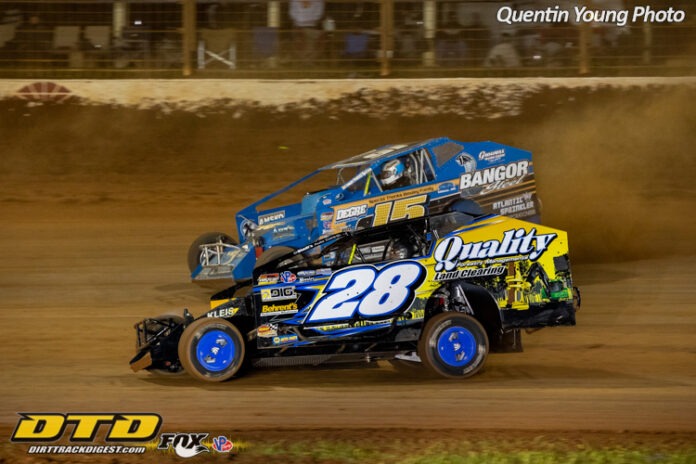 Mike Trautschold isn’t exactly a household name among Northeastern Modified fans, but on Friday night at the Dirt Track at Charlotte, he became a bit more recognized.

He started the night off by quick timing in his group and then ran away with his qualifying heat to get into the draw for the first time in his career. Even though he drew number eight, he wasn’t disappointed.

Sadly, this wasn’t a Hollywood ending as he settled for 17th place at the conclusion of the 40 lapper.

But, talking with Dirt Track Digest after the race he was enthusiastic.


Mike noted, “I have never run here before, but we came off the trailer good and we time trialed well. For a small team, we don’t get to run with these guys a lot. I made a wrong call for the feature, but I hope tomorrow we make the right call.”

Continuing he said, “That heat win was good and the car was working well on what was a racy track tonight.”

In the feature he just couldn’t get the car to go forward and explained, “I made the wrong tire choice.”

This past season he said, “I don’t have a home track and have run hit and miss with the Super DIRTcar and Short Track Super Series. This has been a lifelong dream and I hope we can build upon it. I am not disappointed at all and just hope we can improve tomorrow.”

This fall he has finished 18th at the Eastern States, had a rear end failure at Super DIRT Week in Oswego and has hit and missed some STSS races.

Mike hopes that Super DIRTcar fans will see more of him as the Roscoe, N.Y. resident noted, “I have asked Dean (Reynolds) if we could try to be a platinum driver next year. We have two cars at our disposal, and after years of running open small blocks, we are hoping to be on the tour.”