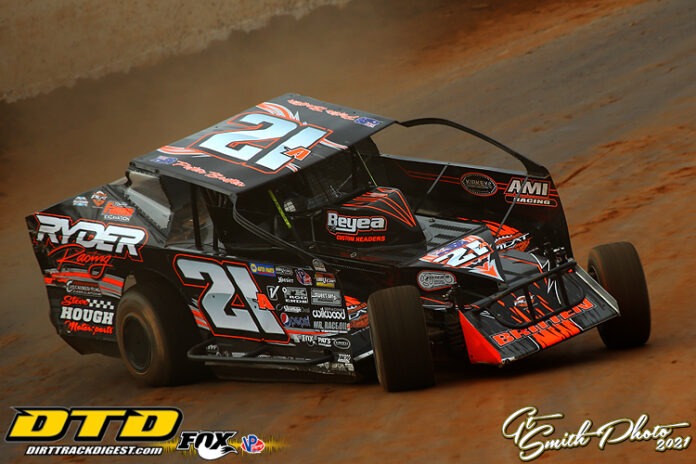 Peter Britten showed speed on both days of the World Finals. After timing up front and running well in the heat both days, Britten finally had something to show for it with a third-place run in Saturday’s 30-lap feature.

Very seldom does the hard Hoosier D500 compound get used by teams. Outside of April’s event at Bristol, the tire compound is used sparingly. Not so much on Saturday night, as the majority of teams picked the hard compound for the short race. Britten was one of few who opted for the softer D400 right rear.

“It’s an absolutely terrible time having to make these tire choices,” Britten noted. “We look at the cars in the LCQ to try and get a reading and see their tires, but even then sometimes that’s not really a great barometer of where you will be. There’s a whole bunch of things that go into track conditions, and you have to try and make the right decisions given that load of information.”

While Britten finished third, he was left aggravated at himself for his decision and driving.


“Shortening the race definitely changed my decision on tire,” stated Britten. “I spent a lot of time worrying I made the wrong decision out there once I was in the race. I spent a lot of time conserving, and after the race I wanted to give myself an uppercut when I saw how much tread I had left. I guess that means I did a good job saving, but could’ve ran a ton harder during the race.”

Britten had spent many laps inside the top five in a number of the late-season events, including leading roughly three-quarters of Oswego’s 200-lap event during Super Dirt Week. Britten showed more speed at Port Royal the next weekend, and continued this weekend.

“You got to have good people around you, good equipment, and make the right decisions,” Britten said. “For the most part, we’ve done a good job of that late in the season, just things haven’t gone in our favor quite a few of these events. I felt we’ve been consistent most of the season, so this isn’t a total surprise to us now that we’re putting everything together.”