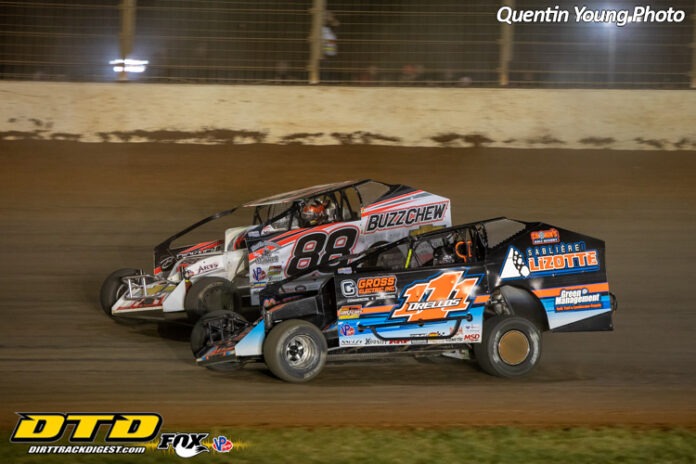 One driver who finished inside the top five both nights of the World Finals was Demetrios Drellos. The young driver from Queensbury, NY showed loads of speed at the end of each event, making late runs to finish fourth in each race.

“I don’t know what it is about here, but we just roll really good,” Drellos said. “It’s one of my favorite tracks without a doubt. We went with some really aggressive tires tonight and it paid off. Friday night, most people went softer tires and we went hard, it showed at the end of the race for sure. This weekend was a lot of picking the right tire.”

While tire strategy was key for Drellos this weekend, he made sure he had the best bullets he could for battle to take advantage of that strategy.

“There’s a lot of prep work that goes into these big tracks,” Drellos said. “Making sure you got the right motor package is big. We had a fresh engine this week and a fresh chassis, so we prepared the best we could for this. That’s super important at these places where the speeds are so high, making sure everything is fresh and ready to go full bore.”


Outside of Charlotte, Drellos’ best finish on the Super DIRTcar Series this year was at Bristol. At Bristol, Drellos nearly took down Stewart Friesen for the win, but settled for runner-up.

“I just love racing this red clay,” noted Drellos. “It is a lot more abrasive than what we got most places up north, but something about it just clicks well for me, I know some guys don’t like it. I really look forward to racing down in this area every year. High speeds, big event, and I’m happy we can run good with so many people watching.”