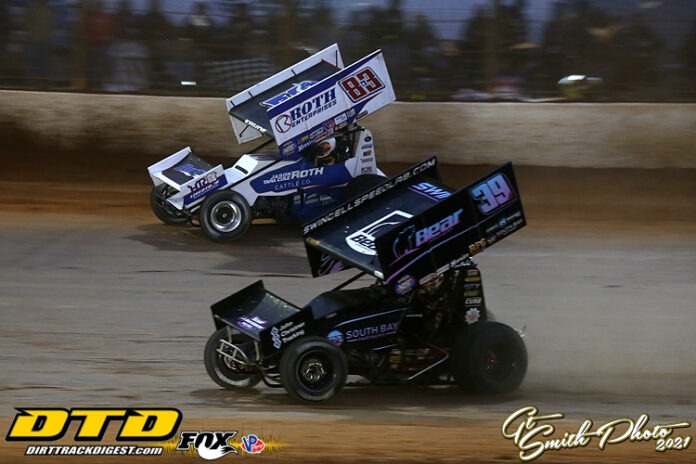 He has driven to the Indiana Midget Speedweek Championship this year and earned the crown at the prestigious Trophy Cup for 360’s in California.

However, this past weekend he found himself in a star studded Sprint Car field with the best of the best at The Dirt Track in Charlotte, N.C., behind the wheel of the Swindell SpeedLab No. 39.

However, it didn’t go as well as he had desired.


Though qualifying 11th in his flight each night, he battled to get to the A-Main.

On opening night he was seventh in his heat and ended up a couple spots out the feature with a sixth in the last chance race.

He qualified on Saturday with a fifth and headed for the main.

Once again luck turned against him as he found himself in a melee that saw Jac Haudenschild and Paulie Cologiovanni upside down and James McFadden and himself damaged. The crew went to work on the front wing, but it was all for naught as he was never able to get back in and finished 25th.

Kofoid talked to Dirt Track Digest entering opening night’s action and said, “I ran a couple of Sprint Car races earlier in the season with these guys, but I have been really busy with our Midget program. It is really good that we are free to run the World Finals.”

Of the track he noted, “I really have nothing to compare it to. With the sweeping corners it is super fast.”

However, he said, “I enjoy Sprint Cars and Midgets are fun. I’ve raced the past few years mostly in Midget, but I think running a Sprint Car from time to time makes me a better Midget driver as you can carry over some things from one to another.”

Buddy runs with the legendary Keith Kunz Midget program as he said, “Last year I was pretty good with the Kunz team and I came back knowing a lot more. Jarrett Martin is my crew-chief and we hit it off really good.”

There is a huge list of drivers running for the Kunz fleet, but Kofoid indicated, “I basically try my own things.  Jarrett and I put our heads together. I feel good that we have a good handle on what we want to do. Once in a while I might have some conversations with Daison Pursley, but otherwise it is just Jarrett and myself.”

Kofoid hails from the bull rings of California and upon his moving to race in the Midwest and East noted, “We run all shapes and sizes of tracks out there, but there are not a lot of big tracks other than Calistoga. Tracks are heavy and you really hook up. The dirt is different in the Midwest than it was in California, but I feel that California really helped me when I came this way.”

Continuing he explained, “You have to get very aggressive out West and I have been able to carry that over to here.”

Kofoid indicated many people have helped him get to where he gotten to.

At the age of 19 he has been behind the wheel of a race car since the age of four.

He said, “A lot of people have helped me. Bond Suss in pavement and Jarrett and Keith in Midgets. Kevin Swindell and Mike Linder along with Paul Silva have all helped me in the Sprints. I am thankful to all.”

So, the weekend in Concord, N.C., might not have gone as well as he had hoped, but there is no doubt fans will see and hear the name Michael “Buddy” Kofoid for years to come as he is one of the up and comers in open wheel racing.