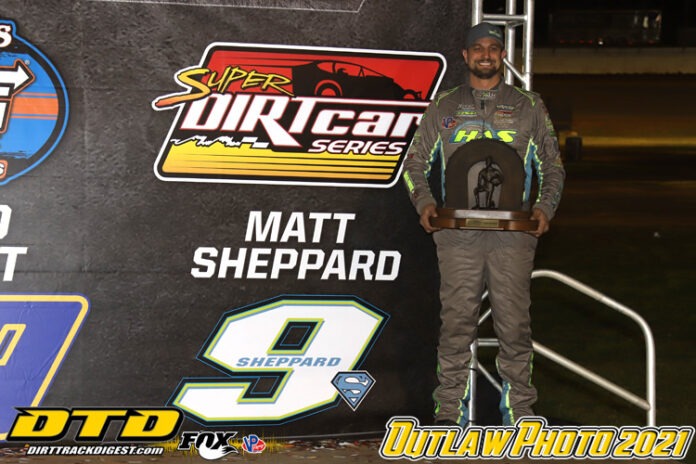 To quote Dwayne Johnson, better known as the Rock, “The Champ is here!”

Matt Sheppard is now an eight-time series after an impressive 2021 that saw him lock in the Super DIRTcar Series title prior to making his way to The Dirt Track at Charlotte for The World Finals.  Sheppard only had four wins, but earned 11 top five finishes and 16 top 10 finishes in 19 starts.

“We started the series poorly this year,” said Sheppard.  “I don’t know how many races it took to get a top five.  Once we turned it around, I feel like we finished as strong as any other year.  That was the key.   Once we turned the corner, we had a lot of good finishes at the end of the year.”

Sheppard came to Charlotte with the title already locked up meaning he didn’t have to worry about points or where he finished.  On Friday he was outside the top 10 in the finishing order of the feature, but on Saturday night he was in the hunt for the win before finishing in the runner-up position.


“I was way more relaxed,” commented Sheppard.  “This is a totally different feeling.  It was hard to get into the weekend as much.  I’m just happy to come out of it with a strong finish tonight.  To win the championship is big.”

To win eight title is impressive.  It moves him into company with Brett Hearn, which is unprecedented as no one else has reached that pinnacle in the sport.  Saturday night Sheppard to see firsthand how good Hearn is as he finished second to him in the feature event.

“It seems like yesterday I was a little kid sitting in the grandstands at Canandaigua watching guys like Brett, Barefoot (Bob McCreadie), Alan (Johnson) and Danny (Johnson),” said Sheppard.  “I’m kind of fortunate to be in that crossover period when I got going that I was racing with all those guys.

“It is really cool.  I’m a little bit of a history buff.  To be a big race fan, watch those guys growing up and to race against them.  You got the new guard coming up.  Alex whipped our butts last night here and Matty Williamson won the championship two years ago.  This just feels really good.  I’ve had a really good run here the last 10 to 12 years, but I’m very fortunate to surround myself with some really good people.”

It was another title clinched in North Carolina, which is always special for any Northeast driver considering the large crowd that is in attendance each and every year.

“It’s really special,” stated Sheppard.  “My first championship was the first year they brought the Modifieds down here.  It’s been good run for me ever since.  To put on a good show, be in contention and show the fans what we had and why we are the champions tonight, it really means a lot. I got a lot of great people helping me out.  So many sponsors, family, friends and my girlfriend, I couldn’t do it without all these great people.  I’m just very fortunate to be standing where I am.”