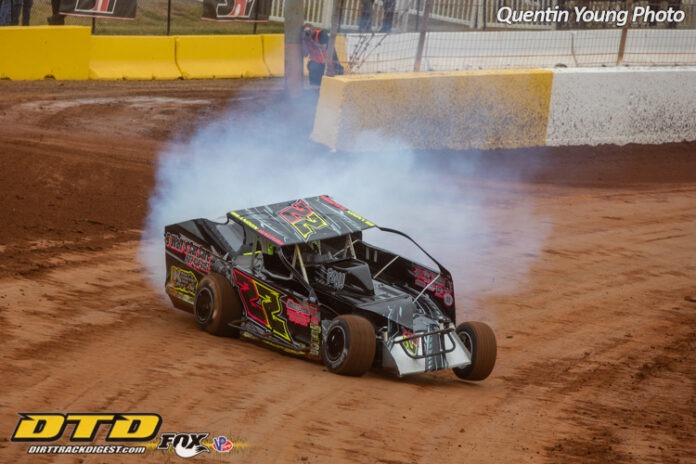 Super DIRTcar Series platinum driver Brandon Walters made his return to the tour in 2021 after trying it for the first time in 2017.

Walters said, “That first year we just didn’t have the equipment. We had just one motor. However, now we have two or three motors as well as two cars.”

The season started slowly, but since September it has been different.

He has been among the redraw and been running significantly better than early in the season.


Brandon said, “I switched to an updated chassis. We ran Bicknell and still do, but it is updated and we have a good Morrison motor. So far we have done much better. I came back to the tour as running weekly costs the same amount of money and I thought if I am spending this money there I might as well run the tour.”

So he came to Charlotte looking for continued improvement.

He noted, “You need to have a lot of motor to run here and we put it in on Sunday night and left on Monday morning.”

Sadly, racing can be a cruel sport and as the 22 rolled out on the track for the first hot lap session of the weekend lightening struck. Before he could even get in two laps the team lost the motor and he loaded up,

The World Finals effort was over before it even began. The expectations could not be realized.

However, not only has his racing improved, but at the same time his t-shirt sales have be realized. significantly.

But, Brandon did benefit in a totally different area.

With the new political slogan sweeping the nation Brandon’s name inadvertently resulted in what has become a successful t-shirt merchandising campaign.

It all started on Super Dirt Week Sunday as he explained, “I was sitting on the right front tire of my car when that youngster uttered the phrase. People were cheering and even though I knew what the phrase meant I thought maybe they were cheering for me. However, one fan yelled at me and said, ‘They’re not cheering for you asshole.”

Walters admittedly isn’t very political, but said, “I took that and ran with it. I figured if I can’t sell racing t-shirts and that some people liked politics.”

So the “Let’s Go Brandon” with him standing at the presidential podium and “Brandon Walters Make Racing Great Again” t-shirts appeared on the back of his race car as it is parked pit-side.

Knowing that North Carolina could be a good market for them he had several printed.

He concluded by saying, “I would hate to be a liberal and have that name now.”