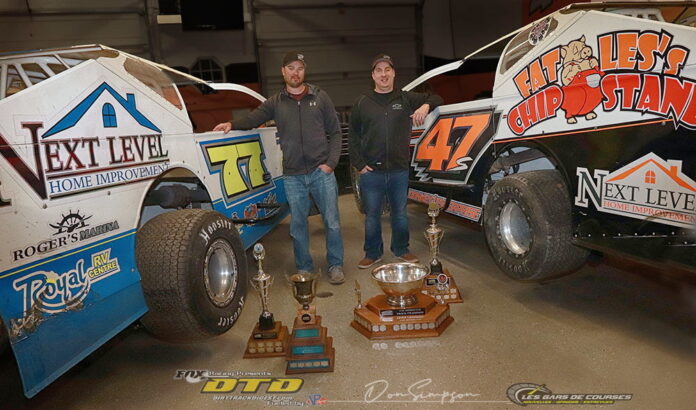 Cornwall Motor Speedway’s 358-Modified champion Corey Wheeler is already preparing for the 2022 season after capturing the title at his hometown speedway. This, the second championship in subsequent years, has not eased his drive to do more and, in fact, it has only strengthened his resolve to become better as a driver and a team. 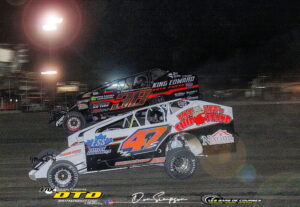 Team Crew chef Justin Demontigny explained, “Winning the Modified championship at Cornwall is a feeling that most people strive to do throughout their career and we have been lucky to achieve this twice now.

“We’ve been fortunate enough to have good help who focus on what needs to get done. We work hard every other night during the week after work to prepare for Cornwall every Sunday, and it’s been paying off for us. After winning the championship in 2019, we knew it was possible to do it again. We struggled a little bit at the beginning of 2021, but later into summer and fall was almost like nobody could stop us. Overall that is our best season to date in the 358 class considering how much talent there is in the field week after week. We cannot wait for 2022 to get rolling and hopefully get going exactly where we left off.”

This passion for racing is nothing new for the Cornwall Ontario Driver. In fact, racing was introduced to Corey years ago as his mother worked at Kirkey Racing Fabrication for many years and his father has always been an avid racing fan.


As in past years, Corey started the season off slow and did not get a podium finish until the third round of the season where Corey picked up a second place. From that point on, Wheeler was back in the game. Consistency in past seasons had paid off well, so this same plan was used moving forward for the remainder of the season. The team nonetheless did not see their first win until August 15, but once they tasted victory three more would soon follow at Cornwall. 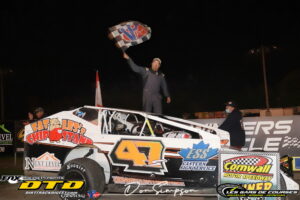 Corey won four races in 2021 at the Cornwall Motor Speedway, but even at that, the points chase this season was one of the closes in recent memory. A mere 64 points were separating the top five in the championship battle.

In the end, Corey inched out long-time rival Kyle Dingwall by 10 points to take the championship.

“What a great season, but I have to say thank you to my team as they are the ones who got me to this point,” stated Wheeler.  “Justin, Joel, and Tammy have been around a while now and certainly know the ropes. With the addition of our old tire guy Matt and Cory joining the team, it took some of the workloads off of the others! Justin does a great job as our crew chief. Joel is always making sure everything is well maintained and looking good, and Tammy pretty much takes care of us all.” 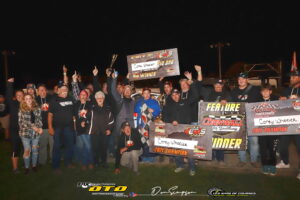 Les said, “Corey and his team are very focused on the car spending a couple nights away at Corey’s race shop making sure the car is perfect week in and week out. I usually send them pizza and wings from my Bonville location to the shop to make sure they’re fed while working on the car.

“Winning the Fat Les’s Chip Stands Canadian Nationals means a lot to me and my family. My dad is one of Corey’s biggest fans and winning it the past two years is exceptional. My mom was also a huge fan of Corey’s and she would have been so excited to see him win before she passed away. She used to sit in the booth and use her right foot to help Corey drive faster. It’s been a dream for me as a sponsor and we have a bunch of great groups of sponsors besides myself that make this team the perfect team to be involved with.” 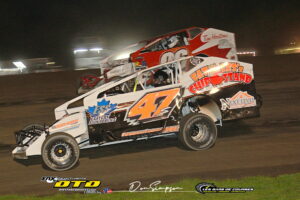 The team also flexed its muscle somewhat this season by taking on the best at this year’s Brighton Applefest, where Corey finished first on night one of the two-day show. Corey then finished a close third in the feature of the event.

One week later, Corey was in victory lane on the first night of racing at the Brockville Ontario Speedway’s Fall Nationals. Wheeler took the green of the 60 laps Ogilvie’s Auto and Fleet Triple Crown Series for the 358 Modified and never looked back. This was a fitting way to close out this with a win.

Corey stated, “It was a lot of fun competing away from our home track, especially after picking up the win at Brockville. We also won the dash at Brighton the week before, but came up short by one spot on Saturday at the Applefest shoot-out after working our way up from our 12th place starting position. It clearly shows how great a crew I have behind me and how much those guys have learned and the experience they have gained over the years.”

Moving forward into 2022, Corey as in past years will put all his efforts towards Cornwall Motor Speedway as he defends his track championship. The team    also hopes to race in a few selected events here in Canada and south of the border, if all things fall into place in regards to work and home life. Corey explains “We would love to have more out-of-town success in the future. If things work out for next year, tackling the Quebec tracks a little bit more would be nice as some of the best drivers in our class are from there. But having success at our home track is certainly our priority. We are lucky to have the sponsors we have and are always looking for more partners as we try and move forward.”

So wherever the number 47 race hauler shows up in 2022, you can be sure Corey will bring his A-game to the track, focusing on that next win.