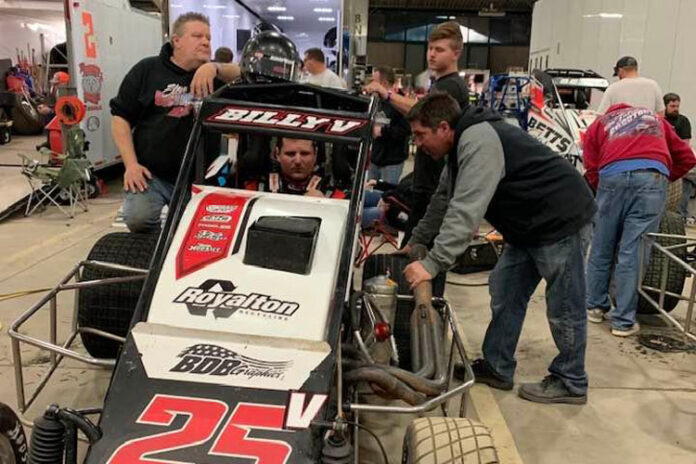 East Coast Modified and USAC East standout Billy VanInwegen simply hasn’t given up on being successful in the formidable Chili Bowl field.

Well, this week has been significantly different for him as he will be in the better end of the alphabet soup features on Saturday.

Dirt Track Digest reached out to him after his preliminary night and he generously responded.

Billy said, “This is my third attempt and all three times I’ve driven Steve Buckwalter’s cars. I had come up one spot short of making the prelim A main my first two times out here. So my primary goal was to get into the show. We were able to do that as we went from sixth to third in our heat race. That put us 21st in passing points so we started on the pole of the qualifier. We ran third in that race which gave us just enough points to lock into the show in the 16th spot.”

Continuing, he talked about the prelim main and said, “In our A-Main I got shuffled back to almost last, due to jumping the cushion, but we were able to claw back through a little ways to 14th which puts us in the C-Main on Saturday. I am looking forward to racing with some of the best drivers in the country in that one.”

The huge Tulsa Center is unlike anything else that he has run and explained, “The atmosphere in the building is electric with a ton of people and the racing is intense. I love it. It’s one of my favorite evens all year. I have a great team to race with here with Steve and his guys as well as using some of Timmy Buckwalter’s knowledge now that he a Modified guy like myself.”

Thursday night Billy and the rest of the Buckwalter team had no time to sit back and watch the racing action as Steve had an accident that tore up the entire back end of the car.

Billy, along with the team and others in the pit area, rallied to get the car back in action for the B-Main where Steve drove it to a qualifying spot in the A.

VanInwegen said, “The frame was pretty tweaked. It broke off the shock mount that needed to be welded on, as well as every other component on the rear end suspension. It was incredible how it went back together and he put it in the show. It was a very cool story.”

This past year Billy spent plenty of time in the USAC Eastern Sprint Series and noted, “I think the USAC East experience helped me with the wingless racing some. I have to thank a few people who made this possible…my parents, Johnson and Conroy Insurance, Thunder Mountain Speedway and Turn 1 Tavern as well as NG promotions.”

So open wheel fans have their drivers to cheer for, but the variety of this event that drew nearly 400 midgets also provides East Coast Mod and Sprint fans with some favorites to watch and on Saturday Billy VanInwegen, Steve Buckwalter and Tim Buckwalter will all be running high up in the alphabet soup and will be representing that group very well.