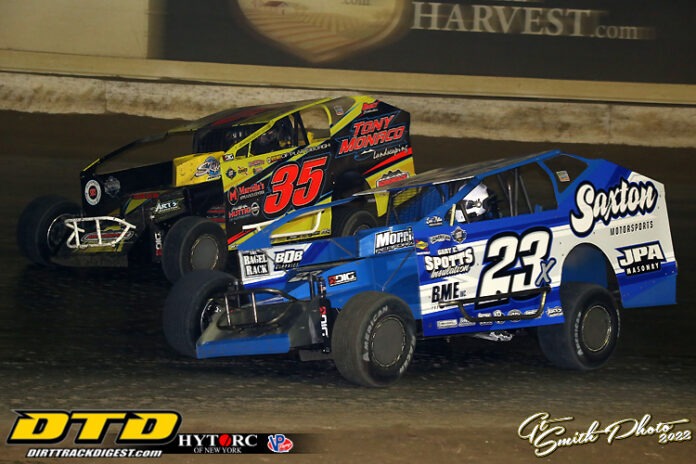 It is quite difficult to believe that Larry Wight had never before captured a Short Track Super Series event, but on Thursday night he became the 35th different winner.

Wight took the lead coming off the fourth turn on the fourth lap, and though chased by Erick Rudolph and withstanding several yellow flag restarts in the final five laps, he picked up one of the most unique trophies in racing.

In illuminated rising sun was presented to him in victory lane and he said, “That is a pretty cool trophy! I think dad and I or mom and I are going to be wrestling for that trophy to see if it goes to New York or stays here in Florida.”

Once again for the majority of the race the yellow stayed in the holster of starter Joe Kriss.

Rudolph really put on an early race show as he started eighth and quickly dispatched several competitors to sit in second place by the eighth lap when he went under Billy Pauch Jr., in turn one.

However, when the track locked down it was what it was and Erick’s run was over.

In the waning laps of the race Tanner Vondoren brought out the yellow for a flat tire, Jeff Strunk got jammed up in turn one and Jeff Taylor tried to go around him. However, the 11T caught the spinning car and stood on two wheels nearly going over. He was one of the few cars towed from the track all night long. Late in the night the team was seeing if there was any frame damage. Jeff has his dirt legal big-block car, but isn’t sure what he will do it there is a major problem.

Taylor contacted Dirt Track Digest after the event and said, “A few bent parts, but we should be good to go tomorrow. It won’t look as shiny.”

Peter Britten was running in the top 10 when he sustained a flat tire in the late stages ending his night.

Once again it was a decent run for Billy Pauch Jr.,  while ‘The Doctor’ Danny Johnson might have had his best run in a long time on the STSS tour. Asked about it Danny said, “Heck I don’t know. I’m not a statistician.”

Danny Creeden rallied from a failed MSD box on the first night to fifth.

Mike Mahaney’s team has been chasing a bug in the car this week and he came from the consi to 11th.

Brett Deyo stood before the gathered drivers and thanked them for a great first night of the Sunshine Swing.

The next sentence left everyone feeling pretty good as he said, “More than 56,000 people watched Flo last night which was the best Modified viewed race ever”.

Drama started immediately as some weren’t as far up as others due to the draw. Peter Britten lined up ninth and it was a low hugging run down the backstretch that saw him pass six cars to get to third on the very first lap.

Early on Michael Maresca and Mike Mahaney battled for fifth and that confrontation would last right until the finish line as the 7mm was just ahead in a photo finish.

It was a race-long side-by-side physical driving conflict between eventual winner Danny Creeden and Tyler Siri.

Jordan Watson, starting fifth, guaranteed himself a top 12 starting spot with a third. This after lining up 28th for night one.

For second consecutive heat race it was a photo for the final qualifying spot as rim riding Tanner Vandoren held off a last gasp run by Rich Laubach.

The most interesting run was Mike Trautschold as he was hanging on to fifth but moments after Billy Decker got him, Mike caught a yuke tire eliminating himself from contention.

Matt Sheppard, Billy Pauch Jr. and Marc Johnson were the top three on opening night and ironically they lined up in the final heat.

Pauch, from the pole, led the distance. However, it wasn’t easy as Matt was right there throughout and Marc was closing in.

That’s the way they finished.

Bobby Flood was fourth and from the back Alex Yankowski finished in the last qualifying spot.

With two provisionals at stake only three cars were taken from each consi.

Winners of the consis included Mike Mahaney and Rich Laubach.

Following Mahaney were Decker and Pessolano while second and third behind were L.J. Lombardo and Bowman.

Consi yellows included Drellos getting jammed up and clipping an infield tire exiting turn four. Darren Smith got a flat, pitted and came back for fourth, which on opening night, would have got him into the 28 car field.

Halfway home in the Sunshine Swing and with laps increasing, money increasing the level of competition should also be on the increase in the final two nights.