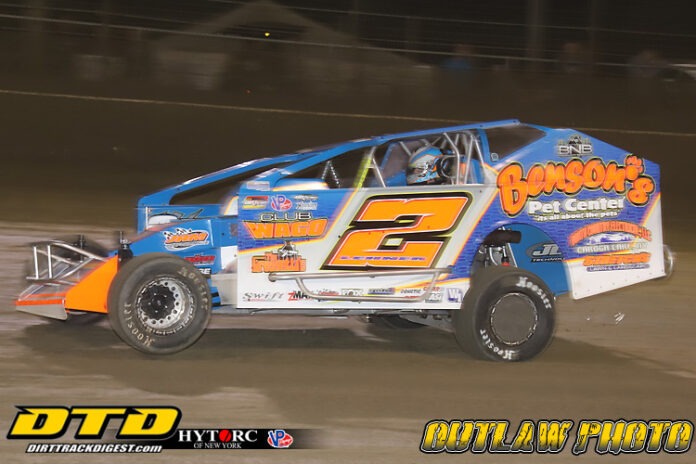 Jack Lehner towed his car over a thousand miles to be racing in this week’s Super DIRTcar Series shows at Volusia.

And there he was after his heat action looking at a heavily damaged brand spanking new car.

Was his night done?

Jack told Dirt Track Digest, “Max (McLaughlin) hit the holes and got out of shape. I was trying to set up to pass him and he spun. I had nowhere to go. Damage was heavy.”

However, when he reached the pits other Super DIRTcar Series teams rallied together to get Jack back in action.

Lehner said, “Max and his crew as well as Matt Sheppard, Peter Britten and others came to help me and all thrashed to get it back together.”

So the Saratoga Springs, N.Y., area driver found himself in the main as he was the final car to qualify in a loaded B-Main where he followed Justin Haers, Rocky Warner and Matt Sheppard across the line.

He said, “The car was good for the feature as we passed 12 cars, but the conditions and it being only 30 laps really made it tough to make up any real ground. We settled for 16th.”

So it is back in action as Lehner has another four nights to improve upon last night.