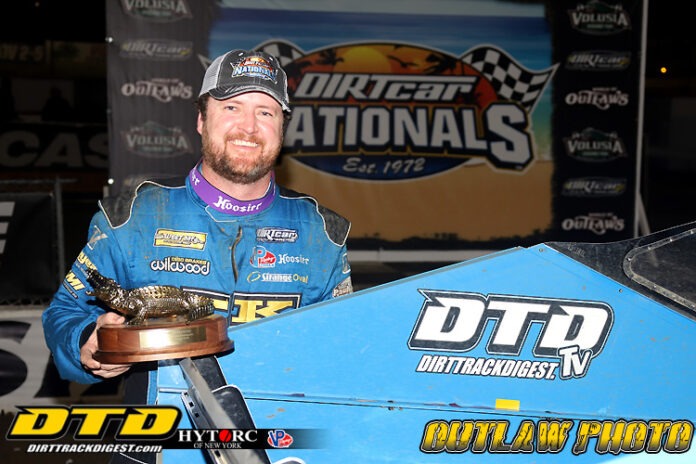 Up until Wednesday night, Peter Britten had been unable to find his way to victory lane in a DIRTcar Nationals event at the Volusia Speedway Park. The Australian driver has had success, just never enough to finish the job.

To open the week on Tuesday, it was more of the same for the driver of the Bicknell No. 21a as he came up one position short in finishing second to Stewart Friesen. It looked like Wednesday night was going to end the same way with him falling short by a position.

Britten was determined to change that. While everyone else moved to the bottom, Britten went for it through the middle of turns one and two and on the top of three four. The track had just enough for him to inch by race long leader Jimmy Phelps for a .025 second victory at the checkered flag.

During the post race celebration, Britten was elated to get the miniature gator trophy, but he wasn’t about to call it a gator. He’s Australian, so it has to be a crocodile.

“To get a little one is awesome,” Britten told Dirt Track Digest after the win. “I’ve been coming down here for almost 10 years now and we’ve had a whole bunch of seconds, thirds and good runs, but have never been able to get that win. Just to get that, I feel relief and joy. It’s one of the most coveted trophies in the sport.”

Britten is off to a hot start at Volusia after a disappointing start to the Florida campaign at All-Tech Raceway. He used that as motivation to get things rolling at the DIRTcar Nationals and it’s done just that. He knew he needed to be strong from the start.

“When you’ve got a long week like this and you unload fast, you’re tweaking, you’re fine tuning,” mentioned Britten. “It seems like these deals if you don’t unload with speed you chase it all week and you rarely find it unless track conditions change.  It obviously helps to be fast off the trailer.

“Now we can keep tuning. We’re far from perfect. It’s been a handful to drive. We’re fast, but come feature time it just seems like we don’t have the car setup perfect. I’m kinda having to really drive my balls off just to get the car around the race track.”

Britten started the race from the inside of the second row one spot behind night one winner Friesen. He dropped a position in the opening laps falling to fourth. The turning point was a lap nine restart that allowed him to jump from fourth to second on the outside. He tried to stay up there and it just didn’t work. That allowed Jack Lehner to retake the runner-up position from him as the race reached the halfway point.

“I didn’t feel good at the start of the race,” stated Britten. “My car was just bouncing too much and I just settled in. We had a restart and I was able to get by Stew and Jack to get to second and I really thought I could make a good run at Jimmy then.  It was just too treacherous up there (on the top) and I ended up losing a position to Jack. I really didn’t feel good so I just kinda fell down to the bottom and ‘I’m like okay, that’s probably all it’s gonna be tonight.’”

Although he got in line, Britten isn’t one to go down without a fight. As the laps clicked off, the leaders found themselves in traffic slowing the pace. Phelps and Lehner began to come back to him.

“I just kinda stuck with it, stayed in line and all of a sudden I’m catching up to them (Jimmy and Jack),” commented Britten. “I saw they were behind lapped traffic and I saw them trying to move up and down, but no one wanted to get off the bottom. I knew if I got to them I was gonna give it a crack.”

And give it a crack he did. He went through the middle in turns one and two trying to avoid the holes that developed. Tuesday night one of the rough spots bit him and the threat was there that it could happen again. It didn’t matter, he knew he to give it a go.

“I knew right up top wasn’t working, it was too far around and too treacherous up there,” he said. “It was treacherous in the middle too, but I felt like my best chance was to try and drag my left side (tires) in the bumps and just get a good run off. It’s a lot shorter distance, especially off turn two.

“I was hungry for it. I wasn’t just going to follow the leader and finish third. I was gonna go for it and knew that was my best chance. I knew it was going to be a little hairy, but fortune favors the brave…or the stupid.”

Britten gained ground the final two laps and found just enough exiting turn four allowing him to sneak by Phelps and steal one away from another driver who was also looking for his first DIRTcar Nationals win.

“I can’t say that I ever really knew that I had it,” Britten said. “I just went for it. I got a really good run on the second to last lap in the middle of one and two. I got a good jolt and that kinda propelled me to be in position to fight with Jimmy. Then it was just so hard to hit three and four well. It’s hard to hit anywhere well unless you’re on the bottom. So I don’t think I ever knew that I had it, I just knew that I had a good shot.”

With a first and second place finishes to start of the week, Britten leads the big gator championship chase. He’s not worrying about it just yet as there is still a long way to go with three races remaining.

“The little one is important enough,” stated the former Albany-Saratoga Speedway champion. “I don’t want to think about the big gator. Obviously, it’s going to be on my mind, but the old saying is one race at a time. If you do well every night, then the big gator takes care of itself. I’m not going to change anything really to try to win the big gator. I’m just going to try and be fast and win races. If I do that it will take care of itself.”