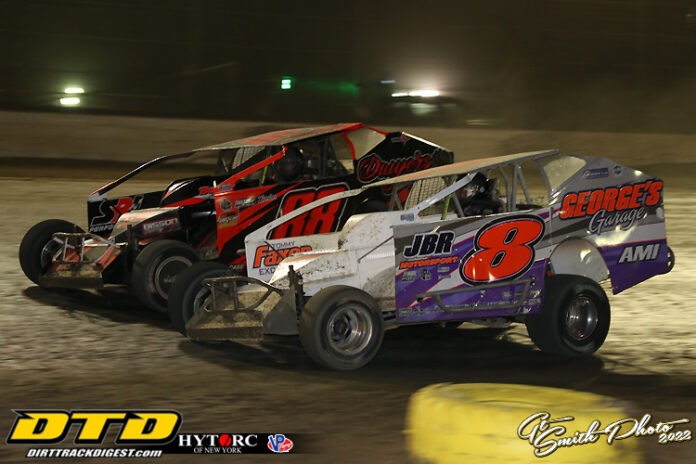 Rich Scagliotta had the most consistent DIRTcar Nationals of his career.  Scagliotta scored a pair of top five finishes to end cap the week while only finishing outside the top 15 one time.  His ended the week sixth in points, 97 back of champion Jimmy Phelps.

It was a career best for Scagliotta as he got back behind the wheel of a Modified after limited action in 2021.

“Best week I’ve ever had here,” stated Scagliotta.  “This is a car I only ran four times.  It is the most comfortable thing I’ve ever raced.  Peter (Britten) let me use one of his motors and the rest is behind us now.  I’ve got a lot more confidence back with being down here.  I had a really good week, it’s all a blur right at the moment.”

He believes he found success by trying to do things a bit differently this time around.  He followed Britten at times while also focusing on running some different lines that he wouldn’t normally run.  It proved to be the main reason behind his success.

“It’s about being in the right position,” stated Scagliotta.  “I made a lot of good choices during the week. I’m normally a guy that drives around the bottom, but I felt comfortable the first night.  I followed Peter around.  He kind of has the same car as me.  I’m not as talented as him, but it’s about the entry.  If you get the car entered where it needs to be, that is half the battle.”

Scagliotta only ran a handful of times last season due to work commitments.  He ran the car at Albany-Saratoga Speedway while also competing at The Dirt Track at Charlotte during The World Finals.  It look likes it will be a similar schedule this season for the Bound Brook, N.J., pilot.  He’ll race as time allows.

“I didn’t race a ton last year,” mentioned Scagliotta.  “I have a lot of work at home and that is the priority.  I really like racing, but the hard part is getting away.  I don’t know if I’ll race that much Friday night with Peter’s deal at Albany, he really doesn’t need to bring my car.  I’ll probably race Canandaigua a couple times, hit some DIRTcar shows if everything lines up.  We’ll see how it goes.  I got a nice car and look forward to a little more.”

The 59-year-old driver was complimentary of everyone around him that helped him have such a successful week.

“The car worked well all week,” Scagliotta said of his Bicknell.  “I’m happy for my crew, Peter and all those guys.  They have a lot to do with this.  Without them I’d be setting in the stands.  Everything is good and life is good right now.”