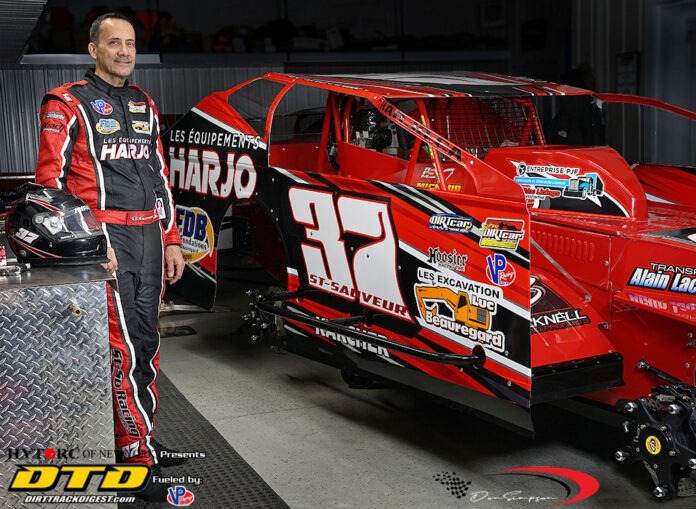 This year will be Paul Saint-Sauveur’s final full-time year as a driver — a time of reflection, but at the same time, of optimism for what the future holds for Paul. For the second time in his career, Paul will compete in the entire Super DIRTcar Series this coming season, a significant challenge for this small team. 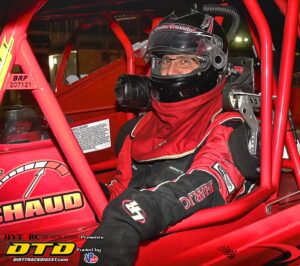 Paul, 57-years-old, has dedicated 39 years to the sport he loves behind the wheel. He would like to slow down and enjoy other aspects of life with his life partner Nathaly Simard. Paul will remain involved with the sport in some other manner.

This adventure in racing began back in 1974 when Paul, a young boy, lived just a short distance away from the Autodrome Drummond. Each race night, Saint-Sauveur ran over to the speedway to watch the action on the track. The young fan soon began helping with simple tasks around the race car of the long-time racer Frank Hodge.

Paul’s family moved to Longueuil, Quebec, a few years later, bringing his racing dreams with them. He had no method of going to the track because he was just 12-years-old at the time, consequently, that was the end of his race track adventures. But fate would intervene, as Frank Hoge just lived a few blocks away from Longueuil, allowing this friendship to continue. Hodge, a wily driver who started racing in the mid-50s, took the young fan under his wing and brought him to the track from time to time as part of the team.

“While I was working alongside Frank Hodge and Donald Plouffe (Frank’s mechanic) I was heavily influenced by them. Without their assistance, I would never have become as involved in the sport as I am now,” Paul explained.

In the early 80s, with the help of his friend Frank Hodge, Paul decided to try his hand at racing.  In 1983, Paul began racing in the Mame Amateur.

In 1985, the then 21-year-old driver, had improved his talents by leading the class after two years behind the wheel. Paul won 14 races that season between the Autodromes Drummond and Saint-Gregoire, winning the track title at the Autodrome Saint-Gregoire.

After purchasing a Modified car from Gilles Noel, Paul set his sights on following his mentor Frank Hodge and earning a spot in the big-block Modified division. Things, however, did not get off as planned in racing the big-block. The car was missing a number of parts, forcing the young Paul to scramble to get the parts needed to race.

From 1986 until 1989, Paul ran in big-block competition. He then reluctantly left the sport he loved after the ’89 season. Paul would not get behind the wheel of a racing car for 18 years, and when he did, it was in the Sportsman Modified division.

Harold Wilson, a much-loved friend, and sponsor of Team St-So Racing was back again in 2007 with Les Equipements Harjo. Paul returned to the Modified division in 2010, where he remains to this day along with competing in the Big Block Division driving the number 37 Les Equipements Harjo-sponsored car.

In 2014, due to circumstances at team ONE, Paul stepped aside, allowing David Hebert to take over the driving duties of the 37 machine at the Autodrome Granby. Paul then took the reins at the Autodrome Drummond.

Hebert won three races at Granby, one of which was the 100th win of his career. David went on to win the 2014 Autodrome Granby track championship behind the wheel of the number 37 Les Equipements Harjo machine.

In 2019, Paul followed his long-time dream and competed in the 2019 Super DIRTcar Series. The team traveled thousands of kilometers crisscrossing the Eastern United States and Canada. A 23-stop series spanned from mid-April to November to the World Finals in Charlotte. Paul in the number 37 Les Equipements Harjo-sponsored car came home in sixteenth place in the final points standings that season and became the first Quebecer to compete in the entire-series.

Then came COVID and two years of racing under restrictions. This did not slow Paul down, but delayed his dream of repeating the adventures of 2019. 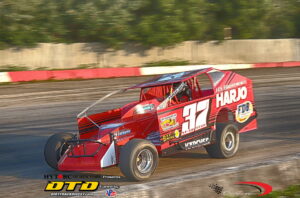 Now we come to today, with the pandemic coming to an end. Paul has once again decided to race the Super DIRTcar Series.

Recently I visited his shop in the small sleepy town of La Presentation, Quebec. Two cars were being prepared in his pristine shop with nothing but the best parts and cars. You could see the excitement in Paul as he revealed his plan for the upcoming season. But at the same time, there was also a feeling of apprehension about what lay ahead in the following years.

In his first few races, Paul is likely to race at Mohawk International Raceway, Malta, and even Can-Am before moving to Drummond to meet DIRTcar rules. The Super DIRTcar Series will kick off in a few weeks with Paul’s first race at Atomic Speedway in Waverly, Ohio.

“The objective this season is to have fun! I hope to better my results from 2019 which would be a bonus, but it is enjoying the experience that counts in the end. ”

Paul has a big season ahead of him, but none of it would be possible without his sponsors, particularly Les Equipements Harjo. However, Paul also stated that it is the team is that makes it all possible.