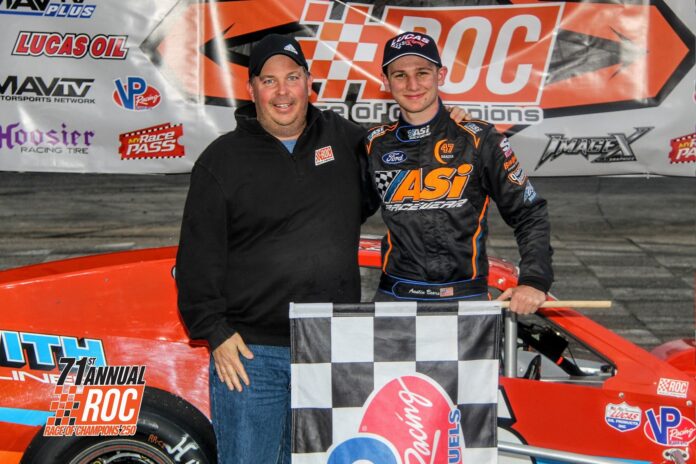 As Bob Dylan’s famous song stated, the times they are a changin’.

Late last year, speedway management led by Al Heinke and Jimmy Phelps, began quietly searching for someone to help take over the promotional efforts of the speedway in the coming years.

“We’ve got some great people that are dedicated to make sure everything that needs to happen around the facility or in the office gets done, but from the leadership standpoint, Al and I and everyone involved have other things that take up our time,” stated Phelps. “It’s not fair to them, not fair to the property to not use it to its full potential. We decided at the end of last year to start searching for the right person. It wasn’t as easy as you think. It took some time, but we feel like we settled on the right person with Joe.”

For Phelps, the decision to step back was a difficult one. He’s helped head the facility since Heinke took over. The pair worked hard to put Weedsport Speedway on the map nationally. As of late though, Phelps finds himself drawn in too many different directions to allow him to give enough time and energy to do everything the speedway needs. Hence the necessity of hiring Skotnicki.

“The biggest thing is it is getting to be hard to give everything 100 percent,” mentioned Phelps. It is becoming evident that Weedsport needs more attention than I can give it on the promotional end. It’s one of them deals when you have so many irons in the fire that you can’t give each of them the attention they need. My kids are getting older, they are going in a million directions with sports and things like that. I have a senior getting ready to go to college. There are definitely things there I can focus on a little more. At the same time, I don’t want to slow down, just want to redirect.

“I felt like the last several years our race team has had all the tools and we haven’t been able to focus on the racing. The trucking company is taking more of my time, energy and brain power as well. The time is right to step back a little bit and bring someone in so we can do some things we’ve talked about for a long time but really didn’t have the time to do.”

Skotnicki has been around racing for a long time and is excited to have the opportunity to work at one of the premier facilities in the country for a team that strives for success.

“I’m really looking forward to it,” stated Skotnicki. “Al (Heinke) and Jimmy (Phelps) have been awesome to work with. It took me a long time to make the decision. I kept telling Al that I didn’t want to let anybody down. As goofy as that may sound, they’ve built something pretty special over there. As far as the facility goes, it is probably one of the top in the country.”

Skotnicki is admittingly nervous about the new position even though he has a plethora of experience in motorsports.

“Once you own your own deal you tend to lose the nervous energy of taking on something new,” said Skotnicki. “You just dig in and do it. No offense to anyone, but when Al started talking about this, I was taken aback. I’ve read some of the press and internet clippings; I know what certain individuals think of me. Why is Al talking to me? He’s one of the top guys in the sport. He owned Lime Rock, teamed with Tommy Baldwin to run in the Cup Series and he’s had an incredible past and an incredible business success. When you have a chance to work for a guy like that you just don’t want to let him down.”

In regards to his own current deals, Skotnicki isn’t going anywhere as he’ll continue in those positions as well while putting attention on Weedsport. He believes he’s got the people in place that can cover for him if and when the time comes with his current promotional efforts.

“We are going to train some folks from within on the Race of Champions side,” cited Skotnicki. “One of the big things that Al was adamant about and Jimmy was on board with, nothing we are currently doing is going to go anywhere. That is positive for everyone that we are involved with. From that aspect, nothing will really change other than how people see me on a race day within the Race of Champions events. There might come a time when I might have to miss one or those or two of those, but we’ve got a capable staff that we’ve built up since 2016 for when that time comes. We aren’t sure when that will be.”

With Skotnicki in place, Phelps isn’t completely leaving Weedsport in the rearview mirror as he’ll be around every time the gates swing open to help where he’s needed. He’s not riding off into the sunset.

“I’ll still help oversee things there from a little broader view,” commented Phelps. “I’ll be there to help Joe, help everyone in the office and assist where I’m needed. Come race day, he’s going to have things under control along with our staff that does a great job and knows what they need to do. I’m still part of the management team, still helping oversee some things, but come event day this lets me back away and race. I think Joe will do a good job making sure everything goes off the way it is supposed.”

Skotnicki will also be relying on Phelps to help him hit the ground running. Phelps has years of experience and time spent at Weedsport. That will be extremely beneficial to Skotnicki as he jumps into his new position.

“I’m going to rely on him a lot,” said Skotnicki. “He knows every nook and cranny and every in and out of that program and that facility. It’s established. I don’t want to go in there and throw a monkey-wrench in that and break it. You are never going to succeed that way. We are going to take the approach of watching, seeing and learning so we can do the best we can.”

Skotnicki, Phelps and company officially kick off their 2022 season at the track when they open the gates for the Heroes Remembered 100 Super DIRTcar Series event on May 29.