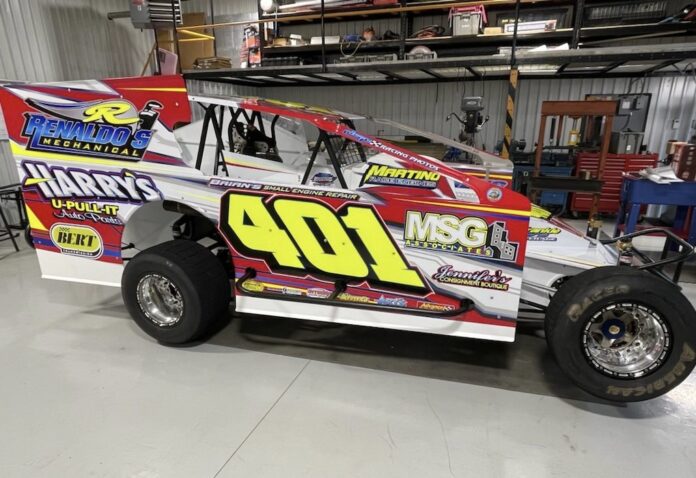 WIND GAP, PA – Multi-time Modified Champion Frank Cozze and car owner Dave Renaldo will be competing every Saturday night this season at New Egypt Speedway in New Egypt, NJ, with the goal of not only winning features, but also the 2022 track championship.

In addition, the team has a new sponsor coming on board this year: MSG Associates in Nazareth, PA, owned by Mike Goffredo.  MSG joins long-time sponsors Harry’s U-Pull-It with 3 locations in PA; Renaldo’s Mechanical in Bangor, PA; Bert’s Transmissions; Jones Racing Products; and Art’s Radiator.  The team will be competing in a Bicknell chassis with a Martino Racing Engine under the hood.

Dave Renaldo first partnered with Cozze, the New Egypt Modified Track Champion in both 2003 and 2005, 6 years ago.

“I first saw Frank race at New Egypt.  It has always been a special place to me,” said Renaldo. “We are ready and very excited to get the season started.”

Rejoining the crew this year after a long absence is Dave Hoffman, brother of late Doug Hoffman, multi-time Modified winner and champion, and brother of Keith Hoffman, also a multi-time winner and owner of Hoffman Brothers Speed & Performance in New Tripoli, PA.   Dave is a seasoned mechanic who had been a member of his brother Doug’s crew and Cozze’s crew before moving out of the area.

In addition to Saturday night competition, the #401 team will be campaigning at selected special racing events throughout the Northeast this year.

Frank Cozze, now his 48th year of dirt track racing, has won championships at New Egypt, East Windsor Speedway, and Flemington Speedway, and has captured 165 career wins at 31 different racetracks during his storied career. One of the highlights of his career was winning the Super DirtCar 200-lap race at the Syracuse Mile in 2008.

There is no doubt this team will be a force to be reckoned with wherever they compete.