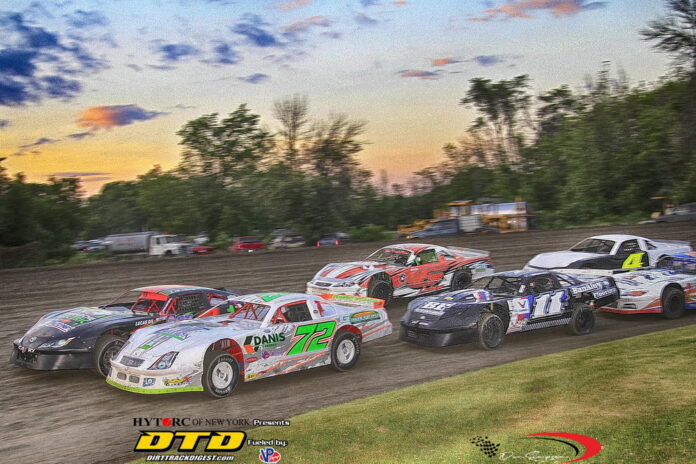 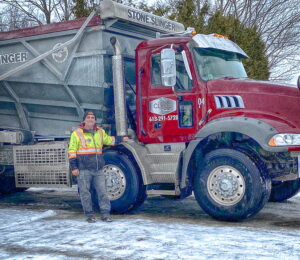 However, the Pro-Stock division has seen a rebirth in recent years, as teams have grown in number and tracks have expressed interest in hosting this class once more. This renewed interest in the Pro Stock division, however, would not have occurred if a few devoted individuals did not believe that the division deserved to be recognized for its accomplishments throughout the years.

Raymond Lavergne, the owner of Cornwall Speedway, began taking action a few years ago to save a class he believed was worth saving.  Raymond has always been a fan of the Pro Stock division and the high level of competitiveness it offers. Lavergne launched a series dedicated to Pro Stock cars with his own money and the help of his sponsors.  The points fund increased as the series progressed, and the series is still going strong thanks to new and returning sponsors.

One of those is Claude Lepage who has once again stepped up to help by sponsoring the new Clyde Sligner Pro-Stock Series. Lepage has been involved in dirt track racing for some time helping as part of the crew on the team Michael Desjardin who ran in the Pro Stock division for several years.  Claude also helped on the Adam Rozon team who races in the Sportsman Modified division. But it was the Pro Stocks that always caught his attention so he decided to help last season with his endorsement and sponsorship of the Pro Stock series.  The series was so successful a number of the Mini Stock Drivers have stepped up to the Pro Stock class. 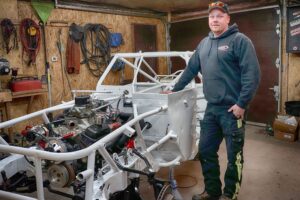 One driver is James Clarke who began racing late in life and has only been behind the wheel since 2019. James got his feet wet in the world of racing by joining the Mini Stock ranks. After one full season behind the wheel James between Brockville and his hometown track of Cornwall picked up nine feature wins along with the track championship at Cornwall. James states that his draw to getting into motorsport was mainly generated by his uncle Frank Bélair and Brian Clark. Brian Clarke raced in the Autocross which was very popular in the 70 and 80s when James was young. He most remembers Uncle Frank taking him to Cornwall Speedway, where he first encountered dirt car action.

Clarke who progressed mid-way last season into the Pro Stocks from the Mini Stocks is excited about what appears to be a new interest in the Pro Stock division driven by newcomers and the return of some of the old guard in the class like Louis Jackson.

Another driver and good friend of James Clake who as stated is following in James’ footsteps from Mini Stock into the Pro Stock is Brandon McMillion. Like James, Brandon started racing late in life and after helping his Freind and fellow race Justin Jordan jumped behind the wheel in 2019. Brandon a first generation racer has been busy preparing his car at the shop and is getting closer to the finish line. Being a first-generation driver I asked 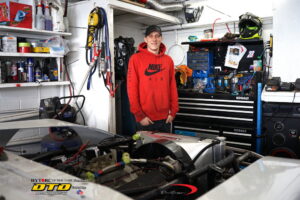 how he got exposed to the sport, Brandon stated, “I’m a first-generation racer in my family. I was a very active child when I was young so my mother always took me to the track where I was most calm as a kid lol. Then once I got older I fell in love with the sport and how competitive it is and was hooked from there.” It will be a transition for Brandon, but like a fellow racer and friend James explained, “we will work together to get things figured out as it is a big change from the Mini Stocks and getting the car set up correctly “.

With the return of the Pro Stock series sponsored by Clyde Sligner, one veteran driver plans to campaign two cars this season, and he is very excited about the direction this division is taking. Marc LaLonde, who has competed in the Pro Stock division at the Cornwall Motor Speedway for years, is well known for having his Students at  Plantagenet Catholic Secondary School where Marc teaches Auto Mechanic to help build and work on the car. Over the race season, the Students then crew on the team as Marc campaigns the car. 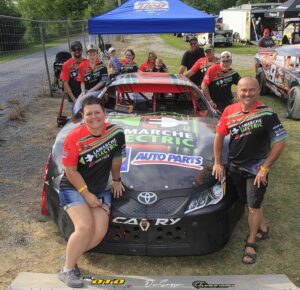 Presently Marc and his students are busy preparing the two cars for the upcoming season. The 2019 Airborne Speedway track champion will also carry Clyde Sligner’s banner on his car this season as Claude Lepage has stepped up as one of Marc’s key sponsors. The two-car team will see Marc behind the wheel of his number 8 car with the second car piloted by former Students who have progressed in Life and have shown a designer to get behind the wheel.

Marc said, “I am at school right now with my students lol. We are working on the race cars. I am very anxious for the upcoming season. I have 24 new students added to my team. Young kids. It’s very nice to see them so passionate about my program. We will participate in Cornwall for sure. I am lucky, Claude Lepage is back as a sponsor as many others. We will have 2 cars. My spare one will be on track very often. I am giving the opportunity to my past students to try the race car and have fun and a way to give back.”

Another team that is jumping into the fray is JLR Motorsports, a partnership between Eric 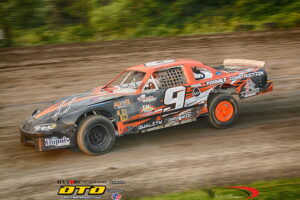 Jean-Louis and Justin Jodoin. Jean-Louis has been racing in the Pro Stock division for several years, but this year he is teamed up with Justin Jordan, a past winner at Cornwall Motor Speedway in the Mini Stock division. This will be a great opportunity for Justin to move up into the Pro Stock division at this point in his career, and with a team that can provide top-rated cars, it is a win-win for both drivers. Justin is both excited and ready to get back on the track and is looking forward to working with Eric over the season.

Justin explained, “Partnering with Eric will give us some advantages with setting up the cars, we can compare notes and learn from each other. For me, the Pro Stocks put on the best show, and with so many cars participating, it’ll be a blast. I can’t thank Eric and my sponsors enough for placing me behind the wheel of their second car and following me into the Pro Stock class.”

Track owner and promoter Raymond Lavergne is much grateful for the support by Claude Lepage.

“I can’t express my gratitude to Claude enough for all of his help over the years. Dealing with COVID and all of its constraints has been difficult in recent years. Over the past season, I have worked hard with all of my sponsors as well as contributing my own dollars to help keep the sports alive. Claude has stepped up to help the Pro Stock Series again. The fact that $3500.00 will be put into the top three in points fund, as well as five $100.00 bonus prizes for teams that participate in all three events, shows the way Claude is committed to the sport. We appreciate everything Claude does for our sport here at Cornwall Motor Speedway.”

The debut of the Clyde Sligner Pro-Stock Series and the addition of more Pro Stock teams suggest that the class is expanding. The moves have sparked interest in Formore drivers such as Louie Jackson and even Dave Seguin, who just retired from racing after winning the championship last year. Both drivers are rumored to be interested in returning, showing the future of the Pro Stocks at Cornwall Motor Speedway is bright.