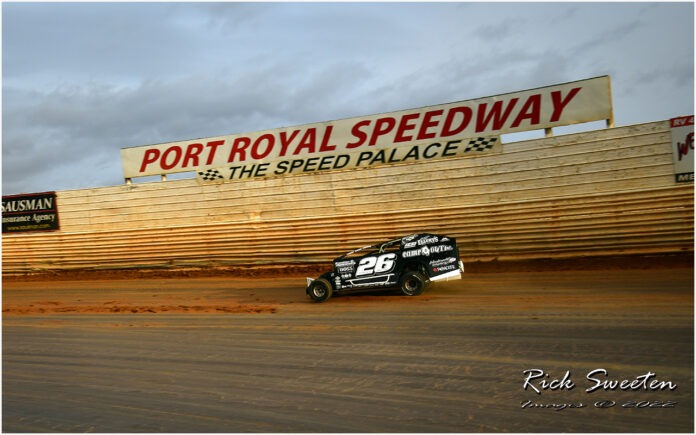 To say Ryan Godown is on a hot streak is an understatement. The Ringoes, N.J., driver has been the driver to beat since he won the Grandview Speedway 76er last September. Since that win which paid $30,000, Godown has won over $100,000 in prize money including the $25,000 he won just two weeks ago at Cherokee Speedway when he won the Short Track Super Series inaugural Halmar Elite Series race.

Trying to keep the hot streak going, Godown towed his No. 26 Bicknell Modified to the Port Royal Speedway in what has turned out to be the first race of the year for the STSS South Series after two previous rainouts.

Godown didn’t disappoint as he made a daring last lap pass of leader Mike Gular to take the win and keep his season rolling along at perfect 100%.

“This is so surreal,” said a happy Godown as I talked to him inside his hauler post-race. “This one was a little tougher, obviously (Mike) Gular had the car to beat. He had a 360 (open motor) and that was a big deal with him being over a 100 pounds lighter. But we didn’t tighten the car up enough and that was my fault, but we just kept grinding.

“I knew Stew (Friesen) was right up on the fence when he got the lead, and he was gone. I just didn’t want to get up against the fence yet.  I felt if I ran up there that many laps it was not going to work out. I was afraid I would knock the tail off or blow a tire and I was just trying to bide my time.”

Godown’s waiting until the right moment to go up along the fence paid off as he made a last lap pass of Gular to take the $5,000 first place prize making it a cool take of $30,000 for the season after winning both races, he has entered in 2022.

“The cautions at the end helped me out a lot as I could ride up there to see how far I could push it,” Godown explained about his last lap winning pass. “The issue I had was Mike (Gular) was running the middle and I only had a second to see where to go in the corner at because you couldn’t go in on the fence, but you had to go high enough to miss that hole between (turns) one and two. If you hit the hole, you would lose time and the lap before the last one, I hit where I needed to be pretty good and I was able to get right to his back bumper.

“I thought I had a chance if I could hit it one more time just right. Coming to the white flag through (turns) three and four I was able to get up really high and keep my momentum up. If I ran the middle, he probably would’ve gotten away from me, but I was able to stay on his back bumper coming to the white. Going into one, I just bonsaied it figuring I was either going to get him or stick it in the fence and it ended up working out as I was able to get a good run off of two to get in front of him. It’s just crazy how it works sometimes, I could do that move again and it might turn out completely opposite. You just never know.”

The car Godown drove to victory on Sunday was a 2021 Bicknell chassis powered by big-block motor.

“This is the car we ran at Bridgeport last year for about half a season,” mentioned Godown. “We put the big-block into it a couple of weeks ago. We weren’t sure if we were going to run this car at Georgetown or our 440 until we saw how the track was going to be. I have a 360-motor sitting on the floor at home.

“These races all come down to tire game or a motor game and it’s really tough to decide which is better for each individual race. We obviously brought a big-block, but we also brought another car with a 440 in it just in case because you never know what you might need. I felt like the big-block was the way to go.  I ran it here in October in the 200 and it drove well but I messed up by not tightening up the car enough.

Godown took over the lead of the race when then leader Stewart Friesen stopped after a lap 15 yellow was brought out for Jared Umbenhauer. However, Godown was never able to pull away from Gular who stayed right with the Ringoes Rocket.

“When I got the lead, it was good for about five or six laps, but then it just didn’t feel as good as it did, said Godown. “Then the fuel load started burning off and it just started getting a little freer and freer. After that, Mike was able to get back by me and it looked like he was going to win but then the car started coming back to me. I don’t know if it was the tire heat or maybe the right front was starting to come in or maybe we were just lucky, who knows.

“We made it work, we got lucky. I wish Mike with all the bad luck he had at Cherokee could’ve held on. It sucks to take a win like that away from him, but racing is racing, and we all come here to win, right? We raced clean, it was side-by-side and it had to be a heckuva a race for the fans to see. It was a good race especially for guys like Mike (Gular) and me who work hard every day at our jobs.”

Going back to a video interview I did with Godown after his Cherokee win, Godown said that he would never give up on his guys who work so hard on the cars if had a chance to get it done.

“That is true, and it goes back to when I started racing when I worked by butt off to get together a Street Stock to race at East Windsor,” explained Godown. “I sucked, but I was racing. Then I worked harder to get that to win, then sold that to get a Sportsman car that I couldn’t afford, but we plugged away at that to get a win in that and that’s how it’s been my whole career. Nothing has been easy in my whole racing career. We always had to work hard, and it anything has taught me this between sponsors or idols or anything for that matter is that you have to work hard for it, it’s not going to be given to you. Any youngsters, I keep telling them this is not for everybody, if you ain’t willing to put the time in you won’t get the results. There have been many years that I didn’t get any results, we always ran good but now things are starting to click.

“Listen, we went to Louisiana and did well and when we came back, we started to prepare for Cherokee right away. We did a lot of shop work over the winter and we haven’t stopped. It’s good to have so many great people around me like my girlfriend Chelsea that backs and puts up with the late nights at the shop and when I have a bad night at the shop or track. Having a guy like Alex who tows the car to the track, and you know me and it’s never just about me, it is about the whole team and that’s because when I was by myself, I knew how hard it was. These guys have come aboard, and they believe in me. If they believe in me, I can’t give up on them and that’s the way I feel and I will never quit on them out on the track.”

Godown has had hot streaks before in his career like in 2015 at New Egypt when he won the first four modified races of the season.  I asked Godown if he ever had a hot streak like this running against the competition that he has faced during his streak.

“I have never had a hot streak like this to start a season,” cited Godown. “I am two for two so maybe I’ll retire now and go out on top. This is great and we just have to work hard and try to keep the ball rolling. Look, you aren’t going to win every race and we all know that. You just have to run good and hope our packages are good enough to keep us upfront every race. We are not always going to make the right decision, like today. We just go lucky we were able to run the top like we did for that one lap. The competition on this series ls unbelievable, look there were 62 cars at Cherokee, 50 cars here today and we drew bad at both races. They say that starting at the back builds character but how about being able to start near the front just one time in the heat but hey we have good cars right now and we have been able to overcome starting in the back in the heats so that shows we have a good thing going right now.”