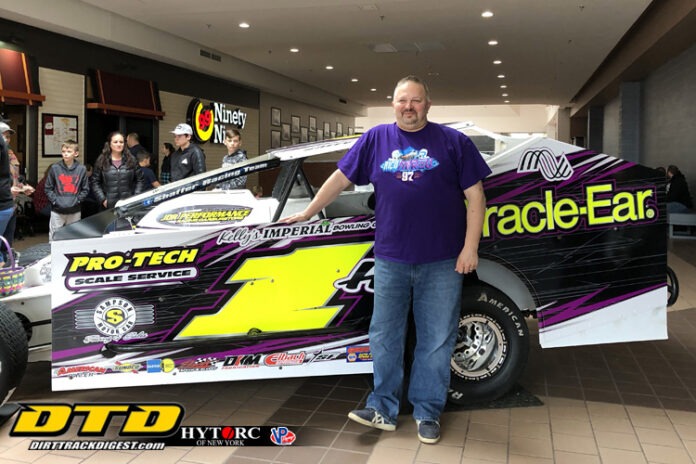 This past weekend was the annual Fonda Speedway car show at the ViaPort in Rotterdam but it was more than just the annual car show, it was a gathering of friends and a collective sigh of relief after two years of Covid-19 restrictions that had put a damper on racing for everyone. 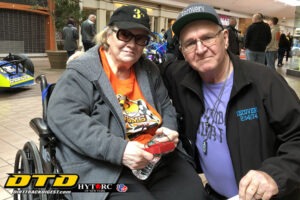 80-year-old, Rita Gorman came to the show with her nephew, Don Thorpe and his family to reminisce with the racing family she has been a part of for many years.  Rita is a charter member of the New York State Stock Car Association (NYSSCA) serving as one of the organization’s first secretaries.  Rita will be at Fonda a couple times this season to enjoy the racing when the Mohawk Valley Vintage Dirt Modified Series is at the track, and will also sponsor a night in her name and as you can see from her hat, she was a big Pete Corey fan, and still keeps in touch with Pete, Jr.  On Saturday Rita was also at the car show for another reason, a surprise planned by her nephew for Ed to present her with one of his “Clean Slates” to recognized her for her 35 years of sobriety.

“Happy” Harry is back!  Harry Shaffer, II will return to racing this season at Fonda after an injury sidelined him for the 2020 and 2021 seasons.  And as you might guess, Harry is very happy to be returning to racing and plans on racing Saturday at Fonda and Sunday at Glen Ridge when possible.  Two years, and the cars have changed quite a bit says Harry and he 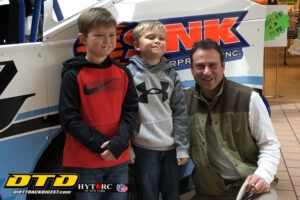 is eager to get back in the seat to shake off any  rust that may have gathered during his time of recuperation.

Two up and coming racers that gathered around the race car of Dan Santabarbara at the show were Kruez and Kamden Kiser, twin sons of sprint car racer, Mike Kiser.  The Kiser twins have already started a racing career, racing in the Cage Karts at Caroga Creek Kart 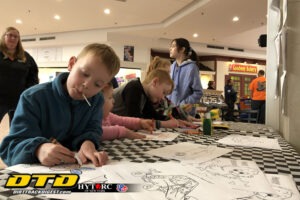 Track and no surprise, they are both winners.

Dodge City Speedway go-kart track was well represented at the show, with several karts on display and the Montenaro family close by with videos of kart races at the track from the 80s for a vintage touch and a table lined with kids trying their artistic abilities coloring pictures of race cars. 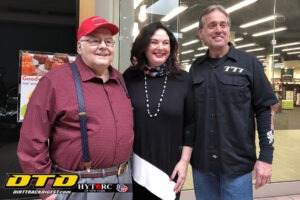 Northeast Stock Car Old Timers (NESCOT) was also on hand to remind those attending that local auto racing has been a staple in our area for many years and the pioneers are still around giving strong support for today’s racing and the local tracks.  NESCOT has fundraisers during the year to support the activities of the club, which include sponsoring events at local tracks throughout the racing season.  Their big event is the annual steak and chicken bake each year in August when they award members for their accomplishments in racing.   We shot is photo of NESCOT Treasurer, Rich Carpinello, MVVDMS, volunteer, Denise Markle and former sprint car racer, now retired, Jeff VanSteenburg. 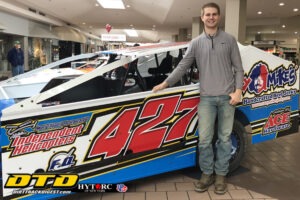 Fonda Speedway, Limited Sportsman 2021 champion, Carter Gibbons will move up to 602 Crate Sportsman this season and looks to continue moving forward in his racing efforts. Carter raced with the 602 Crate Sportsman a couple times at Fonda last season and said both times he went forward so that was encouraging.  He traveled to Oswego to run at Super Dirt Week last October and said he was discouraged with the conditions of the track and a couple encounters with officials.  He is looking forward to the 2022 season at Fonda.  His next step in racing will be in a sprint 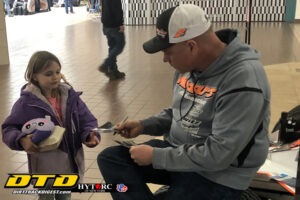 car he purchased from Link Pettit and racing with the CRSA Sprints in the future.

The 2RJ of 2021 Co-Champion Ronnie Johnson was a popular stop at the car show.  Here young Aubrey Kuhn of Richmondville waits for an autograph from R. J. 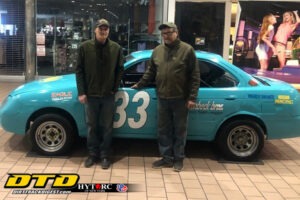 Also at the show for the first time was the Hollenbeck brothers, Kenny and Kerrie who both run Four Cylinders at Fonda.  Kenny was the 2021 Single Cam Champion and holds the win record in the division with 67 wins and eight titles, brother Kerrie has 21 wins and one title in Dual Cam. 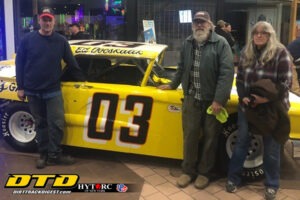 of Ed “Doc” Docskalik was the star of the show.  Doc said he found the vintage Thunderbird in a field in Davenport, NY and made an offer to the owner and when it was accepted the work began.  “Cliff Haslun deserves much of the credit for putting the car together, he was a lot of help,” Doc said.  They worked for months on the vintage project and the result is a thing of beauty waiting for the racing season to start and the first chance to get on the track.  In the photo is Cliff Haslun, Doc and Donna Merwin.  Look for Doc’s vintage Ford Thunderbird at Fonda when the MVVDMS makes their first visit on April 23rd. 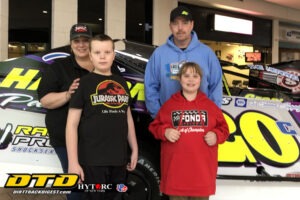 The Hanson family is an important part of Fonda Speedway racing, Angela is an official on race day and handles much of the office duties during the week; Craig gets more laps than most drivers, maintaining the track during the week and on race night if needed when he’s on break from racing his No. 20 Modified.  Cooper and Alayna are two strong supporters of dad when he races on Saturday nights.

This weekend we look forward to Albany-Saratoga who will try and open April 1, the earliest opening in the track history.  April 2 the STSS and Halmar Elite will race at Orange County Fair Speedway.