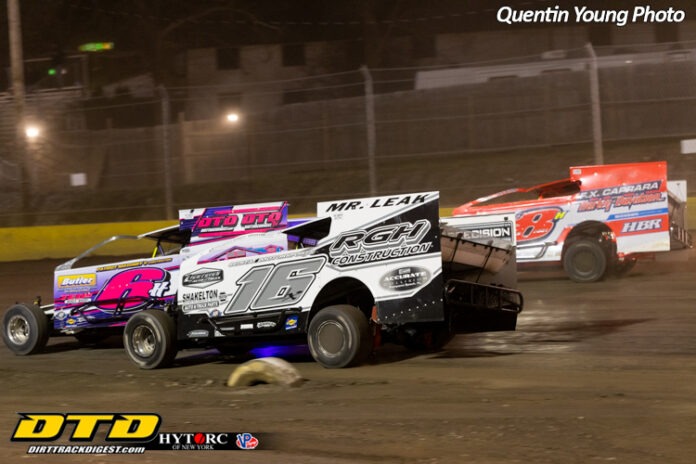 A strong field of 71 Modifieds jammed the historic Orange County Fair Speedway with dreams of taking home the $25,000 payday in race 2 of the STSS Halmar Elite Series of races.

Matt Sheppard of Waterloo, N.Y., took home over $25,000 for his win in the 50-lap affair in which he was never challenged for the lead. Sheppard use to never have any luck at winning races at Middletown. However that really came to an end last year when he cashed in for his first Eastern States 200 victory. Prior to that he had only one win and that was in a STSS event at Orange County.

ECS Auto Stores, the official supplier of parts to race teams at Middletown limited teams to just 2-tires for the night.

Recently Jeff Behrent, the owner of the Behrent’s 3 car that Mat Williamson piloted to a third place finish in the 50-lap affair had is Clements racing engine reworked after the Cherokee event.

“With the rules package in place and teams using the wide bore 440, we needed to make a change to keep up with the horsepower that the 440’s were putting out. We had a camshaft change and some other things to get more competitive,” said Behrent before the feature event.

Behrent also noted that the car that Williamson destroyed in qualifying for the Eastern States 200 was used as a training tool for the firemen and first responders at Orange County.

“The car- the frame and body was a write off but a lot of the components we were able to save but the car was donated for safety training,” said Jeff Behrent.

It’s not the British are coming but its a twin tier attack from central New York is coming. Larry Wight and Max McLaughlin both indicated they will be in attendance on a near weekly basis with big block’s to contend for the big season ending point title and the weekly big block payout.

McLaughlin on Friday raced in the NASCAR Wheelen Modified race at Richmond where he finished in the top 15, the last car on the lead lap.

“We didn’t pit late as we thought there was going to be another caution and it didn’t come and it ended up costing us.”

Stewart Friesen had terminal engine trouble during his heat race. A plume of smoke was visible from his car during his heat race. Upon returning to his pit box, his engine builder Billy Mathis of Performance Engines by Billy The Kid of Torrington, Conn., was on hand to help diagnose the issue. According to Mathis “There is oil on the spark plugs and it’s certainly piston related.”

Friesen was originally going to load up and go home, but parked right next to him was Ronnie Johnson. Johnson loaned Friesen one of his cars which had a big-block engine in it from Kevlar. Friesen started dead last in the feature in 31st and was able to wheel it home to a top 15 finish and he earned the Hard Charger award. Just before the feature rolled off, Johnson told Friesen to “go and race the car. Don’t just drive around with it”

Rolling in Style – One of the former haulers and motor coach from Gypsum Racing is now being occupied by Danny Creeden.

“I like the big truck and trailer but I do miss my pick up truck. I could wheel that around town and the best thing was that I could say, ‘hey you drive us home after the races.’ Now I do it all. I drive the hauler, race the car, and drive the hauler home,” Creeden said with a smile.

No more big trailer for Craig Mitchell. He sold his stacker over the winter.

“I don’t really miss it,” said Mitchell as he tried to sign autographs, do pre race prep and work on his new trailer. Mitchell is sporting new colors for his 93x in 2022.

“I tried to cast a line to get a sponsor with my boss and the logo of the company is similar to the paint scheme. The sponsor thing didn’t materialize so I had to keep the colors.”

Also, Mitchell is using a Clements racing engine for his STSS events. His big-block that he will pilot weekly at Orange County is an Enders. Clements also supplies the power for the Behrents owned 3 that Mat Williamson races on the STSS tour.

Making approximately his fifth start in the last year was Ryan Odasz. A former weekly campaigner at Fonda. Odasz is unsure what his weekly plans are.

“We liked Utica a lot but with fuel prices high we may stay closer to home like Albany Saratoga,” said Odasz.

Noted former crew chief for Rick Laubach, Frank Doaklan was a guest of Mike Gular’s race team for the night. He reports that after suffering a few bouts with COVID, he’s feeling good and it was so refreshing and rejuvenating to see many of the people he’s come to miss since being sick last year.

No passing? Mike Gular passed 14 cars and Stewart Friesen passed 17 cars. Both of which were in the consolation races. Hats off to Jeremie Corcoran and the staff for getting the track into race condition. The area on Friday received a deluge of rain and practice was canceled on Friday night to allow the track time to dry.

Mike Mahaney won his heat race, and was on the outside pole for the feature. He had a fast car early and gaped second place running Matt Sheppard early. The key word – early. Two laps into the 50-lap feature Mahaney’s night came an abrupt ending and in a precarious way too. Mahaney’s No. 35 shut off coming out of 4 and was right in the line of traffic. Thankfully no one hit Mahaney.

In a late night text exchange with Mahaney, he wrote that he thinks the crankshaft broke.

“I’m a little upset, but I have great equipment and a lot of other people have less than what I got. I will just put my head down and go back to work and try to right the ship there isn’t anything else I can do. The silver lining in it all is that the car showed real speed,” said Mahaney.

48 years and counting is how long Alan Johnson has been making circles at dirt tracks in the Northeast. Look for Alan to return to Utica on Friday nights and Canadaigua on Saturday nights. A top 10 finish for Alan on Saturday night was a team effort for sure after drawing the worst number in the draw for heat race lineups. AJ “Slideways” finished eighth in the 50-lap feature.

Peter Britten exited his heat early when his ignition box when south.  He started in the back of the consolation event and was unable to make up enough ground to qualify for the main-event with only two cars transferring.