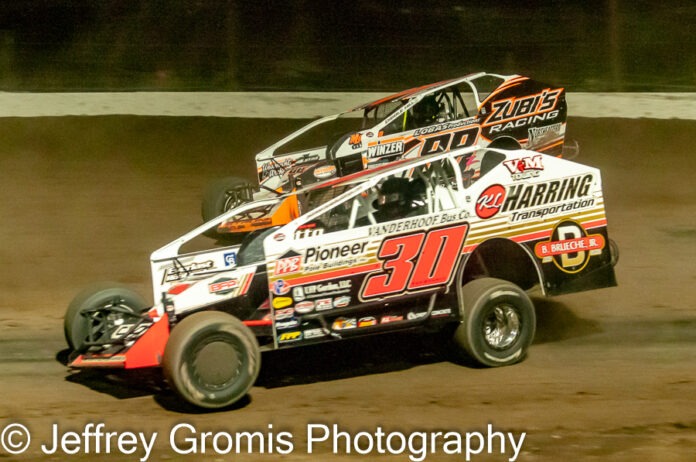 The racing season in 2022 could not be off to a better start for Craig Von Dohren. The No. 30 team won its first race at Georgetown Speedway a few weeks back and continued their winning ways with a win in Saturday night’s Bruce Rogers Memorial Money Maker 60 lap race at the Grandview Speedway. Von Dohren took home $10,060 for the big win.

“It feels really good to win this race,” said a happy Von Dohren from his trailer post-race. “Bruce was a great friend of mine, we had a lot of fun together on cruises and things he gave over the years. I am really glad I was able to win one for Bruce (Rogers). This win is huge.  The Rogers family have done so much for me over the years and not just me but for everyone and to win this race is special.”

Von Dohren started the feature event in sixth and quickly moved up into the top five and stayed there for first half of the race. Von Dohren and long-time rival Jeff Strunk had a very good battle going for third place as they swapped the spot multiple times.

A lap 38 restart proved to be what Von Dohren needed. Lining up in fourth, outside of Strunk, Von Dohren was able to get a good run and went by Strunk and then quickly made his was past second place running Doug Manmiller.

Von Dohren now had the No. 30 rolling and quickly ran down leader Timmy Buckwalter. The two veterans battled side-by-side for almost five laps before Von Dohren was able to work the inside groove past Buckwalter and take the lead.

“The track was hammer down early on and I was running third when I hit the hole going into turn one and Jeff (Strunk) was able to back by me,” explained Von Dohren. “The outside was the place to be on the restarts.  I was able to get back by him and we were okay at that point. Then the track slickened up a little bit and we got better. I was able to get to Timmy (Buckwalter) before he found the bottom.  It’s a bitch when you are leading like that, and I am pretty sure he didn’t know the bottom was getting better.  If he moves down and someone goes around him, he looks like an idiot. When you are leading like Timmy was you have to stay where you are running at and that is tough.

“Look, this place is tough. It’s been tough forever and it is not getting any easier, especially with these cars. Everybody here has good stuff; everyone is fast and aggressive which is how you have to race here and that’s just the way it is right now.”

Grandview has been home to Von Dohren for most, if not all of his career, and winning this special race meant a lot for the driver out of Oley, Pa., who is the career win leader at Grandview. Von Dohren came close to winning this race in 2021 and to win it this year was a great way to get the 60th season of racing at Grandview going.

“We were really good in this race last year,” cited Von Dohren. I think we started 23rd, got up to second and were right next to Duane when the yellow came out and ended up finishing second.  It was good for us to finally win this one. Like I said earlier, Bruce was a great friend and we have had a lot fun together over the years.”

It has been a struggle for Von Dohren as well as many others over the winter to get everything together to prepare for the 2022 season, especially in the motor department. When Von Dohren won the Georgetown spec 358 race a few weeks ago that was team’s only available motor at the time and that motor was from last season leaving the team wondering if their new or refreshed motors would be done in time to start the season. Fortunately for the team, both motors were able to be picked up two weeks ago and the motor for the Dave Dissinger No. 88X team that Von Dohren races at Big Diamond was done last week leaving only the No. 30 teams big-block still waiting to be prepared.

“It’s going to be tough for everyone this year,” said Von Dohren. “It doesn’t matter if you have the money or not, if you cannot get parts for these motors they can’t be fixed. It’s like baking a cake, if you don’t have all the ingredients, it can’t be done and it is going to be a struggle for any team over this year. Last year you couldn’t get spark plugs, this year it’s pistons and push rods. It will be an interesting summer for sure and I know a couple of guys had motor problems tonight so that is not a good start to the year.”