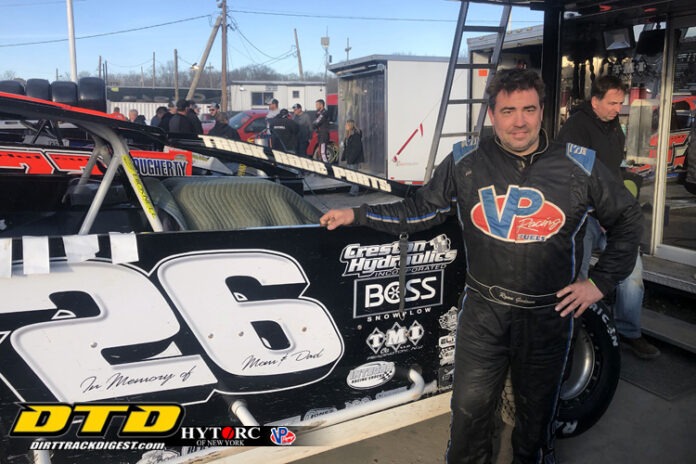 Both ends of this past weekend, Friday and Sunday, felt like winter and then on Saturday the sun came out and racers and fans were treated to a beautiful 50 degree day at Orange County Fair Speedway.  Albany-Saratoga Speedway was hit with bad weather on Friday, ruining their effort to start the season on the earliest date in the history of the track.  It turned out to be a bad April Fool’s Day.  On Sunday, Bridgeport Speedway in New Jersey had to bit the bullet and cancel Sunday’s portion of their two-day show, due to lousy weather conditions.

We love getting to Orange County early in the season before our local racing starts.

As I sat on Route 211 waiting to turn into the road leading to the fairgrounds, I realized the traffic going to the speedway was heavy and after a 45 minute delay we got into the track and found some 71 Modifieds and 51 Crate 602 Sportsman in the massive pit area.  With seven Modified heats and five Sportsman heats the fans were treated to some great racing on the track prepared by Jeremie Corcoran. 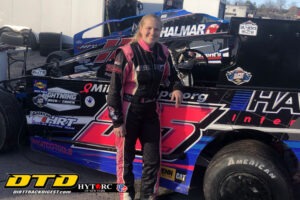 Walking through the pit area we stopped first in the Allison Ricci area and spoke with her about her plans for the season.  She said she will concentrate on Orange County and travel to Fonda when she can, plus a few other races.  On Saturday she did not qualify along with 39 other competitors.

As a race fan we love to see the pits full with race cars, not thinking that by the luck of the draw you could be headed home on this day.  That’s what happened to 40 drivers.  When they are taking three cars out of a 10-car heat, it takes more than luck and prayers. 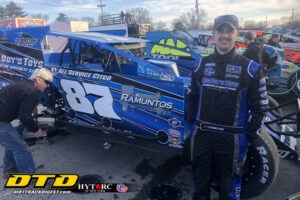 eil Stratton and his Big Boyz Toys sponsored mount.  Neil said he was there for the challenge no matter how many cars were in competition.  Neil was another bitten by a bad draw that put him in the back of his heat.  This season Neil plans to be at Albany-Saratoga, except for times when things come up with the family.

Our next stop was to talk with Ryan Godown.  We had never spoken with Ryan and wanted to speak with him about his victory in the Halmar International Elite Series at Cherokee Speedway in South Carolina.  He is still smiling about the $25,000 payday along with his second win for the 2022 season at Georgetown Speedway in Delaware.

Ryan has been in the sport for 25 years, his first win came in a Street Stock at East Windsor Speedway in New Jersey.  During his career he has won in Late Models, Sportsman, Modifieds, and Sprints.  Being in the sport that long and in that many divisions, you certainly build a base of fans and he also has those Godown non-fans, it’s just the nature of the sport and many times it’s the winners that get most of the boos.  When we spoke with Ryan Odasz, he said he remembered racing with Godown at Syracuse in a Sportsman and realized then how good a driver he was, that he was a natural.

A familiar mount in the pits on Saturday was the No. 14R of Ryan Odasz.  Ryan is making a return to the sport in big way this season and originally had plans to be at Albany-Saratoga on Friday before the bad weather.  He came to Orange County to get seat time and shake down the car and himself after his 10-year absence from racing on a regular basis.  He says Orange County is not the same track he remembers, a single lane on the bottom and you ran extra hard tires.  Now he says, it’s three lanes wide and very little tire wear. 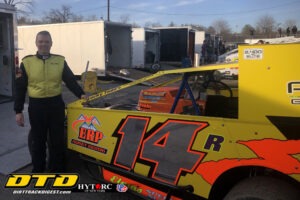 Ryan’s full-time deal for 2022 involves the No. 24 owned by Bill Scoons that he will run weekly at Fonda.  Ryan has done well in the past at Fonda and has 11 wins to his credit in Modifieds and seven Sportsman wins.  Ryan says, “I don’t like odd numbers” and is eager to get back to Fonda to add to his win total.  The team currently has on order and waiting for one of the “Weekend Warrior” Wegner engines.  Ryan said he was told to it sometime this week.

Ryan last raced at Fonda in the No. 14R owned by Wayne Podbielski who passed away suddenly in 2019.  Ryan said Wayne was a great skier and loved the slopes in the winter months.  One of the last times he and Wayne went skiing they talked about putting a car together and going back to Fonda to add to his win total and that was the catalyst that lite the fire for his return.

Ryan also has been putting together his own No. 14R that is Deyo legal and he would like to run that to Utica-Rome.  He also still has his older No. 88 with a 20-year-old big block Jack Tant engine that he plans to race at Albany-Saratoga when he can.

Heads up on Jessica Friesen racing; Jessica will return to drive the Halmar Friesen Racing No. 62 NASCAR truck series Toyota on April 16th at Bristol Raceway on the dirt and at Knoxville Raceway on June 18th.  Sponsors for Jessica are Halmar International, CorPak Merchandising, A. Colarusso & Son, FX Caprara Car Companies, Bill Lake Modular Homes and Parks Companies.  April is also a special month for the team, World Autism month; they’ve created AIM AUTISM and over the past three years  have donated over $300,000 to local schools and organizations.

Albany-Saratoga has a practice session scheduled for Friday, April 8 from 6:00-9:00pm with a Sunday rain date also.