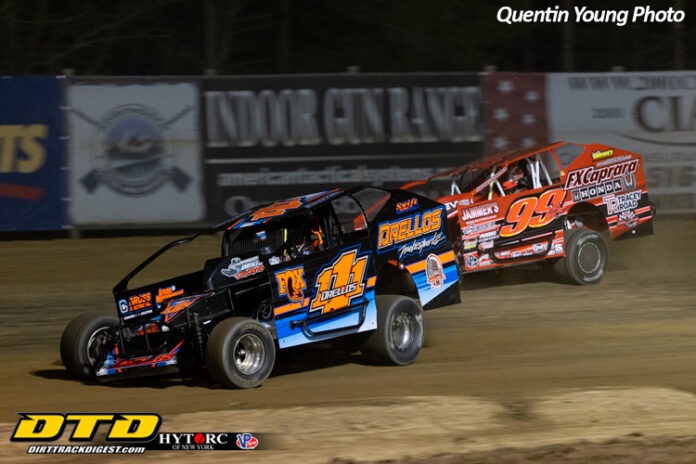 Over 170 race cars participated in the 57th opening day events at the Albany Saratoga Speedway. The track tried to host its earliest season opener on April 1, but the weather didn’t cooperate until this week.

Many teams were seen wearing bracelets being sold with the word “Lyle Strong.” Lyle Devore the track promoter has been battling cancer and all of the money raised with the sale of the $5 bracelets were to go directly to Lyle to offset medical costs.

The 2022 season marks the 10th year that Lyle Devore and Howie Commander have been at the helm of the famed dirt oval on route 9 in Malta. Cars were parked down route 9 and the main parking lot was full by the end of the night. A rousing successful night of racing that was pushed right along due to a stiff wind and cool temps. There was no intermission taken.

Anthony Perrego was in attendance with the Vinnie Salerno owned Teo. Perrego isn’t going to be a contender at Malta in 2022. He will focus his attention on the Super DIRTcar Series tour with Vinnie’s car and running for Brian Smith at Orange County in both big block and 358 action weekly. Perrego is still waiting on some engines to get back to Smith for the season opener which has now been rained out 2 weeks in a row at Orange County.

Also waiting on engines to come back from his engine builder, Billy the Kid, is Queensbury, N.Y., Modified runner Demetrios Drellos. Drellos will be calling Fonda home in 2022 and Malta.

“We are going to hit the first few Super DIRTcar Series races see how are performance is and see if the team is having fun. I’m really looking forward to getting back to Bridgeport in a few weeks as that place is really racy. Your up on the wheel and the slide jobs are fun. It’s an exciting place to run. I’m also psyched to get to race Fonda. We are waiting on an engine for there that we bought in November around Thanksgiving time. I’m told its a shortage of valves or the valve maker has had a run of bad valves. All we can do is wait it out,” said Drellos.

Matt Sheppard was making a rare stop at Albany-Saratoga. He changed a carburetor early in the evening after hot laps. He put on a small carb. Sheppard wouldn’t qualify in his heat race but made in via a consi race and finished inside the top 10. Sheppard was suppose to race the following day at Orange County but the team elected not to go due to a near certainty of rain. Orange County was eventually rained out early in the day on Saturday.

Get Well wishes go out to Shelly Johnson. The wife of Ronnie Johnson. On Friday she underwent a multi hour surgery on her back and was just out of surgery as the cars were getting ready for hot laps.

Keith Flach was supposed to be on hand for opening day with a new crew chief Connor Marvin. However Flach was still dealing with a bout of Covid-19 in his home and said that he would be starting his season next week

Recently Billy Decker was nominated to be inducted into the Hall of Fame in Weedsport, N.Y., later this summer. Decker was asked how he felt about it.

“Well, its a little early to have a lot of thoughts about it since it just went down. However, I am most thankful that for the early portion of my career my dad got to see me run and I’m just thankful for everything that I ever accomplished. Its a real honor to be inducted but I want to make it clear, I’m not out to pasture yet. I still have a lot left in the tank. I don’t want anyone sleeping on me,” said Decker with a grin.

Look for Decker to campaign nearly weekly at Utica-Rome on Friday’s and some hit or miss events on the Super DIRTcar Series.

According to Mike Romano of Andy’s Speed Center, Hoosier tires are in severe shortage and things are only getting worse and it’s only early April.

“I will put in an order with Hoosier and lets say I want to order 500 tires. I’m lucky if I get 250 and that order is 3-4 weeks out. I never in the 25 years of tire sales have ever seen anything like this. I use to have a nearly full trailer of tires and I would be happy to sell every tire I had because I knew I could get more. Now, things are so tight that no one has inventory. Promoters need to implement something to help ease the strain. Maybe don’t allow any grinding or siping of tires or maybe use a harder compound tire.

“I had Sheppard, Fuller and Maresca reach out to me this week. They all wanted the 500 compound tire. It’s a tire that we hardly sell anymore and I thought it was a joke but they actually want that tire because they fear that when they need it later this year they wont be able to get it. No one is immune from the shortage. Pro Stock, Sportsman, Modified teams all need tires. What is going to happen when all of the northeast is open and running three to four nights a week. Where will the tires come from? I think there is going to be some weeks that races may get canceled because of a lack of tires. You already had a sprint car tour get canceled because of no tires.”

Romano also added that, “American Racer is short on tires too. I’m told they had no tires produced in the last several days because of a shortage of raw material.”

While tires were in short supply, there was and is no shortage of VP Race Fuel. The fuel trailer was stuffed with drums for purchase with a price sheet readily available to anyone who wanted it.

Elmo Reckner was on hand as a spectator and said he plans on running a crate sportsman at Devils Bowl this year if he feels up to it. Last year Reckner suffered several concussions and has had some small complications still from them.

“If I go up there and I don’t feel right then I will hang up the helmet. I have had a great career racing and did it for fun. I don’t want to be in anyone’s way or be a hindrance if I’m not feeling 100%.”

Reckner was suppose to go on a 16 day cruise leaving this Sunday and returning in time for the season opener at Devils Bowl.

Also not devoting a full season to racing at Malta was runner up Matt DeLorenzo. The 49 year old Cropseyville, N.Y., driver said, “My daughters are on a traveling varsity sports team and I would like to watch them. I’ve been racing for over 20-years now and its just my brother and my dad in the shop and I would like to see my kids grow up and if I have to miss a few races because of it that’s ok with me.”

DeLorenzo said that his car “stumbled” on nearly every restart during the feature. All-in-all though he was happy with the second place finish.