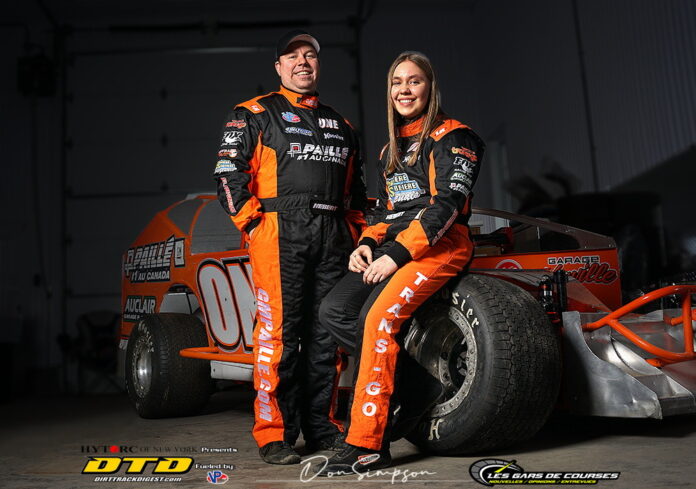 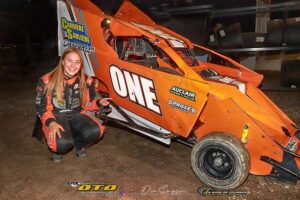 The second step in Daphne Hebert’s evolution in racing will be a reality this coming season, after a successful year racing in the Slingshot class, Daphne will follow in her dad’s footsteps as she moves up to the Sportsman Modified division.

Daphne has been going to the race track since she was a newborn, following her father, David, as he was racing. Daphne has witnessed firsthand how racing evolves and how drivers advance in class as their driving talent improves. 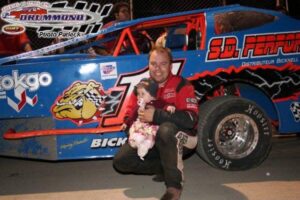 While the winter months passed, Daphne talked with her dad about how the season will be in 2022. As soon as those discussions began, it was clear to both Daphne and David that she would move up to the Sportsman division for the next season.

Daphne stated, “We decided to move up into the Sportsman class because last season in 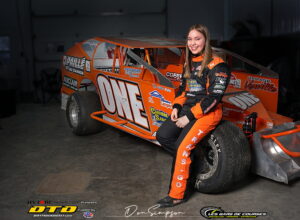 Slingshot went very well, despite several mechanical breakdowns. But it was also because we wanted to start a new experience and increase the degree of difficulty.”

This move will be a transition period to learn how to control a Sportsman Modified, especially in traffic. Meanwhile, Daphne will still race in the Slingshot class throughout the season. Daphne is looking to improve her results at both Granby and Drummond where mechanical issues played a big role in the challenge for the championship. In contrast, her result at St-Guillaume Speedway was much better, as she won her first track title. 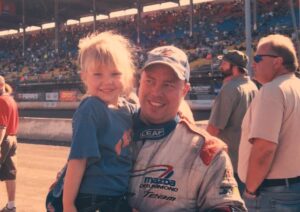 But what is the driving force behind Daphne’s move into racing in the first place?

She said, “I think I was influenced mainly by my father, but also by the fact of watching all the drivers race and what came after a race. The passion, the fun they all had on their faces. In addition, I was born in the motorized world, so I spent all my summers there. It’s part of me.” 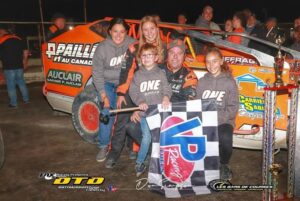 The upcoming weeks will be filled with plenty of practice time behind the wheel for Daphne along with her dad’s guidance. Daphne intends to test at the Cornwall Motor Speedway, as well as Autodrome Drummond and Le RPM to familiarize herself with each circuit.

Among Daphne’s plans for this season is to compete at the Cornwall Motor Speedway, Autodrome Drummond, and Le RPM Speedway within the Sportsman Modified division in select events. 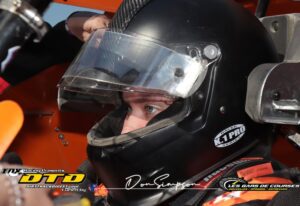 As the season unfolds, David and Daphne will evaluate how well the regular season is going before deciding whether to carry on and participate in some of the fall racing events.

As David expressed, “It would be nice if we can continue Daphne’s racing program, the more time behind the wheel, the more Daphne will learn about racing in this high-level sport.”

This will be a new chapter for Daphne, but even more so for David, as he will be helping guide his daughter along the path he once traveled. 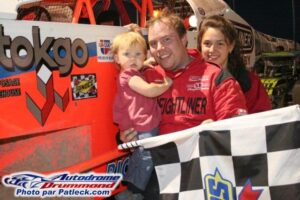 “For the long term, I would like to see Daphne race in the Sportsman division for a minimum of four-five years so she is comfortable running in the fast lane,” mentioned David.  “From this point, she will run the Sportsman Series or even step up into the Modified division. This would be the ultimate dream for me. But even bigger would be to see Daphne drive for Team ONE. As the team’s driver and shared owner, nothing could be better than to see my daughter take over the reins behind the wheel of the ONE car as I step aside from driving. A nice way to retire and relax in life knowing Daphne is carrying on my legacy.”

It will be an exciting year for the 17-year-old driver as she follows her dreams of racing, a dream she has had since childhood. Now, it will become a reality.

Daphne commented, “Personally, I dream of racing against my father one day. It’s a bit like my childhood dream to beat the ‘Saint-Damase technician.’ If I look at the long turn goal, it is sure that one day I would like to perform in the Modified class with the best driver!”