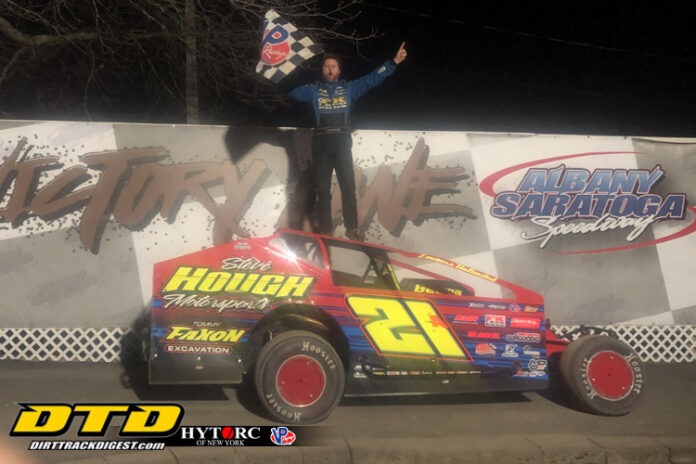 The “Great Race Place” certainly lived up to its name on Friday night for the 57th opening night at the Malta oval.  Albany-Saratoga being the first local track to have racing for the 2022 season many competitors were eager to get on the track.  Over 40 Modifieds piloted by some of the very best racers in the Northeast filled the pits giving the fans some great racing in the 40-lap main event paying $6500 to win.  Of the drivers in the field of 43 Mods there was a total of 77 wins in 2021 alone.

In the past few years the popular venue has been brought back to life by p romoter, Lyle Devore and Marcy and Mia Mangino and Friday night was one they could be proud of with 179 competitors in the pits eager to put on a show for the fans that filled the stands. 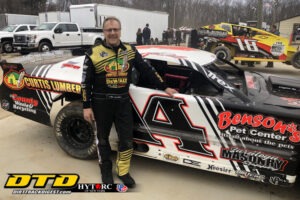 On our stroll through the pits one of the first cars we spotted was one of a true veterans of our sport, driver of the Curtis Lumber Pro Stock No. 14, Kim Duell.  We shared with him that 45 years ago we sat in the stands as fans and remember Kim Duell competing. Yes, he’s been around for a long time and is an ambassador for both Albany-Saratoga and our sport in general.

Over his career spanning 45 years, Kim has tried his hand in other divisions but with the cost of racing he is happy to be in a Pro Stock.  He drives a chassis of his own creation and has just completed one for Brandon Emigh.  When he retires from his day job at Curtis Lumber he plans to build pro stock chassis’s.

When Friday morning comes for Kim, he is already looking forward to the evening and racing at Malta.  Our sport could use more like Kim Duell.

On a walk through the fan side we spotted a young may getting his photo taken by another fan so we stopped to take this shot.  The young man, Damian Ward of Ballston Spa was about to race in his first ever Street Stock event at the track.  In the photo is, Bobby Jones and Brayden Ward, his cousin and brother. 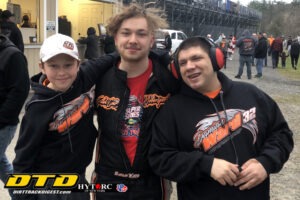 In talking with Damian we learned his racing experience had come from racing go-karts  in the Adirondack Karting Association (AKA) from 2010-2015 before stepping into the Four Cylinder division in 2019 at Malta.  This season he decided to move up to Street Stocks.  When the heats were posted Damian was scheduled to start third in a 12-car heat but he decided he didn’t want to mess anyone else up, so he chose to start in the rear.  He came across the line in fifth place and earned our respect for his respect of his fellow racers.  In the main event for the Street Stocks he was scheduled to start in ninth position but, once again decided to start in the rear in the 20-car field.  He had moved up to 16th when an overheating problem concerned him and he pulled the car to the infield.  Many of Damian’s decisions on his first night in the division, gave us reason to believe he has a future in our sport.  He also has many supporters in his corner in the form of sponsors on his No. 32 Street Stock; Tree Top Techs, J&S Asphalt, DAB Towing and Recovery, Juicy Burgers, Ballston Spa Carpet and Tile, Holiday Homes by Ray Jones, MJP Photos, BNC Construction, Ballston Spa Sunoco and Elmos Speed and Supply.

Walking by the chair rental trailer, we spotted Modified driver, Olden Dwyer, son of former driver, Ron Dwyer, who is normally at the track manning the chair rental concession that he owns.  Olden was a regular on the Super DIRTcar Series last season as one of the 17 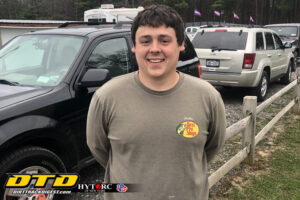 Platinum drivers that signed the contract to follow the series for the 2021 season.  He said following the series and only making seven of the 30 events he was unable to get the valuable seat time he had hoped for and said he decided not to sign this year but will compete in some of the series events that are closer to home.  His racing this season will consist of Lebanon Valley weekly and Albany-Saratoga when his busy off track schedule allows.

The driver that looked to have everything going his way for the first half of the 40-lap Modified main event was Matt DeLorenzo who lost the lead to Australian, Peter Britten  on a restart after a lap 19 caution.  Peter who was Albany-Saratoga Modified Track Champion in 2017 was happy to be back in victory lane at the “Great Race Place”.   He has a total of 13 wins at the track.  Since 2012 he has found victory lane 26 times at various speedways in the US.  Half of his wins have been at Malta.

We spoke with Matt DeLorenzo after the feature and he said he thought he could retake the lead from Peter, but he just didn’t have enough for the high flying No. 21A.  Matt says he is not sure about his season, he may not be racing Saturdays and may miss a few Fridays due to family obligations. 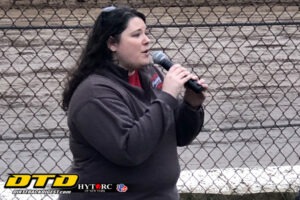 The National Anthem was performed by Becky Sweet who can always be counted on to do an amazing job in singing the Star-Bangled Banner.  She has been part of opening ceremonies at local tracks for the past 21 years.   Becky is also a part of the Kenny Tremont race team.

Thanks to FloRacing we saw Billy Pauch, Sr., record his 744th career win in the opening race at Bridgeport Speedway on Saturday, April 9 over his son, Billy, Jr.  The following week we received news that a long-awaited biography of his life is set to be released at a book launch on Sunday, May 15, from 1-4 pm at Pauch’s race shop in Frenchtown, NJ.  The book, “The Last Cowboy” written by, award winning writer, Buffy Swanson encompasses Billy’s entire career from his debut in the mid 70’s to current day and he’s still winning.  The day after the launch the book will be available on buffyswanson.myshopify.com.  This week we heard, from a very reliable source, that Billy Pauch, Sr., is retiring.

Until next time please send all news and/or comments to biittig@yahoo.com‘