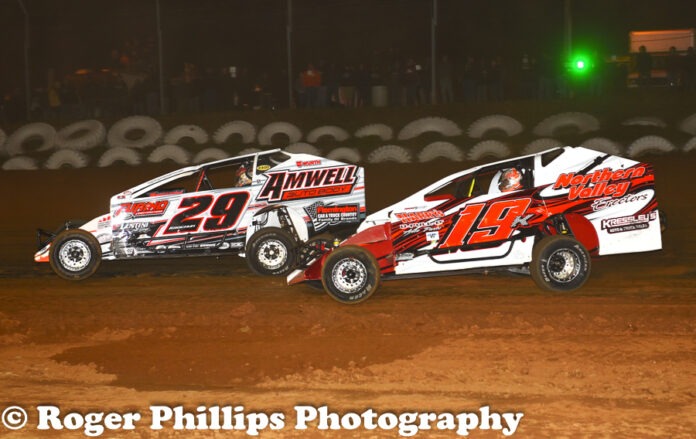 Friday night has been a long time coming for Ryan Krachun. The Neshanic Station, N.J., racer has been on the cusp of wins before at Big Diamond but has never been able to close the deal and get a win.

Krachun left no doubt on Friday night that he was not going to be denied as he held his line and drove mistake free while holding off Brett Kressley and a late charging Alex Yankowski to take the big $12,000 to win Money in the Mountains race.

“We finally did it,” said a very happy Krachun celebrating his win with his family back at the team’s hauler. “That victory lane has been very elusive.  I have been coming here for most of four years now and last year we were way closer to winning than we’ve ever been multiple times and just couldn’t get it done. I think I took the white flag as the leader four times last year and couldn’t get it done. I think it was all in a plan because this is the one you want to get your first win at.”

Krachun took the green flag to start the race in the third spot. When front row starters Doug Manmiller and Richie Pratt Jr., drifted a little high at the start through turns one and two, Krachun pounced on the opening down low to take over the top spot. On the next restart Pratt challenged Krachun on the outside but Krachun prevailed and kept the lead.

“That came from my experience here,” cited Krachun. “On the restarts here everybody bunches up and goes into the first corner really hard so I tried to back up my corner and let those two guys battle it out and the hit a hole I believe and it shot them both up the track. I tried to stay on the bottom and it worked out to my favor.  I’ll take it.”

Once in front, Krachun went on to dominate the race holding off a determined Brett Kressley late in the race and a last lap challenge from Alex Yankowski to take the big win.

“My plan before the race was not come off the bottom and I just tried to keep that drilled in my head,” explained Krachun. “I also told myself to not hit the yuke tires and guess what, I hit the yuke tire and for some reason it didn’t do anything to the car and I was very lucky there.  That could’ve ended our night on lap five I think it was when I hit it. I knew I had to stick to the bottom because there wasn’t much passing in the heats, and I thought the feature was going to be the same way.

“So, I wanted to make my move early, get up there as quick as I can, hold my line and make them go around me. Brett (Kressley) gave me shot in the bumper there late but not enough to do anything and we were racing for $12,000 so I knew it was going to be easy. I knew he couldn’t get by me on the outside so he had to try something I guess.”

As we all know, the Krachun family has been through a lot since last summer when the remnants of a hurricane came through and flooded out their house and race shop. To this day, work on getting their house back in shape continues so winning a big race like this definitely helps to bring a smile to the faces of the Krachun family.

“Yes, a win like this goes a long way to help with our spirits and confidence,” mentioned Krachun. “We have been chasing big check wins like this for a while and just haven’t been able to win one. We have got a few wins here and there with the weekly stuff, but we have always been looking for what everyone calls a ‘Big Check’ win when everyone of the big boys comes to town. Tonight’s win was special, you had the best of the best here tonight with Godown, Perrego and some New York guys plus you have the Big Diamond regulars like Jeff (Strunk), Duane (Howard) and Craig (Von Dohren) plus (Mike) Gular and others. I look up to those guys, they have a lot of experience it is cool to race with them and watch what they do.

Alex Yankowski, who will not be a regular at Big Diamond Speedway this season, has enjoyed early success so far in 2022 at Big Diamond with a third on opening night and a second place finish this past Friday night in the Rich Stankewicz No. 2rs.

“With how hard it was to pass tonight, we are pretty happy to be able to come from starting sixth to finishing second,” said Yankowski after the race. “I think we had a really good car, very proud of the Rich Stankewicz team. We have been really busting our butts to get this car going good. We made a little tune up on the Bilstein Shocks from last Friday and it definitely made a big difference tonight. We have all been working hard, myself, Kevin (Bates), Bruce and Rich (Stankewicz) have put a lot into this car. Everything is coming together very well right now, it the track was a little different I think we could’ve won, but congratulations to the No. 29 team, they definitely deserve to get the win. We are happy with how the last two week here at Big Diamond have gone and are very excited to get to Utica-Rome next week for the Alex Friesen race.”

Starting on Tuesday, May 3, Yankowski will be making his debut as a touring regular on the Super DIRTcar series when the hopefully get the season going after two postponements with a race at Yankowski’s Saturday night home track for the past two season Bridgeport Motorsports Park. The young teenage driver is looking forward to stepping out of his comfort zone and get the series started.

“We are pretty stoked to get going on the DIRT tour and to end up having the first race at Bridgeport is really exciting,” mentioned Yankowski. “We have a super good team and I have to thank my dad for having the faith in me to be able to do something like run the SDS. We have super good group of guys, and we all do our jobs and when we are on it we are on it. Bridgeport is our home turf, and it will help that I well feel comfortable there. Then again, it will definitely be different running a big block there plus on the Hoosier tires which is really a double whammy when you think about it but I like racing a big block and I think big block racing is better than spec head racing all day long and I think most drivers will agree with me on that. Myself and (Billy) Pauch Sr talk about that all the time but it is what it is.”

Opening night at Big Diamond Speedway did not go as planned for Brandon Edgar in the Crate 602 Sportsman feature. Edgar was eliminated early in the race when the front of his No. 57 Crate was wiped out.

Edgar made up for it in a big way this past Friday when he took the lead early and went on to dominate the 20 lap feature to pick up the big $1,000 win. It was just what the doctor ordered after opening night.

“This is definitely better than last week, that’s for sure,” said a happy Edgar while his car was going through post-race tech. “Last week we had almost the entire left front of the car torn off and it was a big expense for us to get it fixed, especially to start the year. I think we spent more money on last weeks wreck than we spent all of last year here. I knew we would have a decent starting spot this week with the handicap, so we needed to capitalize on starting near the front.”

Last season Edgar raced in the Open Sportsman here at Big Diamond but with that division no longer racing here, Edgar had to make a decision to either race somewhere else or install a crate motor into their car. The team did throw a crate motor in for a race here last season and won so they decided to go in that direction for 2022.

“It seems like everywhere is going with the crates, so we went with that,” explained Edgar. “The crates obviously have a little less power, and it seems, and it seems racing with a crate is more momentum based. If you screw up with a crate motor, it shows up much quicker, I think. But if you can string some laps together, I think you can pull away a little quicker. So, I just tried to hit my marks and not make any mistakes, tonight’s type of track is what Tyler (Peet) is good on so I was happy we could get ahead of him early and keep him behind us.”

Former Big Diamond Modified track champion is off to a horrible start in 2022 at Big Diamond. Opening night found Laubach not in attendance due to lack of a motor. Last Friday Laubach again was faced with motor troubles resulting in an DNQ…

Max McLaughlin was in attendance on Friday night wheeling the Norm Hansell owned No. 357. McLaughlin qualified easily through his heat and unfortunately was involved in a big wreck on the front stretch early in the feature which resulted in his car perched on the top of Nate Brinker’s No. 14 suffering heavy damage…

Invader Richie Pratt Jr in the Dan Sommeling No. 51 ran in the top five most of the feature race ultimately finishing in the sixth spot…

Anthony Perrego made a return to Big Diamond racing the Vinny Salerno No. 4*. Perrego qualified through the consi and finished 14th in the feature event. Perrego and Billy Pauch Jr were co-winners of The Four-Wide Salute Podcast hard charger awards…

This Friday, April 29 at Big Diamond Speedway will find the Insigner Performance modifieds racing for $3,500 to win. Also on the schedule for this Friday will be the USS Achey Crate 602 Sportsman, the Red White and Blue Roadrunners along with the season debut of the 600 XCEL modifieds…