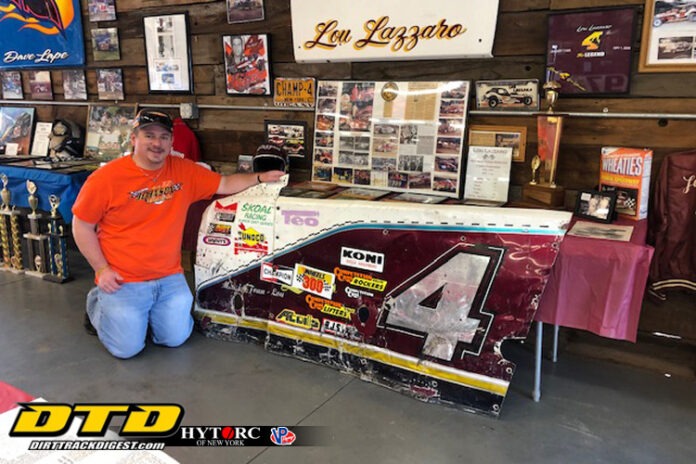 Week two at Albany-Saratoga saw 166 competitors fill the pits, including several invaders.  One of the invaders, Larry Wight made the trip because Brewerton will not open until May 6.  Larry said his plans this season will be Brewerton on Friday and when he can will be at Land of Legends on Saturday and he will also make some of the DIRTcar series shows and the Elite shows when his schedule allows. 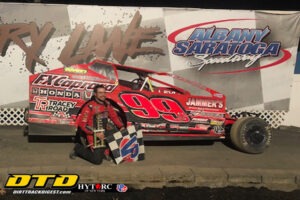 Going into Friday, Larry’s success at Malta shows a victory on April 17, 2015, so he was familiar with the early season conditions at the tracks and the staunch competition that the facility draws each week.

Larry said he has not signed on to be a platinum driver on the DIRTcar Series this season because his schedule limits the time he can commit to being away during the week.

Wight’s thoughts are already on Oswego and the 50th running of Super Dirt Week in October.  He said he recently purchased a new bull dozer to help put down the clay surface and he has a GPS to measure how thick the surface will be.

Before the night was over, Larry was standing in victory lane at the “Great Race Place” to record his 98th career win and his second at Malta.  He started the feature in 15th position and charged to the front taking the lead from Keith Flach on lap 26 and continued on to victory. 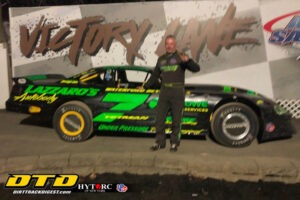 We also stopped at the pit area of Pro Stock veteran, Rob Yetman who was still smiling from his victory the week before that tied him for the top spot on the all time win list with “Hollywood” Joe Santoro with 26 wins in Pro Stocks at Malta.  On Friday he proceeded to be the fastest in the division and recorded his 27th win putting him on top of the win list.  Rob was track champion at A-S in 2013 and 2014.

He is looking forward to returning to Oswego to claim one more victory during Super Dirt Week 50.  He was the SDW Pro Stock winner five years in a row, 2013-2017. 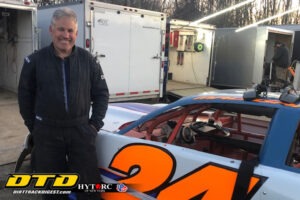 In the Sportsman ranks with 44 cars on hand the third generation driver, Scott Duell was the winner of the Sportsman Shootout Series and $1500.  Scott is familiar with victory lane at Malta, he has eleven in wins Sportsman and seven in Pro Stocks.

We ran into Dan Madigan who is currently driving in the Street Stock division, the No. 24.  He says he enjoys the class, there is no stress, just a good time.  Dan was a former Pro Stock competitor at the track and has nine wins in the division.  On Friday he drove his Street Stock to the runner up position. 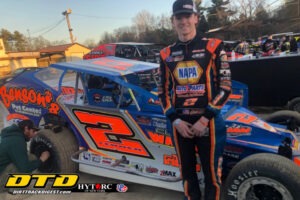 We stopped and saw Jack Lehner who was looking at his second start of the season at Malta. Jack has already been on the road, racing in the southern states.  He said his 2022 season will be similar to last season, he will driving his own car at Malta, and on the Super DIRTcar Series, he re-signed as a platinum driver, some STSS shows and the Nelson owned No. 85 at Fonda.  Jack recorded his first Modified wins, one each, in both cars, last year at both tracks.

Fonda finally got a good weather day for racing but had to wait till Sunday after a forecast of showers for Saturday night in the Mohawk Valley forced management to postpone the Montgomery County Open, Jack Johnson Memorial.  It turned out to be a good move because many of the drivers that race at their home tracks on Saturday were able to participate, 43 Modifieds and a total 128 cars in the pits.

Stewart Friesen beckoned his usual good luck for the draw and wound up on the pole of his heat and the main event.  Now we know where all of Brett Hearn’s luck went after he retired.  Stewart was able to stay on the front despite the many challenges of some of the other stars in the field.  Friesen picked up $12,000 for his efforts and said it was very special to win an event in memory of Jack Johnson because “this was his house” said Friesen.

We arrived early enough to roam the pits but not before a visit to the Fonda Speedway Museum where we found the familiar face of Doug Zupan.  Doug had just delivered a door panel from a famous Lou Lazzaro car that he has had in his basement for the past 20 years.  The door was given to him by former driver, John Ramsey when he was working at Utica-Rome doing PR work.  John had rescued it from a junk yard and knew that Doug was a big fan of Lazzaro and would be the one that would preserve the piece of racing history.  Doug remembers that he had read an article in Stock Car Magazine that included a picture of the Olsen car, with the panel.  Also visible are the  many patches and repairs done to the door and the work that went into the cars in those days.

As time went by and the Fonda Speedway Museum became a place for racing history to be displayed and preserved Doug said he knew that’s where the Lazzaro No. 4 door belonged, not in his basement, so on Sunday there it was proudly sitting in the Lazzaro display area of the museum, thanks to Doug and curators of the museum, Peter and Jessica Lape-Schwab who do a tremendous job of preserving the history of the “Track of Champions” through their work at the Fonda Speedway Museum. 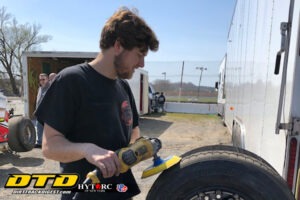 The Drellos No. 111 is back home at Fonda this season and according to the driver, Demetrios the plans are to race at Fonda weekly on Saturdays and at Albany-Saratoga on Friday.   Demetrios is another of the young dirt stars that did not sign with the DIRTcar series as a platinum driver this season.

“I’m not signing up for anything this season,” said Demetrios, “I’m just going to do what I want when my 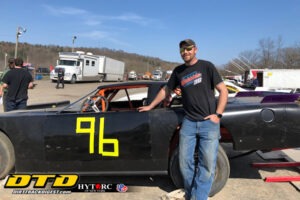 With the difficulty of getting tires and parts, many of the drivers feel the same way.

Pro Stock driver, Andy Graves was at Fonda on Sunday and says not only is it going to be difficult to get parts and tires, he is waiting for his car to get the finishing touches of the vinyl wrap.  He used fluorescent tape to number his car for Sunday’s event.  Four Cylinder driver, John Napoli was in Graves’ pit when we were there and says he also has concerns about the supply chain. 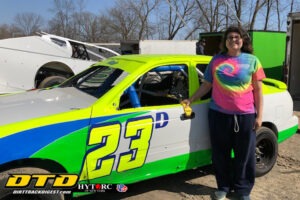 Next on our trip through the Fonda pit area, we ran into Four Cylinder driver, Gina Voris who was showing off her newly painted, brightly colored ride.  Gina had been at the track for practice before but Sunday was her debut in an event and she did very well with a fifth place finish.  Gina works full-time at a “doggie daycare” during the week.  Now that sounds like fun.

During the drivers meeting Brett Deyo listed the improvements to Fonda Speedway over the off season thanks to the Fonda Fair Board; brand new fence, renovation of the first turn tower and the Fair Board tower and new poles for the new lights to be installed this season.  Deyo also introduced his newest, full-time employee, Jamie Page who has served part-time as Track Manager since Deyo took over at Fonda.    Jamie recently retired from his auto parts salesman position and is now working full time for BD Motorsports Media at 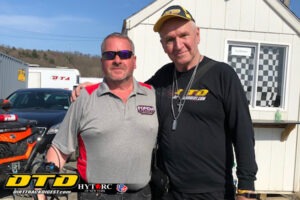 Fonda and Utica-Rome, meaning that both tracks are in very capable hands.

Check out the throwback reveal on Facebook of Stewart Friesen’s NASCAR Truck Series ride for the race at Darlington Raceway on Friday, May 6.  The Jack Johnson throwback look is truly a thing of beauty and a tribute to one of legends of our sport and to Northeast Modified racing.

Until next time please send any news and/or comments to biittig@yahoo.com