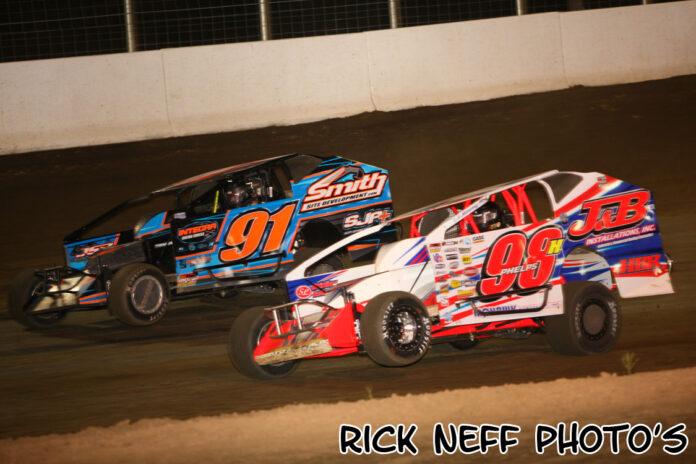 The Super DIRTcar Series officially kicked off the 2022 title tour with the season opening event at the Doug Rose promoted Bridgeport Speedway in South Jersey. 36 cars were on hand with 27 making the feature.

You never know who your going to run into when the first event of the season happens. Drivers who said they were coming don’t come and then drivers who you wouldn’t have never expected to be on are on hand in full force.

“Darren Kendricks, the owner of the car. asked me if I wanted to go to Bridgeport and I said yeah sure. I’ve never seen the place let alone raced here but here we are,” said Lindberg. Gary would make the feature and finish a respectable 16th place in the 75-lap affair.

Debuting a brand new TD5 Troyer that had yet to see any race surface since being built was Tim Sears Jr. Sears made the nearly six-hour trip to Bridgeport only to have to pack up early with driveline failure.

Making his first ever appearance at Bridgeport was Guilderland, N.Y., speedster Marc Johnson. Johnson, the 42-year-old Lebanon Valley regular, was ready to tackle the Bridgeport Speedway.

“When you show up to a place you’ve never seen before its great because you have no expectations. You can go out and be good or be way out to lunch and develop a notebook for future appearances,” said Johnson.

Johnson started the 75-lap feature 3rd but a flat tire in the feature relegated him to a disappointing 14th place finish.

Also suffering a flat tire from hitting debris on the track during the feature was Saratoga Springs, N.Y., native Jack Lehner. Lehner rebounded for an 11th place finish after starting 5th on the night and coming from the rear after the tire change.

Dominick Buffalino is living the ultimate dream he always wanted.

“Its everything I ever wanted out of racing Modifieds” said Buffalino. “Racing the 126 is a lot of work. I put a lot of pressure on myself. When things are going great its the best job ever then when things go wrong its like the whole world is on top of you.

“I’m having like the worst start to the season ever. We got great speed and then crazy things happen and we get finishes that look bad on paper. I’m not that great on the Hoosier’s and running a big-block is also hard versus these guys that do it nearly everyday. This Kevlar engine has lots of torque and we run here weekly with a small block so I know the track well.”

Unfortunately, Buffalino who started on the outside pole, dropped out early and finished 19th.

Jim Britt made the feature only to have the car not start or turn over when the command was given to start the engines for the feature.

Alex Yankowski ended his night early when he pulled off the track while running in the top five with a plume of steam from under the hood. According to the team it was a hose clamp that had come off and there appears to be no engine damage.

Matt Sheppard had his night come undone when terminal engine woes sidelined him out of the feature. He’s the defending Super DIRTcar titlist and is the favorite what would be his unprecedented ninth overall SDS title.

Tim Fuller won the 2021 version of the event and took home the big check. In 2022, Fuller went home empty handed and didn’t make the feature. In his heat race he had a spindle break. The team replaced the front end and then in the consi he tagged the wall and broke the yoke on the drive shaft ending his night.

Billy Decker confirmed his intentions to run the full Super DIRTcar Series tour but not before venting before starting the feature 26th.

“We are sucking bad. If we continue to suck like this we probably shouldn’t chase the series.”

Cooler heads prevailed while his longtime crew chief Scott Jeffery changed a left rear shock just before Decker was to start the feature. Also, in between the moment of frustration Decker did manage to smile when he was told that the radio station in the team truck would be put on something that he and Scott could agree on.

“Good that’s important. We need to have that kind of understanding,” quipped Decker.

Decker finished the feature in 9th.

Jimmy Phelps will miss the upcoming Series race at Albany Saratoga in June. However, he’s been told he would get a hardship allowance and some points. Phelps will follow the entire tour “unless the wheels come completely off our program.”

Making the most of his racing adventures is Mike Mahaney. Mahaney no longer a platinum series member and he is okay with that.

“DIRTcar had to do what they had to do. We are here to race for $7,500 to win. No one comes to the track worrying what it pays to start. The beauty of not having to be at every race is that we can determine what best benefits us. What track do we race at that will gives our best chances or making a good payday. If we chose not to go to a track that I’m not good at that’s OK there is no penalty,” said Mahaney.

When pressed about if he fears not making the feature and not having that guaranteed starting spot available to him that Platinum members do Mahaney responded by saying, “If I can’t go out there and put this car into a qualifying spot on my own skill set then I’d probably better find another occupation.”

Mahaney also went on to add “if we could run on Saturday nights at Airborne with a small-block we would be there every week. It costs over $500 to fill the tank on the motor home so racing weekly isn’t going to cut it financially. That’s why I don’t have a set Saturday schedule. I’m racing at Airborne on Saturday with the 358 this week and I will always be at Malta on Fridays.”

Mahaney also updated on the catastrophic engine failure that happened to him at Orange County in early April.

“The crank broke and then it broke two rods and pistons and wrecked the valves. We had to send the head out to be repaired. I’m not blaming anyone on the failure. It happens. There are no warranties on racing engines. You as a driver know that this can and does happen from time to time. You just regroup and move on that’s the only thing you can do. You cant change what happened”.

Mahaney will be installing a new engine that he just picked up on Wednesday. Mahaney politely declined to say who the engine builder was that the engine failed on or the replacement engine. He chose to instead say “We use a variety of builders. We don’t put all our eggs in one basket.”

Billy Dunn had terminal engine issues while at Bridgeport.

Dunn raced last weekend at Fulton in DIRTcar 358 action. The car he used was the same car he had wrecked at Oswego.

“It was all sheet metal damage. There was no frame damage to that car,” said Dunn.

Look for Dunn to race select Series races with his big-block, will run the DIRTcar 358 series and call Can-Am home on Friday nights.

Stewart Friesen is taking the whole retro weekend for Darlington’s NASCAR truck race to a new level. He’s bringing a truck with an early 90’s Jack Johnson paint scheme. He’s also taking Ronnie Johnson to Darlington with him and will have him in the pit box during the race. Johnson is slated to fly down on Thursday morning and return Saturday to race at Fonda. According to Johnson, “missing out on Friday at Malta versus a once in a lifetime chance to go to Darlington isn’t something I debated about long,” said Johnson earlier in the day when I spoke to him in person.

Trying to save a few extra dollars – Stewart Friesen didn’t bring along his big stacker hauler. Instead he came to Bridgeport with one car and an enclosed trailer and pick up.

When asked about it he said, “It gets way better mileage and has no trouble going up hills versus the toter home.”

The average cost of diesel fuel in the Northeast is above $6 a gallon. Only two states in the country average below $5 a gallon on diesel and those are Georgia and Wisconsin. Fuel info provided by Tom Kloza of Oil Price Information Service (OPIS).

Jimmy Horton was added to the field as a provisional. Horton is among the tracks all time win leaders. Horton dropped out of the feature with what appeared to be terminal engine woes.

Ryan Godown is the new King of the Big Blocks at Bridgeport. He’s been on a winning streak at Bridgeport over the last year and has also been to an impressive victory earlier this year by winning one of the STSS Elite 50 events. Now he’s a first time Super DIRTcar Series race winner. They don’t call him the Ringoes Rocket for nothing.

The next race on the Super DIRTcar Series tour is Can Am Speedway on May 18th for the Thunder in the Thousand Islands 75. For more information see racecanam.com or superdirtcarseries.com