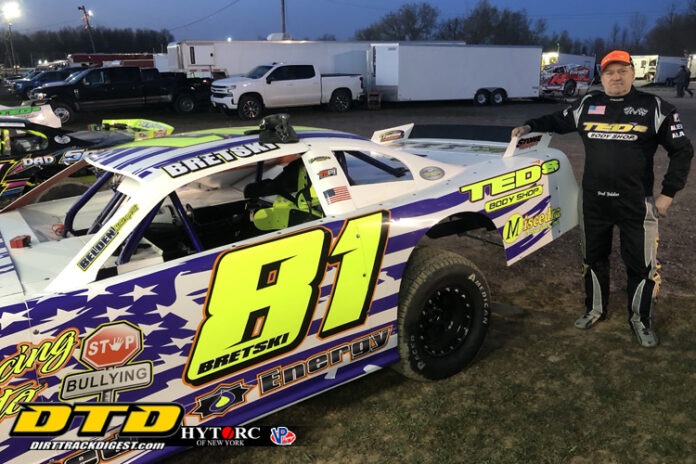 This weekend we started our travels with a trip west on the NYS Thruway to Exit 32 to take in the season opener for Utica-Rome Speedway, the “Home of Heroes.”  The night was dedicated to “Honoring Alex.”  Alex Friesen that left the racing family too early in the winter of 1996 in a snowmobile accident.  It happened in a flash and the “Man of Vision” as he was dubbed in one of the racing newspapers at the time of his death, was gone, on the brink of announcing new innovations in racing in 1997.  Alex Friesen was a racing promoter like no other in his time and also had a burgeoning racing career in the works.  His car No. 68 was one that fans watched wherever he raced.

We remember one of the surprise promotions of young Alex was a race, the Ransomville Nationals that paid $25,000 to win at the Friesen owned track in Ransomville, N.Y.  Paying that kind of money was unheard of at the time.  Today many fans that remember     draw comparison to Brett Deyo and mark him as the second coming of Alex Friesen.

Stewart Friesen was 13-years-old when his Uncle Alex lost his life and on Friday Stewart was remembering him with special graphics and No. 68 on his Halmar sponsored ride for the Mod main event.  As he unveiled the replica No. 68 we could see the pride and sadness in his face.  As the night progressed and Stewart drew seventh in the main event we knew he was going to pull out all the stops to win the 30-lap event paying $6,800 to win.  Matt Sheppard drew the pole and led the event from the start and in the waning laps, Friesen was in the runner-up spot until a caution came out with five laps to go.  On the restart Stewart slipped over the embankment and lost several positions and the chance for the win.  He was still able to finish in sixth position.

Our next stop was the pit area of Brett Belden, who drives the No. 81 Pro Stock.  Brett is right at home at Utica-Rome; his wife, Brenda works at the track and his daughter, Ashley, sells 50/50 tickets so he’s happy to be back home.

Brett says, last year he won a race at Brookfield Speedway in the Kenny Gates car and when he checked he found the win came on the 41st anniversary of his first career win.  At 63-years-old, Brett Belden says he plans to finish out his career at Utica-Rome and after the impressive run he had on Friday, finishing second to winner Beau Ballard, it doesn’t look like it will be anytime soon. 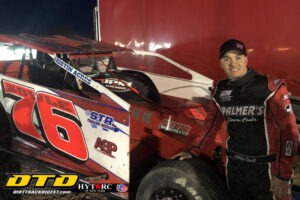 Stopped in to see Alton and Carole Palmer who have taken young racer, JaMike Sowle under their wing this season.  JaMike is eager to listen to the racing knowledge that Alton shares with him as the season progresses and there is a lot of knowledge that Alton has to share.  He still holds the record for most wins in the Sportsman division at Fonda and has been a car owner, along with Carole, for many of Fonda’s champions.  It’s great to see JaMike get his chance to prove himself in racing.

Our evening at our Saturday night home track, Fonda, began with a visit to the Fonda Speedway Museum.  At the door we met 50-year veteran of the sport, David Lape.  David and his wife, Jackie are largely responsible for what the museum has become, a place to reminisce and remember the plentiful history of the “Track of Champions”. 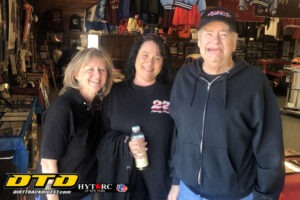 Dave Lape is one of the drivers that etched many memories in the history of Fonda Speedway and numbers in the racing record books.  His wins at Fonda number 99 putting him third on the all time win list.  We talked about all the new things going on in the racing world and the things that are still the same.

Before we left Harry Peek’s daughter Kate into the museum and we got to spend time with her as she recalled her dad’s days racing at Fonda.  Both drivers are a rich part of the history of the track. 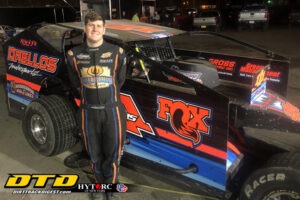 We stopped in the pit area of Demetrios Drellos and spoke with him and his parents who have been involved in racing many years.  Demetrios’ grandfather owned cars driven by the late Kenny Shoemaker and Paul Marshall at Fonda, so it is no surprise that one of the highlights of young Drellos’ career is winning at the “Track of Champions”.  He said, “Looking at the list of names that have won at Fonda, it’s great to be a part of that history.”  It is truly a special group to be included in, of 1399 features for Sportsman/Modifieds there have been 137 different winners.  The win list is Sportsman/Modifieds because in the beginning the headline division was called Sportsman. 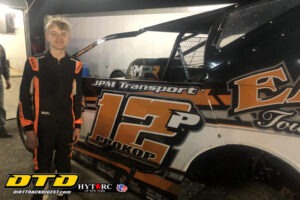 The Martin/Prokop team shared a car last season with both drivers, Seth Martin and Connor Prokop each taking a turn behind the wheel at Utica-Rome and Fonda.  This season they came equipped with team cars, No. 12M and 12P.  Friday night at Utica-Rome, Seth drove an impressive race from last place starting position to recorded his first career win in the Limited Sportsman.  On Saturday Connor drove to a very credible second place finish in only his second feature race in an open wheel car.  One-two for a rookie team is something to be proud of and we look for them to be a potent team this season. 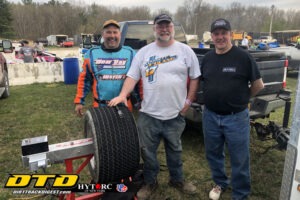 Our first full weekend of racing ended Sunday at Glen Ridge.  The afternoon started with the awards for the 2021 season and ended with an exciting beginning to the 2022 season.

We ran into a familiar face, Glen Ridge, Hall of Fame member, Butchie Irwin returned to racing at The Ridge after a 13-year hiatus.  Former owner of cars Irwin drove before he left in 2099, Donnie Downs had been trying to get him back in a car but Irwin was building his business and raising his boys.  Within the last year Irwin finally agreed and thought he was ready to return.  Before he left he had moved up to Sportsman so he decided to return in the Limited Sportsman division to get seat time.  Mitchell Poole owns the car and motor and Donnie Downs provides the garage and trailer.  Mitchell Poole owns three other cars and the driver, Garret Poland and his dad, Bert, have been a tremendous help to Irwin. 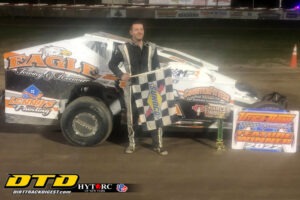 One of the things Irwin experienced in his return are the people and the way they have welcomed him back.  The driving is the icing on the cake.

Sunday at Glen Ridge while he was running second the top of the steering box cover came off, forcing him to pit.  Butchie said he needs laps and will be at Lebanon Valley on Saturday and his home track will be Glen Ridge.

Until next time please season all news and/or comments to biittig@yahoo.com 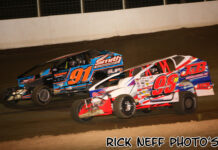