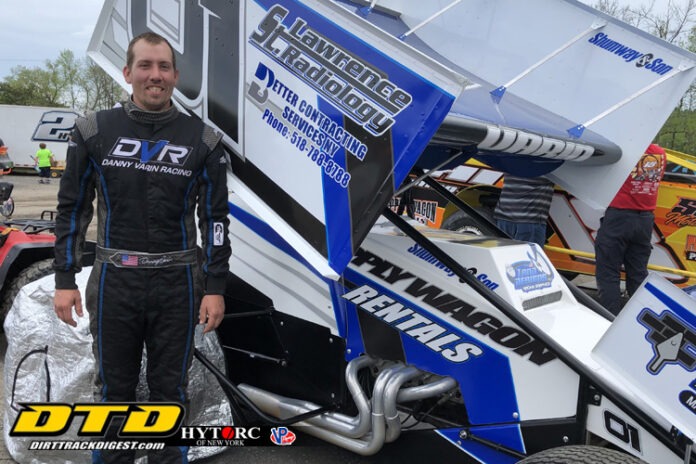 As our night started at the Great Race Place, we stopped at the DeLorenzo hauler to chat with one of the hottest drivers in the Capital District, Matt DeLorenzo.  Matt won two in a row at Fonda Speedway and opening night at Malta Matt was leading the feature when Peter Britten took away the win and he had to settle for second. 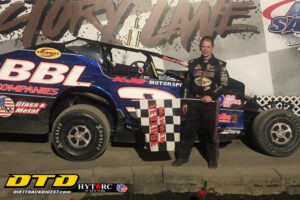 When we spoke with Matt earlier in the season he was not sure how much racing he would be doing this season.  So Friday we decided to check back with him after his weeks of winning and he said his amount racing in 2022 had not changed.

Matt and his brother said they had worked on the heads and also replaced the block of a 2013 motor. After Friday’s Modified feature Matty D. stood in victory lane for the third time this season; three wins, six top fives and nine top tens.  It’s one great start to a season and we wish him well. Looking at Matt’s career wins at both tracks, he has 39 at Fonda and 16 at Albany-Saratoga. 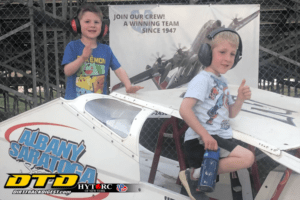 As we walked toward the grandstands at Malta we noticed a Mom watching her two boys who were climbing on the DKM chassis on display.  She said they come to the track often and having the car available for the boys to play on made the night easier for her because she couldn’t afford to pay for them to go into the pits where they could get close to the cars.  Twins Martin and Nolan Heath, 5-year-olds from Saratoga live right up the road from the track and love to come each Friday.  It’s great to see kids at the races having fun.  It’s important to have activities for the younger fans, they are the future of our sport.

Danny Varin was born into racing and was always around his father Bobby’s shop as a youngster so it’s no surprise and more likely it was expected that he would race. 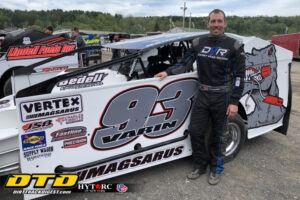 He began racing in competition when he was 15.  He’s now 31 and has a family, wife Jackie and daughters, Emma and Ave and another child on the way.  Danny says he would love to race everyday but like many racers he also has to make a living to support his family and his racing.  He is a partner with his dad and grandfather in their business, Supply Wagon Rentals out of Johnstown.

His racing currently consist of the No. 93 Modified owned by Ed Munger and for many seasons he raced the famous Dover Brake No. 00 Sprinter for Dave Cruickshank.  When Dave retired from racing, Danny bought his own sprint car and with the help of many dedicated sponsors currently is having one heck of a start to his season.  Sponsors on his new No. 01 Sprint car are St. Lawrence Radiology, Better Construction Service, WPC Westward Painting, Cobleskill Collision, Charles Tibbets Masonry, Land’s Designs, Shumway & Sons and Supply Wagon Rentals.  Of course a race team always needs a good crew and Danny has two very dedicated members of his team, Pete Northrup and Mason Olmsted.

Danny says his plan for this season is to race the better paying events and closer to home.  He does not plan to follow ESS or any of the other sprint series.  He will run the Modified when he’s not in a sprint. 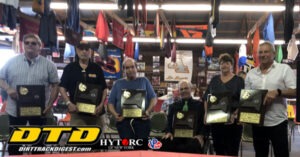 events for the series.  The ESS all time win list shows him with 19 wins.  He certainly showed his racing talent on Saturday night at Fonda when he was involved in an incident on lap one of the ESS feature causing damage to the wing of his No. 01 sprint.  He went to the pit and his crew was able to repair the wing, he started in the rear of the feature and came all the way through the stellar field of sprints to take the checker on Supply Wagon Rental sponsored night at the Track of Champions.  He was also looking fast in the Modified feature until he blew the motor on the No. 93, the second one in two weeks. 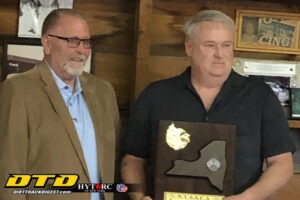 Sunday the New York State Stock Car Association (NYSSCA) held inductions of the class of 2021 at the Fonda Speedway Museum.  An impressive class of some of the most memorable names in the sport were honored and will be enshrined in the permanent home of the NYSSCA Hall of Fame at the Saratoga Auto Museum.  Those inducted on Sunday were: drivers, Brett Hearn, Roger Treichler, John P. and John C. Flach. Track owner/promoter, Gene Cole; car owner, Randy Ross; and NYSSCA Treasurer, JoAnne Flanigan. 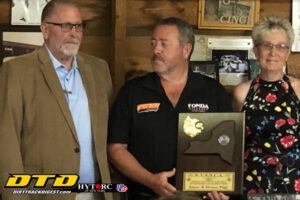