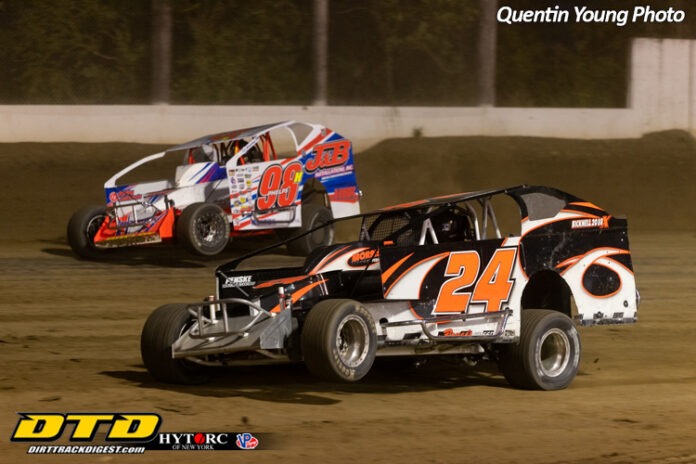 Jimmy Phelps tried something different which resulted in a runner-up feature finish.

Torrey Stoughtenger won his first big-block heat only to have disaster hit.

Drivers were loading up or crawling under their cars for extended periods of time as drive shafts were breaking like heavily used paper straws.

And there was so much more.

Phelps Gets It Together

The defending track champion Jimmy Phelps was content with the way the night finished, but it took quite a bit to get there.

He said, “I wasn’t happy with the car in hot laps and it was not a great heat for us. We were losing ground early. We went away from our package as Max (McLaughlin) suggested we try something in the left rear so we went with his package there. That’s why you saw Max doing the work on the left rear.”

Phelps started back in 17th and said, “I think the front slowed and the yellows helped. I was happy with the car as it was the best it has been here this season. We have work to do to catch up with Timmy (Sears) as he was really out there tonight.”

Torrey Gets That First One

Torrey Stoughtenger is basically a rookie and starting on the front row was beneficial, but the win in the third heat didn’t come easily.

A smiling driver stood alongside the No. 7s and said, “I had a good launch and was smooth. The car handled great. That sixth lap yellow put Ronnie Davis next to me, but he jumped the restart and was sent back. It felt good, but I never thought I had it won. I knew I couldn’t overthink it or get cocky. It feels so good to run with guys like this. It is a challenge and to be abel to finish ahead of Ronnie and Tom Sears means a lot to me.“

Torrey’s 2016 Bicknell is powered by a Hands Performance Engine and he is in his second year.

Looking at his brief career he said, “Last season I lost our engine at Weedsport and wound up losing half the season.  This year I also have had to make the adjustment from bars to coils and it has been a challenge.”

Stoughtenger had hoped for a good night as he started on the pole of the 35-lap Haun Welding sponsored feature, but on the second lap he stopped at the south end of the track.

A disappointed driver said, “I think we might have detonated the engine. We will see.”

Ben Bushaw and Jimmy Witko put on a thrilling battle in heat action as the difference was just two-tenths of a second for the Witko win.

Witko said, “I nearly started in the rear of the field as I wasn’t happy with the car. We have the old motor in the car and it is eight years old. This car isn’t exactly new as even though it says Bicknell 2018 on the panel we just changed a zero to a one and it is actually a 2008.”

Bushaw rightfully had high expectations for the feature, but after the heat they jacked the rear end up and he crawled under where remained for a loooonnnngggg time.

With some help from Brandon Ford and the Larry Wight team the work was underway.

Apparently drive shafts might be a problem this year as Tim Sears Jr. saw a brand new one cause extensive damage to his car at Bridgeport and rookie Dylan Zacharias went off on the hook at Brewerton with a drive shaft that had just two or three races on it.

Max Hill is a small-block rookie, but there he was running second in the Big Block main event.

What looked like a night for celebrating ended up a night back in the garage doing repairs.

Max started sixth and by the fourth lap was second behind Gil Tegg. He ran in the top four through the first half of the race, but chased by Larry White, Tom Sears, Tyler Trump and others. He was more than holding his own, until the 27th lap (when he was running seventh).

Looking back he said, “We had a great run going and that 22 car (Tegg) put me into the wall coming out of two.”

The 160 hit the concrete and came to a stop, but Max said, “Just some steering parts. I got away lucky”.

Wight Puts on a Show

Larry White started in 15th and was eighth on lap three. By the 23rd lap he had worked his way into second behind Tim Sears Jr.

With just eight laps to go the 99L went high between three and four. It appeared it might stick, but the back end had a mind of his own and headed for the point where the wall begins entering the fourth turn. Larry missed the physical barrier by a few feet, saved it, but fell back to seventh at the finish.

Justin Wiliams, Doug Williams and Jeff Isabell all appeared to lose motors as Kyle Demo won by six-tenths of a second over Clayton Brewer.

Brewer was the story of the race as he went from 10th to fifth only to have the car go around on him as he attempted to pass on the extreme high side.  ON the sixth lap he went to the back and restarted the effort to come from behind. He simply ran out of laps as he tried throughout the waning laps to get around Demo. A solid, exciting, nail biting run for the veteran Fulton driver.

Ryan Dolbear won the Sportsman and Damien Bechler the Four-Cylinders.

By the way, the driver and announcer Karaoke might have been a one and done intermission event. Proof again alcohol is definitely needed for karaoke.