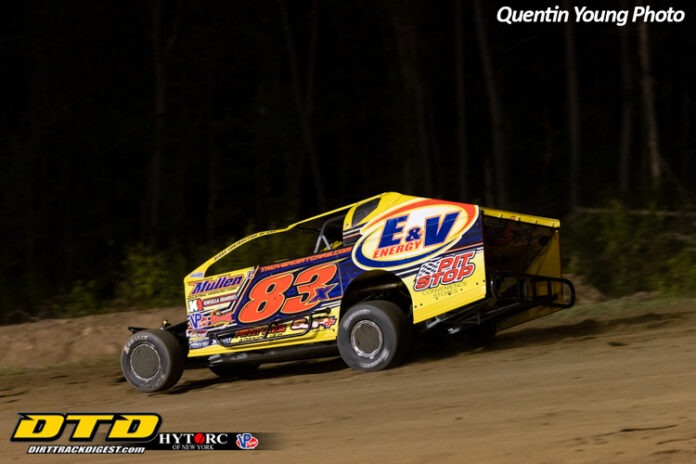 Zacharias is just beginning his career and standing in the Brewerton pits prior to racing action he talked about his challenges including how difficult it has been to switch from a chassis.

When told, “Tim says that his shift from Bicknell to Troyer has been easy and that each is about the same to drive,” Zacharias said, “That’s because he’s Tim Sears.”

Tim Sears Jr. has been a dominant force thus far this year at Fulton and Brewerton as his career continues to keep moving forward in a positive manner.

With the sweep of his home tracks this weekend he has put together three straight in his 358 at the Route 57 track while chalking up consecutive wins at the D Shaped Dirt Demon in his big-block.

Last year the team accepted the challenge of the Super DIRTcar Series for the first time and they are returning this year. However, the first two tour races haven’t been kind to the Central New York based team.

They brought the new Troyer big-block to Bridgeport for the Super DIRTcar Series lidlifter, but were headed home before hot laps were over.

Tim said, “The torque arm broke and hit the battery. It took out two yolks, the shift linkage on the rear end and there was massive damage. Everything was brand new. We loaded up and got home late and were able to go to work the next morning.”

Reflecting back to 2021 for his initial SDS trek, he said, “We had two DNF’s last year and had some good finishes, but they could have been better. At Bridgeport I was up to fifth and got a flat tire and at the Valley had a provisional, raced to sixth and ran out of gas.”

However, it’s a new year.

The Can Am SDS event didn’t treat the team very well either as Tim said, “I messed up in time trials and put us behind. I missed the redraw and you can’t do that in a series race. It was a rough and tough track, but we finished 12th.”

Sears noted, “But we will continue to follow the tour.”

He has been formidable at both of the Central New York speedways and noted, “They are my home tracks. I tend to go good there. I have a lot of laps and have plenty of seat time at Fulton and Brewerton.”

Continuing he said, “Usually we are always better at the end of the night than when we unload. We seem to struggle early, but the cars are good and fast. We just have lacked some early speed.”

He moved his program to Troyer Dirt Car as he left the Bicknell behind.

Sears adapted quite well and said, “Troyer dirt car guys are great for us and their dirt program is headed in the right direction. They have helped us with equipment and being that we are a family business it is better on our pocket. I really feel there is no difference between the two.”

“Timmer” is rarin’ to go and said, “Confidence is a key in this sport. You have to have confidence and not mess up. You have to come off the trailer ready to go. I really have to thank Kevlar for the motors as they have given me what I need to win races. The Big Block is new and the Small Block is parts from my old car.”

Looking for the future he said, “I need to gain some momentum on the tour and it is a matter of time before we run better. You have to unload faster, start up front as no one wins against tour drivers coming from the rear.”

So Modified (big or small blocks) fans can keep an eye on a driver who never seems to lose his smile no matter what the outcome or situation.

Tim Sears Jr. is off to a fantastic start at his home tracks and he hopes that can be translated successfully to his effort on the Super DIRTcar Series.