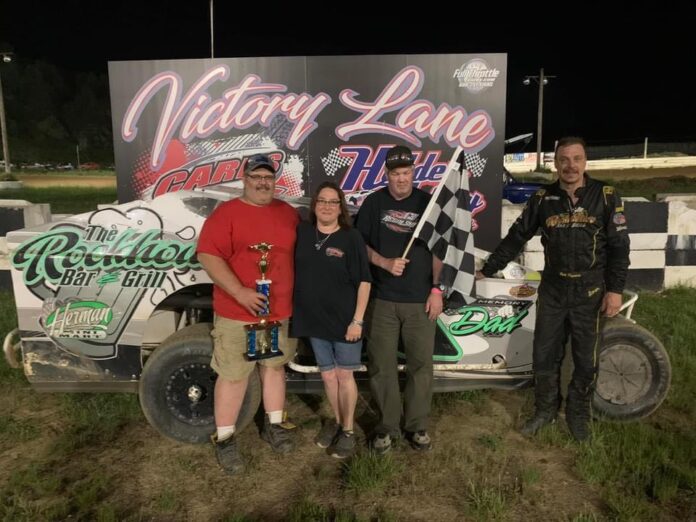 Rick Regalski has been driving Modifieds since 2013 and on Saturday finally achieved that elusive feature checker flag at Hidden Valley Speedway (formerly the Clearfield Speedway).

Regalski said, “I led every lap in the heat and in the feature. The guy I knew I had to beat was running right there alongside me at the end.”

However, the story behind the meaning of this one displays the deep roots race teams and family embrace. 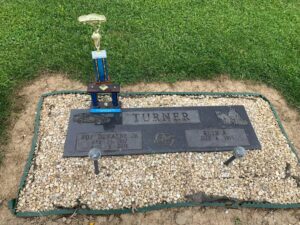 Rick explained, “I wasn’t driving my own car. I was in Mike Turner’s 96. He’s my crew chief. He had a car but didn’t have a motor. I have two cars in my shop that weren’t finished so we put my small-block in his car.”

Continuing he said, “Mike is my crew chief and lives and breathes racing. His dad passed away in ‘11.  In 22 years Mike has never been able to get a win. He came close shortly after his dad’s passing, but Brian Swartzlander passed him in the late going. Mike eats and sleeps racing. He does most of the work in the shop as I am busy with my business.

“I told him that when I finally got a win that it would be dedicated to the old man,” noted Rick.

Continuing, “We had a two hour ride home and Mike hugged that trophy all the way back. We went to the cemetery in the morning and placed the trophy on his dad’s tombstone. It has been 22 years and we got one. I told him in victory lane that this was for your dad.”

It was a genuinely emotional night Mike’s uncle Kevin, who celebrated a birthday the day before, was there in victory lane while in everyone’s heart and mind was Mike’s dad Dewayne Turner Jr. who was with them in spirit.

Regalski noted, he has been close before, as he said, “After running Eldora a couple of years ago we headed back to Sharon. It was a green to checker race and Jimmy Weller got by me and I finished second. At Latrobe I had a heim break and sailed off the turn and hit a tree. I started 22nd and made it all the way to third when that happened.”

Continuing, he noted it wasn’t the first checker, as “I won a non-winner race in my uncle’s car, but this was the first actual feature.

He had many folks he wanted to thank and said, “Mike Turner does so much and is a great crew chief. Adam Schnur and Herman Mini Mart do so much for me as a sponsor. Deanne Byers, Tim Slater and Christine (soon to be Ricks wife) and the Rockhouse Bar and Grill, RCR Garage in Franklin, S&B Industrial and Carrols Kennels are all very important to me.” 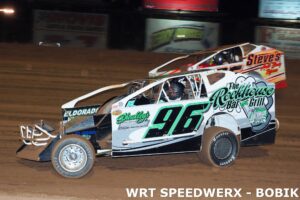 In conclusion, Rick said, “I was pretty choked up. We have been beating on the door. It isn’t for lack of heart or trying. We are always trying to keep up with the Jones. We don’t have a budget others might, but we live and breathe racing.”

Rick is flying high, but on June 8 he said, “I need to have surgery on my shoulder and it might take some time to recover, but before that there is a BRP show at Hummingbird and another race at Tri-City. I hope to be back for the Ransomville BRP race. However, Anthony Tramontana, a northeast driver, is coming out to run our car at Lernerville. He wants to race there and he is an up and comer in the Modified class.”

However, for Rick Regalski Saturday May 21 will never be forgotten by this race team as he achieved his first feature win and remembered all of those who helped him get there