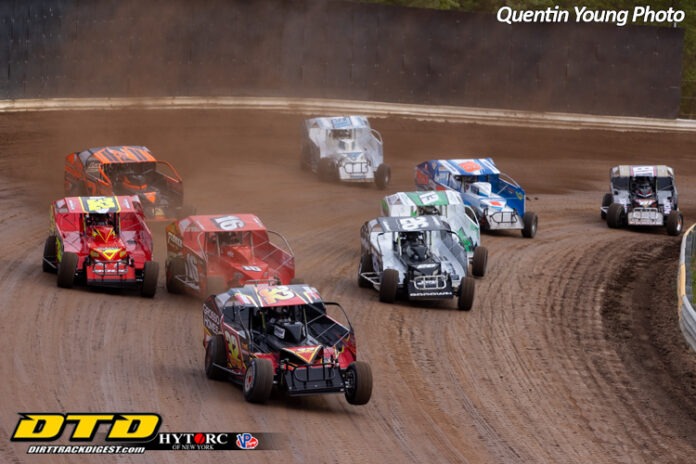 It might not be summer according to the calendar, but Matt Sheppard is sizzling hot right now. No matter what track is on the schedule these days you can count on one thing and that is Matt Sheppard standing in victory lane. So far in the month of May, Sheppard has won eight out of the eleven races he has entered with his latest win coming Tuesday night at New Egypt Speedway in the running of the “Dirty Jersey” 50-lap Short Track Super Series South Region race.

“It’s been a good couple of weeks, that’s for sure,” said a happy Sheppard while helping his crew prepare the No. 9S for tech inspection after Tuesday’s race. “We have had some fast race cars and beyond that, we have had some really good luck and that probably the two things a team needs to get on a streak like this. We have also been helped with some good draws and I don’t car what anyone says, it certainly helps. There are some nights where we might have a car that is capable of winning, but we start so far back, we never get a chance to find out.

“These races are just getting tougher and tougher to win and the competition also keeps getting tougher all the time. You have to be prepared and have your stuff together and it helps when you draw some good numbers along with some luck in yellows going your way. It takes a whole lot of everything to keep this going and our team is doing that right now.”

Sheppard started the 50-lap in the third spot as Paul Mancini and Matt Stangle led the field to the green flag. Sheppard quickly disposed of Mancini leaving only Stangle in his way as they raced for the top spot. A lap 14 restart proved to be all Sheppard needed as he outpowered Stangle on the outside going into turn one to blast into the lead.

“Stangle was running good, and I think he was a little timid there going into one,” explained Sheppard. “He was trying to protect the bottom which I don’t really blame him for and I just got a big run going into turn one, the track was really wide getting into one, so it gave me a lot of room and I was able to make it stick and pull off the pass. It certainly would’ve been a lot harder to get by him in traffic.”

After Sheppard took the lead there were multiple cautions throughout the middle part of the race, but each time Sheppard was able to fend off his challengers and rocket away to a safe advantage. At this point, the only thing between Sheppard and victory were lapped cars.  The Savannah, N.Y., driver was able to navigate them successfully to take the $5,000 win.

“For the most part, I kind of wanted to get down on the bottom, but I was having a little bit of a carburetor issue,” said Sheppard. It kept stumbling so I finally gave up on that and said, ‘screw it’ and just stayed up top and just drove the crap out of it.  That seemed to work out a little better for me. All-in-all, we had a really good race car, had a good draw and everything worked out for us tonight and hopefully we can carry it forward to the weekend.”

Neshanic Station, N.J., driver Matt Stangle has shown flashes of brilliance in his young career on the Short Track Super Series, but really put his name on the map with a strong third place finish in last year’s Speed Showcase 200 behind the two of the best Modified racing has to offer in Stewart Friesen and Matt Sheppard. After three races in 2022 in the STSS South Series, Stangle sits eighth in the standings and looks to build off a strong second-place finish in Tuesday’s Dirty Jersey race at New Egypt Speedway.

Starting from the second starting spot, Stangle immediately raced to the lead at the drop of the green flag by outgunning pole-sitter Paul Mancini. Stangle stretched his lead as the field battled behind him. Stangle held his lead as Matt Sheppard tried to run him down. A lap 14 restart proved to be what Sheppard needed as he was able to get past Stangle on the restart to take over the lead.

“I kind of messed up there on the restart going into turn one,” said a happy yet disappointed Stangle post-race. “I slowed the car down a little too much and pinched myself down on the bottom, but it just killed my momentum and he was able to get around me on the outside. Once he (Sheppard) got by me, he started to pull away then I started following him where he was running and I was able to stay with him.  Once he got to the lapped cars I think I had used up my tires too much and those last laps I was just trying to hold on.”

It was a good race for the family-owned No. 6 team which has admittedly struggled with bad luck much of the 2022 season.  For them to get a good run was critical as they go into the summer stretch.

“We needed a good run tonight,” explained Stangle. “We have had nothing but bad luck this season so far, our cars have been fast, but we just cannot catch a break whether it be a flat tire or something breaking. Hopefully we can take this run tonight and keep it going.”

Godown Keeps his Strong Season Going with a Podium Finish

In what has become a season to remember so far in 2022, Ryan Godown just keeps on rolling as he drove to a hard fought third-place finish after starting in the 10th spot. From the halfway point of the race on, it was easy to see the Godown had probably the fastest car on the racetrack, but with no cautions after lap 18, Godown just ran out of time to catch the leaders forcing him to settle for third.

“I really thought the car was better than third tonight, but we just got ourselves a little behind starting tenth,” said a happy Godown after watching his son Ryan Godown Jr., win the crate Sportsman race. “Then we were on a restart starting fourth and kind of went three-wide into turn one. The guy on the bottom sort of wanted the spot more than the guy on the top and I got shuffled back a couple of spots. It went all green to the end and I just didn’t have enough time to make it up. I felt like if we had a caution there, we might have had a chance for the win. I knew I was better than Stangle, but I am not sure if I could’ve gotten by Sheppard, but it would’ve been nice to have had a chance.

“Look, we are happy finishing third, but I thought all night that we had a car capable of winning but sometimes the chips just fall your way. If Matt (Sheppard) starts tenth and we start third maybe it turns out different but who knows, the draws are part of racing, so what are you going to do.”

It was like a homecoming for Godown racing here at New Egypt Speedway. The Ringoes, N.J., driver has accumulated 76 total wins at track (47 Modified, 14 Sportsman and 15 New Egypt Wingless Sprints) along with six total championships (four Modified and two Sportsman). Godown was looking forward to racing here tonight and was eager to get back to victory lane at the track he once called home.

“I was looking forward to coming back here to race and we had the car to win,” explained Godown. “The car was awesome and I am really looking forward to coming back here again with sail panels when they have a special show or when we have a night off from Bridgeport. I like this place; this place was my home for many years. I tried my hardest to win tonight. I wanted to win for the hometown crowd, but it just didn’t happen. We were close and had a good car and anytime you can get on the podium with these guys, it’s a win and we’ll take it, put in our notebook and hopefully we will be better for next time.”

Mike Gular and Jordan Watson were forced to use series provisionals to make the feature. Billy Osmun III was the track provisional…

Danny Bouc, who started second in the first heat race, was running second and in a redraw spot when the No. 32 inexplicably shut off causing Bouc to stop on the track. The car then refired, and Bouc rejoined at the back of field and finished one spot short of qualifying. Bouc did win his last chance race and drove the car from 21st to an impressive fourth place finish. Talking to Bouc afterwards, he has no idea what caused the car to shutoff in his heat race…

Mike Gular made good use of his provisional starting spot. The 2021 New Egypt Speedway track champion started 25th and raced his way to a 10th-place finish…

Billy Pauch Jr., had high hopes in his return to New Egypt Speedway on Tuesday night. Pauch has had much success at the central New Jersey track left the track last season after a dispute with track management over technical issues. Pauch wanted nothing more than to get back into victory lane. Pauch was up to fourth place in the feature and coming on strong when the No. 96 suddenly slowed and pulled off with what was determined to be a problem with the jackshaft…

It was a good night for the Godown family with Ryan Sr., finishing third in the Modified feature and Junior pulling off the win in the crate sportsman feature…

Next up for the STSS South region is a Tuesday June 7th date at the Bloomsburg Fair Raceway. This race will be a combined North/South series race. Last year’s race was rain shortened with Jeff Strunk taking the victory.