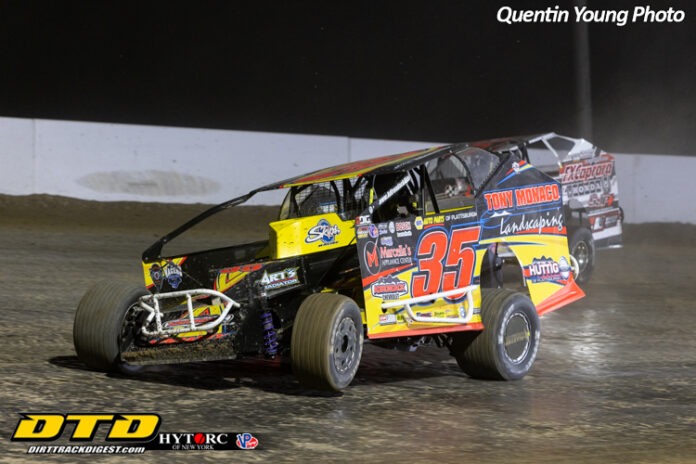 There was one yellow flag early in Heroes Remembered 100 at the Weedsport Speedway and from there Super DIRTcar Series Modified drivers followed with 95 straight green flag laps.

Thus, strategy probably went out the window as yellow flags are as predictable as snow in Central New York in February,

However, Sunday night simply was that much different.

Stewart Friesen started fifth on the 18th lap he used the low line to grab the lead from Matt Sheppard and the eventual winner never faced a challenge. However, he did bound the right rear off the outside barrier between three and four on the 34th circuit and nearly got collected by a lapped car as he got squeezed coming off turn four midway through.

At the end, there sat on Victory Hill the Halmar No 44 as well as father and son, Stew and Parker Friesen celebrating the win.

Friesen said, “The race track was really slick tonight. There was some moisture at the top of turn one and as the green remained out I got into a good rhythm and had a lot of good laps, but I had a couple of bad one too. Overall the car was just a great race car for me tonight.”

Mike Mahaney settled for a hard earned second after being set up with his first fast time of the year and a dominating heat win.

However, the luck of the redraw was Mike’s 2022 season in a nutshell as he drew 10th.

The record may show him going from tenth to second, but he said, “I fell back to 14th in the early going. I simply wasn’t going anywhere around the outside and it felt really good on the bottom.”

He was closing in the late going and said, “You’d think 100 laps would be enough, but it wasn’t tonight. I was closing in at the end, but there wasn’t time. The draw did hurt as I drew 10th. Ninth would have been better as I wouldn’t have had to start on the outside.”

But, he concluded, “I’ll take it. This is big for our team.”

Erick Rudolph settled for third after starting on the front row.

In his best Super DIRTcar finish of the season, Erick said, “At the midpoint of the race I thought I might have had the best car, but in the end I was hanging on. I struggled a bit in traffic, but it was a good run for us.”

Matt Sheppard, scored fourth, ran strong early, but noted, “There really wasn’t much I could do. If you are off a little you are off too much here. We went to our notebook from last year and made some small adjustments, but it didn’t fix what we needed.”

Larry Wight completed the top five and said, “The 44 (Friesen) and I seemed to be able to run the extreme outside. I felt like I could run better between one and two while three and four was just a crapshoot as the bottom, middle and top were about equal. I needed to be a little tighter center off, but it was a good night for us.”