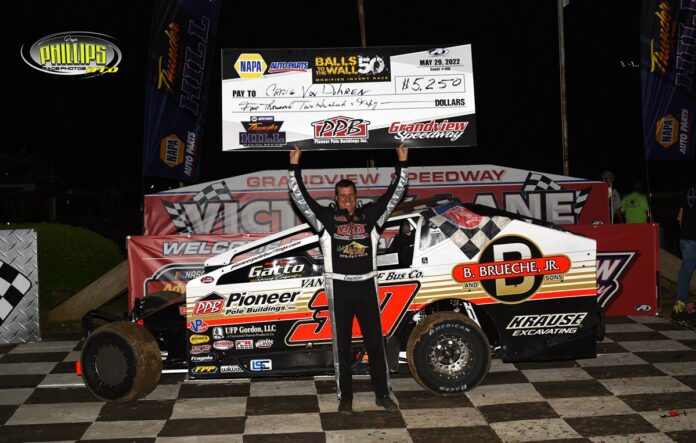 To say the 2022 season has gotten off to a great start for veteran driver Craig Von Dohren is an understatement. The good news started a couple of months ago for Von Dohren when it was announced he had been elected to the DIRT Motorsport Hall of Fame. If that wasn’t enough the Oley, Pa., driver has gotten off to start that can only be described as sizzling! From his first race of the season at Georgetown back in March which he won to his tenth race of season last night at Grandview, Von Dohren has won an amazing seven of ten starts with all wins coming aboard the Bueche and Sons No. 30.

“Man, that’s hard to believe,” said a subdued but happy Von Dohren after he climbed out of his No. 30 after driving it back to the pits after passing technical inspection. “When you think about it, it is really hard to believe. We have been good every week and the track came to us at the end tonight. We were slipping and sliding around early, then it started to get a little grip back in it and I was able to turn the wick back up. I am really grateful.  I just don’t know what to say.”

As everyone knows, Von Dohren is one of the all-time great Modified drivers, especially on the PA 358 circuit. The man generally just known as CVD is the all-time leader in wins at both Grandview Speedway and at the Big Diamond Speedway along with multiple championships at both tracks, but to this day, the veteran driver never has had a run to start a season like he is on now.

“I have never been going like this before to start a season,” mentioned Von Dohren. “I honestly just don’t know what to say at this point, it is so hard to believe. I mean we have always had good stuff and we are just hitting on all eight cylinders right now. We are getting some breaks and have had some things go our way. We did kind of set up for the end tonight and it just all worked out. I am really grateful to be driving this car.”

Sunday’s Thunder on the Hill Balls to the Wall 50 had a unique format with the leader at lap 30 and at lap 40 each getting $1,500 but with the caveat of having the top four inverting for the next ten lap segment. Von Dohren was running fifth when the yellow flag came out at lap 30 to end the first segment meaning he missed the invert and would restart in that same spot when the race resumed.

A good restart when green was displayed to start the second segment found Von Dohren vaulting from fifth to third getting by Duane Howard who led all of the first 30 laps winning that segment and Timmy Buckwalter. When the second segment ended on lap 40, Von Dohren was third meaning he would start second for the final 10 laps after the invert.

When the green flag came out for the last segment, Von Dohren wasted little time getting by leader Buckwalter to take over the lead. Once Von Dohren was in front, there was no stopping the 12-time Grandview Speedway champion as he streaked under starter Ray Kemp’s checkered flag to take his seventh overall win of the season and his fifth at Grandview. In the six races run thus far at Grandview, Von Dohren has five wins and finished second in the other race.

“I am not sure what was happening with the track early on, it was a little different,” explained Von Dohren. “It was rolling or something in the beginning, but then it started to come in and it just got a little bit of rubber there and I was able to find it. I tried moving around, but it you move around and make a mistake and someone gets by you are an idiot.  If you find it you are a hero and that’s what makes it tough. When Timmy (Buckwalter) took the inside on the last restart I thought we were in trouble. I thought if I could get a run on him going into (turn) one and at least keep it next to him I would have a chance to out drag him going down the backstretch. I was able to clear him and I just kept pushing it to try and get a big of lead as I could. I knew Jeff (Strunk) was pretty good and he has been good all year and has just fallen short.”

With the start that Von Dohren has had to start the season, him and his team just hope that they can keep it rolling as the season progresses into the summer.

“Hopefully we can keep it rolling next week and maybe we can get Big Diamond in this week,” said Von Dohren. “It would be nice to get some races in there for the track’s sake and for Dave’s (Von Dohren’s car owner at Big Diamond Dave Dissinger). That is a great car as well, we have the motor all back together and are looking forward to getting that car back on the track.”

Von Dohren has a good fanbase but like anyone who wins a lot especially at one track the detractors will make their feelings known and I asked Von Dohren about that.

“I think it is fun,” explained Von Dohren. “I mean, I didn’t I was going to win and last night we got to restart fourth instead of third or fifth which helped because the outside was the place to be. Look, you just have to ride the horse until it throws you.  Hopefully, we can just keep riding.”