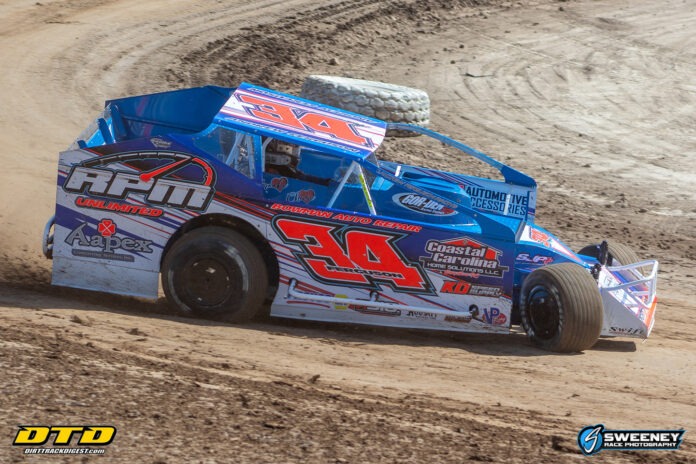 Saturday night at Fulton Speedway was going to be a night to remember, one Andrew Ferguson was never going to forget.

Well, it turned out that way…for all the wrong reasons.

Ferguson was so close and reflecting back said, “Actually, with about eight laps to go I looked back when I was coming out of two and I could see Dave and Timmer going into one so I knew I had some room and the 10R (Ryan Richardson) and 160 (Max Hill) were racing hard in front of me. I kind of stopped pushing the issue.”

Well, the first and only yellow came out with three laps left when an inadvertent yellow was called by officials as Dave Marcuccilli bounced of the frontstretch wall after getting tangled up with a lapped car.

However, due to the inadvertent yellow, the M1 wasn’t penalized.

Ferguson said, “I was mostly wondering after the race that I knew the M1 was second. They threw the caution and said it was inadvertent and told the M1 to take his spot back. I thought he was starting second behind me because they never ran through a line up.”

Andrew noted, “I didn’t drive as good as I needed to at the end of the race and the 83x (Tim Sears Jr.) beat me. He is on his game and it’s going to be tough for anyone to beat him. Hopefully we will be able to get some momentum rolling from there on through.”

Entering the Fulton feature, Sears Jr. has been dominant on the Fulton-Brewerton Speedway circuit with six, yes seven, consecutive victories between the two tracks.

Andrew Ferguson lined up in the front row and it appeared, as the race progressed, if the yellow stayed in Ricky Breed’s holster that there would be a new streak breaking winner.

With a dozen laps left there was Sears nearly a half track behind.

Was the streak over?

Sears starting 16th had his work cut out for him and with three laps to go he went from third to first with a pass of runner up Dave Marcuccilli and leader Ferguson.

“Timmer” found himself in the top ten just before the halfway point and on the 27th he was fourth and two laps later third.

With three laps to go he got the point and it was to lead to seven in a row.

Tim said, “Maybe everyone else fell off at the end. The car just got better as the race progressed. However, I don’t think I had anything for Ferg. I felt so bad for him as I’ve probably taken six to eight wins from him in the last 10 years.”

Continuing he noted that he couldn’t let emotions dictate his run as Tim explained, “I let a person beat me once (when he was running late models) and I felt terrible. I will never do that again. You gotta earn it.”

And on Saturday night Tim Sears grabbed victory from what appeared to be a loss.

It’s racing. He got a break with three laps to go and made the most of his opportunity.

It was just one of those nights.