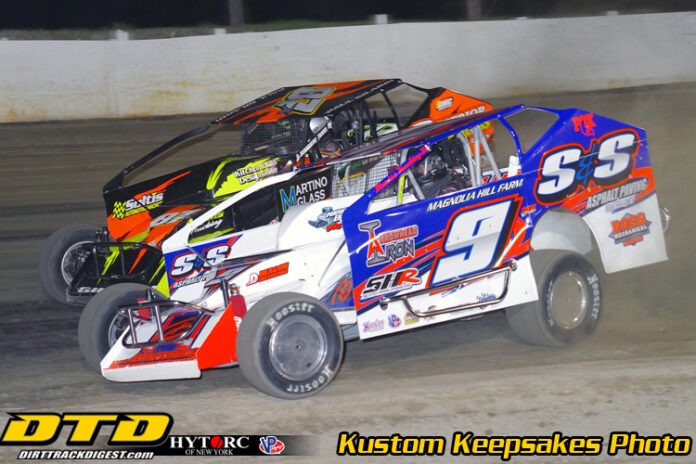 A very hot day greeted spectators and competitors alike for the second annual King of Spring 100 Super DIRTcar Series race at Lebanon Valley. Temperatures were into the low 90’s as the teams started to arrive, making for some very challenging racing conditions on the drivers.

Marc Johnson rebounded nicely from a tough night at Weedsport on Sunday to finish in the second spot behind winner L.J. Lombardo.

“After last night at Weedsport, it was a long, rough, mentally abusive night,” stated Johnson.  “This is just a blessing to come here with the No. 9 car and all the guys and everyone that sticks by me.  I’m super happy to be on the fronstretch with these guys.  Congratulations to LJ, that was a hell of a run.  I’m happy to be on the podium.”

Johnson tried to pry the lead away from Lombardo on several restarts only to come up short by bit at the end.

“I felt like on the short run he’d pull away a little bit,” stated Johnson.  “I thought we could get him back on the longer runs.  It was hard to tell.  I’m just happy to have a good race and a good race car with the Super DIRTcar Series.  I wish Kevin (Starchak) could have been here.  I’m sure he’s watching from home.  This is for him.”

All-time Modified winner and champion Kenny Tremont had an early exit from the feature when according to Tremont, “the car just wouldn’t turn.” Tremont has had a very vanilla season so far at the Valley with recent trouble with brakes and he’s still not 100% comfortable with the new coils suspension system that his Bicknell runs.

Australian speedster Peter Britten was leading the field early and holding his own against Valley regulars Lombardo, Johnson and Brett Haas but, before 30 laps were in the books, Britten was done for the night with what he said was “power steering issues.” If Britten wasn’t done in with his power steering issues, he was surely going to be in trouble with a severely blistered right rear tire.

Another leader who has so far been the dominant player at the Valley this year, Andy Bachetti, suffered terminal mechanical woes with transmission failure while leading the race with a commanding lead. Bachetti recorded a 20th place finish after starting eighth.

One of the most popular drivers of the Modified ranks at the Valley is Eddie Marshall. At 63, he’s still turning competitive laps at the Valley. Earlier in the season Marshall had to miss a week due to COVID. He returned a week later and won the feature. On this night he set fast time in his group time trial, won his heat with ease and finished a solid sixth on the night.

Coming off a win the night before at Weedsport, Stewart Friesen is always a threat when he unloads the potent Halmar No. 44. Friesen had an up and down night in the feature and ended up dropping out with rear brake failure after coming in earlier in the feature to take tires after a flat.

This year Billy Decker is running the Super DIRTcar Series full time for the Smith Excavating team. Decker seemed to shake off his early season struggles with a stout third place finish. A completely drenched in sweat Decker exited his potent Bicknell entry outside of victory lane on the front stretch and was happy with his finish.

“We had some early season struggles but this is a good team. I’ve been with these folks for a few years now. We won a STSS regional title a few years ago and we’ve got great equipment. Things are starting to come together,” said Decker.

A flat tire late in the 100-lap feature ended Matt Sheppard’s top five running position on  on lap 92. Sheppard would end up finishing 14th. Sheppard was the defending winner of the event.

With a new crew chief and a late start to his season, things didn’t go quite the way Keith Flach would’ve liked on Monday night. From the time the team unloaded the Flach No. 43, it was plagued with engine trouble. The team changed the distributor cap, fuel pump, and ignition box and still couldn’t get the engine to go. Flach’s engine builder Billy Mathis was on hand to assist in trying to get the engine to perform correctly, but it was to no avail. Flach, who nearly didn’t race in 2022 because the family business is so busy, is in the process of building a new Bicknell car that will serve as the primary Valley car.

Flach is currently utilizing one car for both Malta and Lebanon Valley and using a conventional trailer to tow to the races. The team’s stacker is still at the shop as with only one car it doesn’t make good business sense to haul that around town.

He’s been hot right from the start of the season at his home tracks. Tim Sears Jr. is turning heads with his big block and 358 program at Brewerton and Fulton. He’s won six races this year with a Troyer TD5.

“We are going great on the weekly stuff we just need to parlay that to the Series. The competition is a lot stiffer on the road but we have the equipment to run with these guys. Some of the places we go to only once or twice a year so its hard to be good right off the trailer with limited notes.”

Last year in his first ever visit to the Valley in the Spring 100, Sears Jr. ran out of gas.

“The car uses a lot more gas here than other places and we simply didn’t put enough in the car”.

17-year old Alex Yankowski had hoped to just make laps at the Valley in the feature.

“I’m out to lunch here. This is a difficult place to get around and especially with hardly any notes or experience here. It’s intimidating for sure. We just hope to make laps and make it to the end” said Yankowski before feature time.

According to Randy Williamson the staff at BRP was recently on pace to build nearly 450 cars in a year. However, the demand has dropped off some and now its projected that they would build around 375 cars.

“That’s too much. If I had an optimal number that I’d be happy with I’d say around 200 would be perfect. I want to see a competitive landscape with the chassis builders. If one player is the dominant player its not a good thing. Everyone is busy, in fact some are way too busy like PMC and HigFab. At the end of the day, I want to be remembered as someone who helped anyone. Whether they were a customer of mine using a BRP chassis or another competitor, if I can help you become successful that means a lot to me. Maybe someday you’ll return the favor and buy a car or parts from us but it’s not expected.”

The 2023 BRP chassis will go into production in the middle of August with delivery in the first week of September 2022.

Seven of the top 12 cars in the overall finishing order were Valley regulars.

According to Lebanon Valley promoter Howie Commander who was in attendance for the evening, “I have no plans on retiring anytime soon. I’m in my mid 70’s. You need someone to run this place, a place like this, someone who has the business acumen to keep it going. I’m approaching 17,000 races that I have been in attendance for. No one in the world has been to that many races. This has been a challenging year. We are down about 30% across the board, but people want entertainment so there is always going to be the entertainment value here. We are holding the line as best we can, but everything is up: food, fuel, labor. We are in trying times and there doesn’t appear to be any relief in the near future.”

Ronnie Johnson was on hand for the Spring 100 however, a discrepancy over going to the scales or to his pit spot over an errant flagman error caused Johnson to be disqualified from his fifth place finish in his heat. He would had to have started last in the LCQ. The team elected to pack up and head home.

Shaking hands and trying to round up interest for his upcoming STSS event on Fathers Day at Devils Bowl in Vermont, was promoter Mike Bruno. Bruno was on hand with his wife and son Johnny who is a full time college student in Orlando Florida.

The next Super DIRTcar Series event will be on June 24th at Albany Saratoga Speedway with a 71-lap feature event. Visit Superdirtcarseries.com for all the latest information and ticket info on upcoming series races.