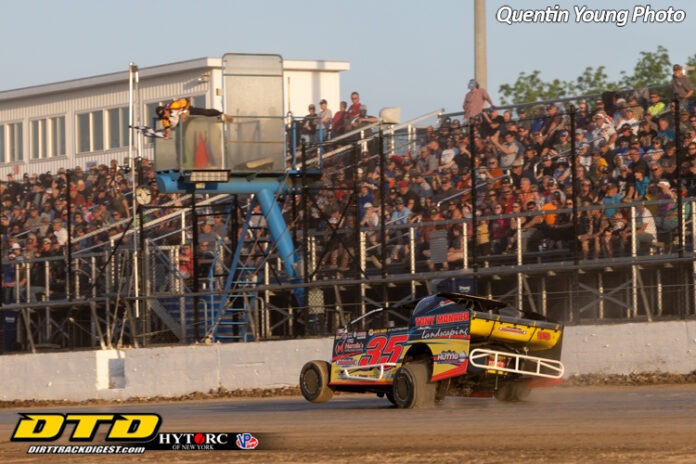 The world is a bit different for Mike Mahaney.

No longer does he have to follow the Super DIRTcar Series as he isn’t allowed to be a Platinum driver at this time as he departed the tour last year to seek the fortunes offered at an STSS Fonda show that paid $50,000 to win.

On Sunday night he had one of those nights as he said, “We were fast time in time trials, ran well in our heat and really were able to move forward in the 100 lapper. I really thought tonight we were going to get the win.”

The feature didn’t start the way he had hoped as he had drawn 10th starting spot.

He said, “It was unfortunate we drew 10th as that meant starting on the outside and the inside would have been better. In the feature I found something on the bottom and moved up well. Who would have ever thought 95 laps without a caution.”

Looking back Mike noted, “I fell back to 14th at the beginning and in the end I feel I was closing at the end.”

A year ago at Malta, Stewart Friesen and Mahaney battled wheel to wheel as Mike picked up his first SDS victory.

He had hoped, as the race unfolded on Sunday, that might be a possibility once again. However, with the yellow remaining in Dave Farney’s holster the confrontation never materialized.

Continuing, he explained, “It’s a heads up start and it provides different racing. It is the game you play as you really can’t control things.”

He wasn’t disappointed as his team has had a mix of luck in the early part of the season.

Mike said, “It was big for our team and for me. This is really my hometown track and I got my first big-block win here.”

Looking at the season he explained, “I think we just overthought things. We made a huge effort in the offseason to get ready for this season. We have rethought our process and gone back to the basics. We are getting better every race.”

So while the Platinum teams are bound for Lebanon Valley for the Memorial Day event, Mike said, “We will be spending the day by Cayuga Lake and having a fun time.”

Such is the life of an “outlaw” Modified driver.