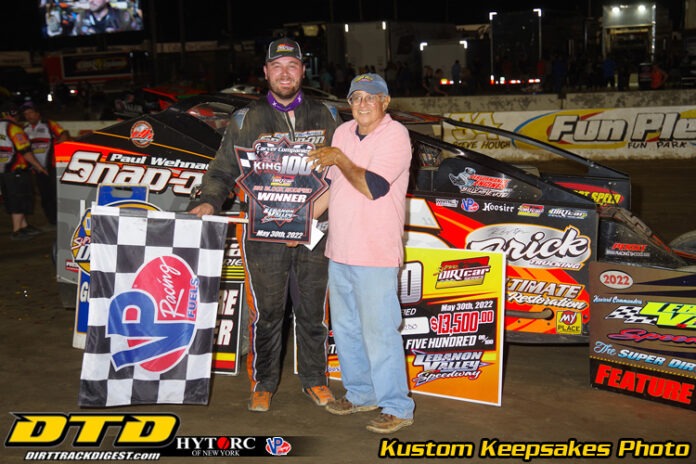 Disneyland is known as the place ‘Where Dreams Come True,’ but on Monday night Lebanon Valley Speedway took up that moniker for Modified track regular L.J. Lombardo.

Lombardo has dreamed since he was a small child sitting in the stands at the Orange County Fair Speedway of winning a Super DIRTcar Series race.  That dream became reality Monday night in the King of Spring 100 for Lombardo as he scored a hefty $13,500 payday, but more importantly, his first career series triumph.

“This is truly a dream come true,” stated a still pumped up Lombardo after the win.  “I used to sit in the stands at Middletown back in the day and watch Brett Hearn win all those Super DIRT(car) Series races. I have always wanted to get one since I was about three years old.  It is absolutely a dream come true.

“It’s tough because we run so well here in weekly shows, but when they come in (Super DIRTcar Series), nothing ever seems to fall in line.  It all worked out tonight.  Everything seemed to fall in line today. This is something I’m going to think about for the rest of my life.”

Lombardo started in the second spot with his PMC chassis, Billy the Kid Engines powered No. 35 for the 100-lap main-event.  He fell back at the start as pole-sitter Peter Britten took control.  He wrestled the lead from Britten on lap 18 only to have Andy Bachetti take advantage of a restart on lap 31 to go by.

From there, Lombardo fell in line behind Bachetti trying to conserve his right rear Hoosier Tire for a run later in the race.  He was hoping to start mounting that challenge with a third of the race still at hand.

“I was riding there a bit,” commented Lombardo.  “I started to catch him a little bit around lap 65 or 70.  I thought, ‘If I wait until lap 90 our stuff is going to be used up so I better try now.  If I can get ahead of him I could try to hold him off like he was with me.’  I think he was toying with me a little bit on the backstretch.  You have to save your tire and that’s all part of it.  I saw his tire was chunking up a little bit on one of the last restarts so I thought I might have a chance.”

His chance inevitably arrived on lap 73 when Bachetti slowed and stopped on the frontstretch with mechanical issues.  This handed Lombardo the lead.

“It’s unfortunate for him,” Lombardo stated of Bachetti.  “You never want to see that no matter who it is.  You want to pass these guys to beat them.  When he stopped I thought he was trying to tell the officials something.  I didn’t realize something broke.  Then I saw them show the push symbol and I immediately started to think to myself who is in second and going to pass me next.”

The next man that attempted to challenge him was Marc Johnson.  Johnson made a run on a couple of late restarts only for Lombardo to close the door.

The field got one last shot at Lombardo with 92 laps showing complete when Matt Sheppard blew a right rear tire running in the top five.  Rather than being upset that the field was going to close up on him again, Lombardo was happy to see the yellow lights on even though the laps weren’t counting.

“Believe it not, I was happy,” cited Lombardo.  “My brakes were overheating.  The caution came out at the perfect time because it cooled them down again.  I don’t know who was looking over me, but everything was laid out perfectly.”

Monday’s win not only helped a dream come true, but also helped solidify Lombardo’s decision to become a full-time racer.  He runs in both the big and small-block division on Saturday nights at the fast half-mile to allow him to earn a living.

“I quit my job to come to do this,” he said.  “It is so cutthroat.  You can have a bad week and a good week and then be in a slump.  It’s just good that we are running so well here.  Running two cars weekly has really helped get us to this point.  You learn so much more.  I wish more people would do it and fill the fields back up.  I know it’s grueling to do it.  I’m 26-years-old. I said in victory lane that the average age of the crew guys on our team is 25.24 years old.  Anyone can go out and do this.  You just have to have heart and work hard.  That is all it is.”

Lombardo thanked his sponsors StopTech Racing, Precision Hydraulic and Oil as well as owner Paul Wehnau and Snap on Tools.

“This guy gave me everything I needed to do this,” said Lombardo.  “He trusts me.  I think he’s been to the shop once since I started racing for him.  It’s a blessing to drive for him.  I owe this all to him, my father and everyone else who helped us get to this point.”

So on Tuesday morning there was no need for Lombardo to pinch himself, yes Monday night wasn’t a dream, but reality.