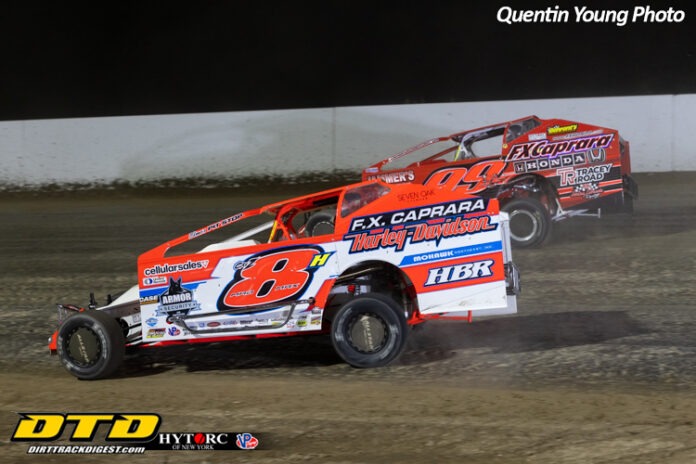 The “Outlaws” came early and in a completely different form at Weedsport’s “Remember the Heroes 100.”

Only one Super DIRTcar Series Platinum driver finished in the top five as winner Stewart Friesen doesn’t hold Platinum status and neither do Mike Mahaney, Erick Rudolph or Larry Wight.

The only Platinum driver was Matt Sheppard.

It was a “new” Weedsport Speedway as Jeremie Corcoran got the track set for the new year and it provided a variety of racing.

Larry Wight, who has done his share of track prep over the years, stood in his hauler charting down notes after his fifth place finish.

He said, “The track was hard and I think they just didn’t want to put down a lot of water so that it would break up. I wish they had decided to run one of their 30 lap midweek or Sunday specials to try to get some laps on it, but it stayed together.”

Of his experience he noted, “I was better between one and two while three and four was a crapshoot as you could run bottom, middle or top.”

Seventeen-year-old Alex Yankowski is chasing the tour for the first time and he came home 18th one lap off the pace.

Before heading out to timed hot laps he said, “This is a big learning curve and it is nice to have the time trial format. I was 19th at Can Am and had my butt kicked big time. There will be a few of those as I just have to be patient, put my nose to the grindstone and keep on digging.”

He credits Kevin Bates with much of his success as they have been together for quite some time. Kevin started out in racing under the wing of Alan Johnson and developed into a highly competitive driver. He now had taken Yankowski under his wing.

Mad Max Gets a Run

Max McLaughlin continues to impress in the HBR stable ride.

He started 16th and by the end of lap one was 12th. He systematically picked off cars and by the 53rd lap was sixth. However, at about that time the positions were pretty well locked.  Max came home sixth in the end.

Many times how the field looks at lap 50 is quite similar to the final rundown.

At the 50 lap mark Friesen was comfortably in front while Rudolph, Sheppard, Wight and Mahaney followed.

The biggest move was Mahaney who got fourth on 61, third on 66 and second with just 13 laps to go as he started the pass on Rudolph in turn one, but didn’t complete the pass until the fourth turn.

Group time trials determine the heat line up and usually that has a strong determination on the qualifying for the main-event.

Heat two winner Ron Davis III and Gary Lindberg put on a show as Davis stayed up top all race long and the duo raced side-by-side from their front row.  Marc Johson was third while fifth place starter got past Darren Smith on the last lap as the first, second, third and fifth place starters qualified.

Wight and Sheppard started on the front row and finished that way while the second row of Mat Williamson and Tim Sears Jr. came home in third and fourth.

The fourth heat proved to be the most unique as Jimmy Phelps started outside the front row alongside Adam Pierson as they were one-two. Fifth place starter McLaughlin finished third and Jack Lehner had the biggest run in any heat as he went from seventh to fourth.

CSRA had their first show of the year as Billy VanInwegen started back in the field and from the very beginning the chase was on. Darryl Ruggles and Bobby Parrow were battling at the front of the field and Billy V simply wouldn’t come off the top. He used the wider turn four exit to build momentum and when the caught the top two it was showtime. Billy V chalked up his first CSRA win in spectacular fashion….

Cody McPherson decided midweek to come to Weedsport after Humberstone decided not to run. It paid off with a three-tenths of a second win over Matt Janczuk ….

Racing started a little after 7 but it was efficiently run…

CSRA started out rough but the feature was spectacular…Huge crowd…

Lori Corcoran spent her birthday in the pits watching son Tyler grab a heat win just feet before the finish line and watched as her husband Jeremie groomed the track.