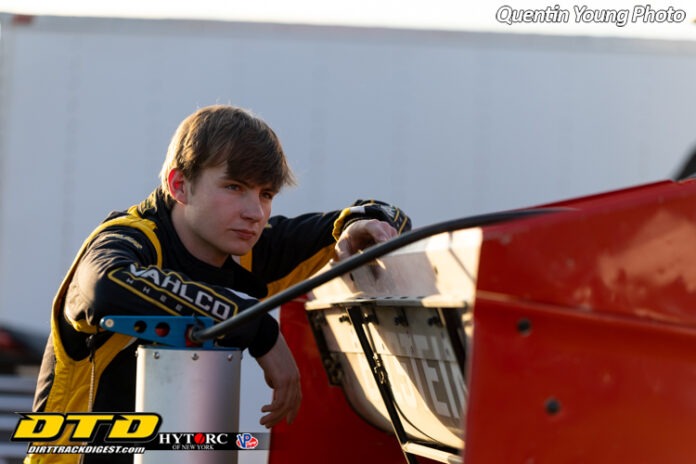 Monday night’s Super DIRTcar Series event at the Lebanon Valley Speedway afforded both Alex Yankowski and Mike Gular their first ever opportunities to turn laps at the half-mile, high-banked facility.

This came a day after they both made their debuts at the Weedsport Speedway.  Neither driver found the results they were looking for during their two day foray into New York, but each gained the notes and experience that will prove valuable in the future.

“It’s tough,” stated Yankowski when asked about his trip.  “Really, that is the whole reason we did this.  We didn’t think we were going to get any better running the schedule we were.  That’s it.  We know we are going to go through some growing pains and struggle.  It’s going to be a tough year.  It might not be the best stats year, but in the notebook it is probably going to be the best year yet.” 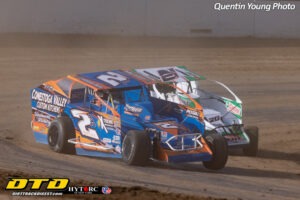 Gular echoed those sentiments when asked about his trip as well.

“Any time you go to all these different tracks it helps,” commented Gular.  “It helps in the seat, setup, everything.  That is kind of why we are doing it.  If we had unloaded at Weedsport with what we had at the end of the night we would have been better.  Once we get some notes we will be better.  We are going to struggle until we get some notes at places.  Randy (Williamson) from Bicknell has been a big help.  A lot of guys we race with have been a big help, but you still have to figure it out on your own.  Slowly but surely we are building a notebook.”

Lebanon Valley is much different than anything either driver had experienced in their travels.  Both drivers improved as the night went with Yankowsking finishing 10th and Gular crossing the line 15th.

“It’s pretty unique,” stated Yankowski.  “I was pretty frustrated after the heat race, but when the track slows down it gets to be good racing.  Honestly, after the last couple of nights, I’ll take this as a win.  I’m just trying to get experience on the DIRT(car) deal with the Series.  Kevin Bates did a hell of a job all weekend.  I don’t care what the numbers say, he and I are learning a lot.  It just makes me more excited about the future.”

Gular added, “This place is harder than I thought it was going to be.  I’ve run a lot of places and this place is intense.  You are on the wheel.  I don’t care how long the straightaways are, your car isn’t even straight on the straightaways.  Guys are darting all over the place.  This isn’t the run we wanted, but we made 100 laps.”

Yankowski summed up the weekend feeling like he accomplished something and that’s what really mattered.

“It all played out well,” he said.  “To get a top 10 against these guys is big.  The crew did a good job all weekend.  It’s been a long weekend, a tough weekend and it’s been a little bit miserable at times for me.  I got spoiled a little bit after Charlotte and some big wins.  Reality has to kick in and I just have to figure it out.”

Surely both drivers will figure it out as they continue to grow the Super DIRTcar Series notebooks.