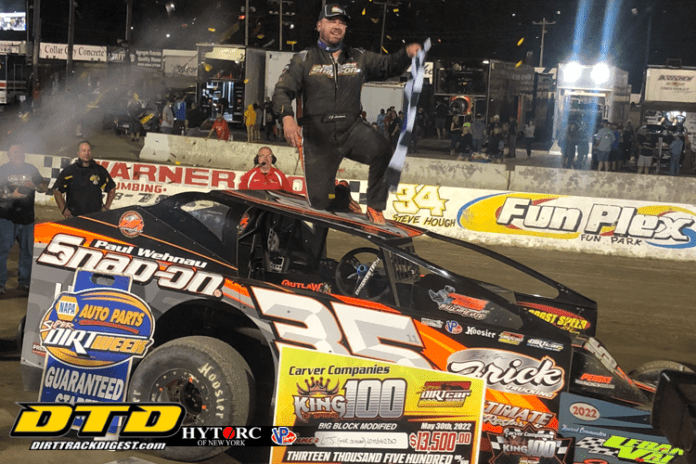 Fonda’s Limited Sportsman division has attached a variety of competitors looking for a starting point for open wheel racing.  This season the division has produced several first time winners and a different winner each week until this past Saturday when Zach Dufel became the first to double up. 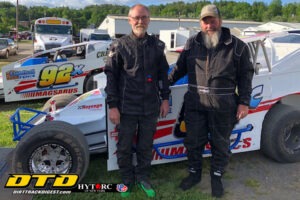 The two car team of Lance Hill of Seward, N.Y., and Mark Lighthall of Sharon began their time in the division last year on an occasional basis.  This year both drivers are racing at Fonda and are looking at traveling to some of the other tracks in the area.

Hill drives the No. 92c, a 2009 Bicknell, and has already stood on checkerboard square at Fonda this season.  He said, “That was amazing.  Everything was just right and I thought when I looked at the lap counter, I could win this.”  It was a first time win for the 56-year-old that just began his racing career a year ago.

Lance is owner of Cobleskill Collision and says without it and the other dedicated sponsors he wouldn’t be racing.  Other sponsors on the car are D&R Paving, Crewell Property Mgmt., Lighthall Fence, Don’s Painting, and MagsRus.  Rich Slater, R.J. Slater, Dave Scott and Artie Klopman all help as crew on both cars.  Lance says he would move up when he is comfortable and can upgrade to a newer car.

Mark Lighthall is a familiar name to many of the more seasoned fans at Fonda, he was a Pro Stock racer at the track for nearly 17 years and has been out of racing for nearly the same amount of time.  Lighthall chauffeurs the No. 92x Limited Sportsman, another Bicknell chassis and says it was Lance Hill that gave him the idea to come back to racing after all these years.  Of course the open wheel car is all new to Lighthall but on Saturday night he had things hooked up and won his heat event and was scheduled to start the feature on the pole.  However, Lance was involved in an incident in his heat event and Mark and the crew made the decision that he should race his car for the points.  Lighthall has missed a couple weeks this season so Lance took the No. 92x started in the rear and finished seventh. 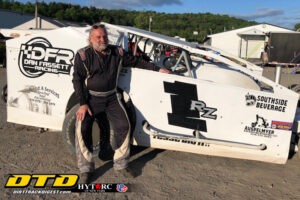 If you’ve been a fan at Fonda for many years you are familiar with the plain white No. 1z, now the 1RZ of Ray Zemken.  According to Ray, he’s been racing, on and off, for 45 years, beginning his career in Late Models at Fonda.  His next step was into 320 Mods and then to Sportsman.  Ray also traveled to other tracks to race, CanAm, Evans Mills and Utica-Rome to race but always returned to Fonda.  When asked if he has thought about retiring, Ray said, yes I’ve thought about it but Kevin and Daniel Fassett put this car together for me this season and asked me to drive it so here I am.  Ray has seven 602 Sportsman wins and three Open Sportsman wins at Fonda.  He has four Sportsman wins at Glen Ridge and two Modified wins.  At Utica-Rome his wins are seven in the Sportsman division. 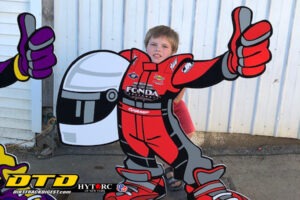 A very interesting and fun addition near the Kid’s Club area at Fonda are two stand in photo cutouts where kids (or anyone) can have their photos taken.  Kid’s Club manager, Ashley Abeling said that the adults seen to enjoy them as much as the kids.

We captured one of the many kids that tried the cutout on Saturday.  9-year-old, Greyson Hough of Ballston Lake posed for us as a Fonda Champ.

The Super DIRTcar Series was at Lebanon Valley Speedway on Monday and a Valley regular, and a transplant from Orange County, L. J. Lombardo of Danbury Conn., took advantage of the misfortune of leader Andy Bachetti of Sheffield, Mass., when Bachetti broke under yellow on the front stretch.  With 30 laps remaining of the 100-lap event Lombardo held off Marc Johnson of Guilderland to win his first career Super DIRTcar Series race.

While at OCFS Lombardo won six Sportsman features and the Sportsman Championship in 2014.  He move to Modifieds and won three features before making his new home at Lebanon Valley.  Since 2017 L. J. have nine Modified wins and two 358 Mod wins.  It should be no surprise that he would claim one of Lebanon Valley’s major events, just as two other transplants, Brett Hearn and Andy Bachetti, did when they moved to the Valley as regulars. 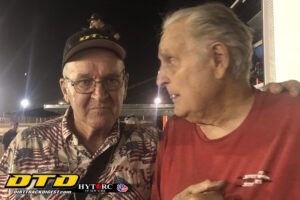 Ken “Abe” Tremont celebrated his 84th birthday on May 31st.  Ken’s life has been racing, ever since he sold soda at Burden Lake Speedway at age nine and built his first car for a soap box derby.  As a car owner, Ken has had some 20 different drivers chauffeur his No. 115’s, recording nearly 400 wins as an owner and never mentions the word retirement.   Happy Birthday, Ken!!