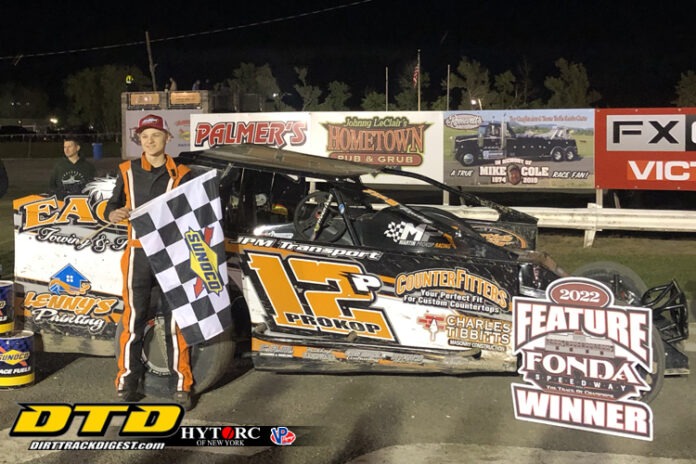 Connor Prokop began racing go-karts at the age of seven and ran a couple times at Fonda last year sharing a car with teammate, Seth Martin.  He began his first full year of racing in the Limited Sportsman division at Fonda this season.  On May 1, he finished second to first time winner, Lance Hill and got a taste of being up front.  On Saturday Connor led the 15-lap feature from green to checker to record his first win at Fonda and give his dad a big birthday gift.

When we stopped to talk with the team prior to hot laps, his dad said we’ve had mechanical issues the past three weeks but hopefully tonight will be better, he really wants a win.  His teammate, Seth Martin had won for the second time the night before at Utica-Rome where he races regularly and got his first win in the division on April 29. 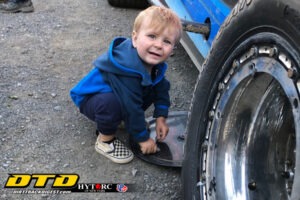 Demetrios Drellos has a very cute new crew member this season, his son Paxton, who is very serious about his work with the nuts and bolts on the No. 111 Modified.  His dad has had a successful start to his season and says he has changed his way of thinking when he goes to the track.  Consistency is his goal this season, and he is not just concentrating on the win but on his finishes and so far it seems to be working.  He currently sits third in points at both Albany-Saratoga and Fonda.

We are always interested in fans at Fonda, especially those who are the Fonda Faithful and Bill and Cate VanSteenburg of Cobleskill fit the bill to a tee.  Bill has been a race fan since the age of three when his parents brought him to Fonda.  He still has his first Jack Johnson 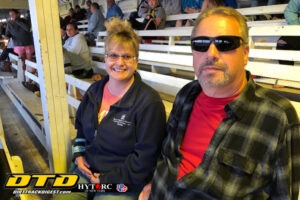 shirt, a tiny one for a three-year-old.  Bill grew up around racing, his Uncle Jim Lighthall and cousin, Mark raced and recently returned.  His father drove truck for Hauser Brothers, the sponsor on C. D. Coville’s No. 61 for many years.  Cate became a race fan when she met Bill and together they have traveled to many different tracks around the area.  They even traveled to Delaware on one occasion hoping to see something different, and instead they saw a familiar face, Stewart Friesen, in victory lane.   For much of their time at Fonda, they sat in the first turn, on the patio area but recently moved to the covered grandstand behind the flagger for a different view.  Their favorite drivers at Fonda are the Varin’s Bobby and Danny.

There have been 17 different heat race winners in the 602 Sportsman division at Fonda this season and we know this because Fonda’s dedicated statistician, Ron Szczerba, documents each one week after week and announcer, Chris Moore gives the information to the crowd.  It’s something that we appreciate because with Ed’s interested in racing history and the numbers, we know what it takes to compile the  info each week. 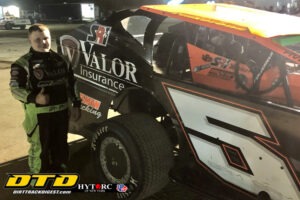 We first heard the name, Brock Pinkerous in the Jr Slingshots at Glen Ridge where he posted 13 wins, his first on 7/1/18 and his most recent on 5/23/21.  He was champion in the division in 2019.  In 2020 he raced once in the All-Star Slingshots at The Ridge and won.  Prior to our seeing him at Glen Ridge, his Slingshot racing career that began when he was six-years-old took him to many tracks in Pennsylvania following the Tobias Slingshot Circuit where he gained his racing prowess and ability to handle an interview at the age of 12.

This season he moved to Sportsman and has already picked up a win at Albany-Saratoga and gained himself a nickname; BamBam which comes from how hard he hit when he played football.  The number 5P on his PMC Chassis Sportsman also connects to his football jersey, number 55.  This Sunday, Brock expects to race in the Super DIRTcar Series 358 Modified event at Glen Ridge with his new Bicknell chassis. 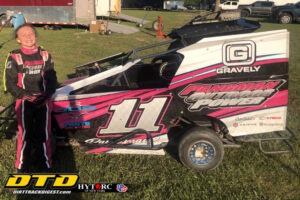 Izzy Pangman a 9-year-old racing in the JR Slingshots at Glen Ridge for her fourth time, is a third grader at Cobleskill-Richmondville Elementary School.  She has never raced anything prior to coming to Glen Ridge but she has seen her dad, Shaun Pangman, race many times.  Shaun quit racing a few years ago and says when Izzy became interested he decided on starting her in a Slingshot because they are a safe option, with a full containment seat and five-point seat belt.  Izzy is already looking at the future when she can race at Fonda and beat Jessica Friesen.  Behind the wheel for only her fourth time out, Izzy drove a steady line around the fast Glen Ridge oval. 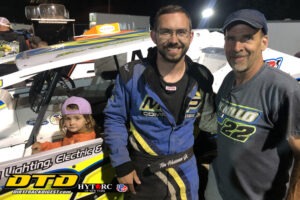 Friday evening we made sure to talk with Tim Hartman, Sr., regarding his trip to the Indy 500.  Tim said it had been on his bucket list for a long time and at 60-years-old he jumped at the chance to go for his birthday, a gift from Tim, Jr., who surprised him with the tickets.  Both Tim, Sr., and Jr. said they would jump at the chance to do it again.