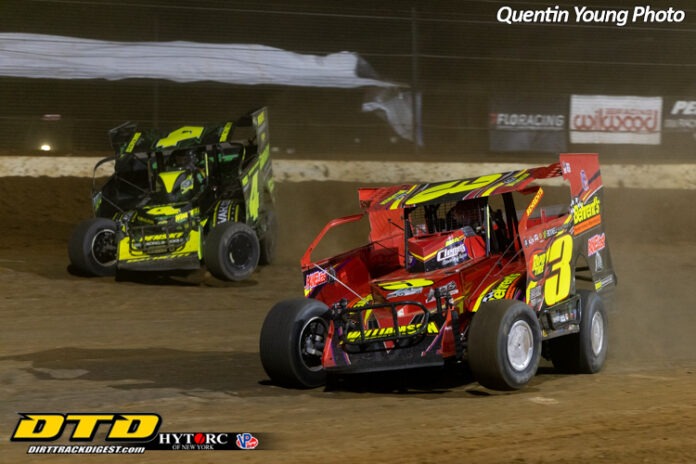 BLOOMSBURG, PA – At least a few cars arrived late to the Bloomsburg Fair Raceway after major backups on I-80 west about a half hour out of Bloomsburg. To my knowledge, most of those caught in the traffic were Sportsman cars. There were no such traffic issues for those headed home afterwards.

As referenced in a previous article, more banking was added to the top of the Bloomsburg Fair Raceway this year. They’ve struggled with the surface this year, but it was pretty good for the Modified race. I was glad to see the track finally make some significant progress on that front, especially after heavy rain on Tuesday. This is a neat facility, and I hope that Modifieds and racing in general can continue here.

At the Outlaw Showdown, I said that a youth movement was well underway in Modified racing. Tanner VanDoren continued that movement tonight. Left front suspension and steering problems after a restart accordion ended TVD’s night, but he was impressively quick for having a spec small block and only a year of Modified experience.

Where were the Pennsylvania cars? I was pretty surprised to not see Rick Laubach, Duane Howard, Craig VonDohren, Jared Umbenhauer, and some other Pennsylvania Modified stars at the event. With the rain date being used, I understand teams not wanting to race Wednesday, and have to at minimum do maintenance Thursday to race Friday or at worst fix a damaged car for Friday.

Stewart Friesen, David Schilling, Billy Decker, and Darren Smith most notable Short Track Super Series absentees. Schilling went up in smoke at Utica-Rome last Friday; that is never a good thing. Friesen has a truck series race this weekend in California. Jeremy Smith Racing has been strong on the tour all year long with Decker, but Smith has also snuck in some good runs when he hasn’t been struck by awful luck. Hopefully these guys can make it back to some tour races soon.