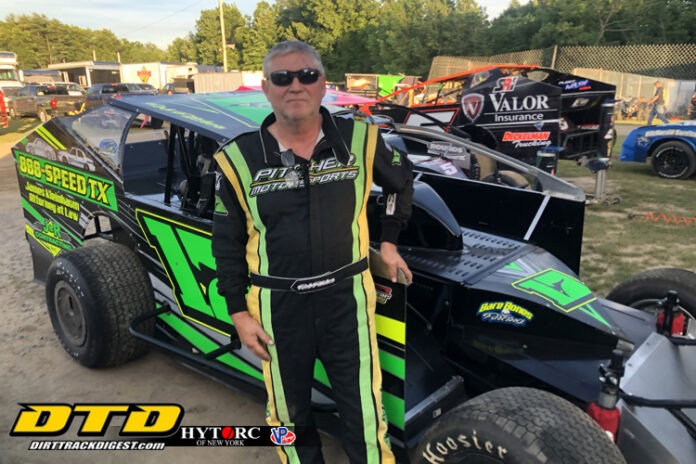 Friday night at Albany-Saratoga we spoke with Rob Pitcher.  Rob has been racing for 36 years, first in Pro Stocks, then moving to small blocks and then to Modifieds, a career that was spent predominately on the high banks of Lebanon Valley where he has eight Modified wins and one small block win.  This season Rob is racing at Malta and expects to finish out the season there and he hopes to get back to the Valley by the end of July or early August.  Rob says he loves the competition at Malta, “You have 15 to 20 drivers that could win on a given night.”

One highlight of Rob’s season was racing at Volusia Speedway Park in Florida and coming home with one of the coveted Gator trophies for his win in a UMP Modified.  He’s still smiling whenever he sees the Gator trophy on his shelf at home and thanks his brother, Jim and friend, Demetrios Drellos for help with the car.   Rob is working toward his retirement so his racing has slowed down as he has other things to concentrate on. 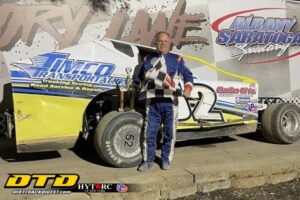 Ron Proctor recorded his first Sportsman win at Albany-Saratoga on Friday, just one day after he celebrated his 69th birthday.  Proctor has 14 career Modified wins at the Great Race Place, four on asphalt and 10 on dirt, his first win coming in 1986.  Keith Flach was the winner in the Modified division over Matt DeLorenzo.  It was Flach’s sixth win at Malta.

Billy Decker was the Modified winner at Utica-Rome on Friday night, his first win at the track since June 24, 2015.  The Franklin Flyer has seven career wins at the track.

We did not get to the races at Fonda on Saturday, we attended our granddaughter’s recital at Proctor’s but we always know we can depend on reports from Fonda and watching the replay on Flo the next morning.

Saturday evening was Bill Lake Modular Homes, fan appreciation night at Fonda Speedway, and one of Brett Deyo’s $5.00 general grandstand admission deals and a meet and greet with drivers.

For Craig Hanson it was his second victory of the season and it was on his sponsor’s night, making it that much sweeter.  When we watched the replay on Sunday morning we heard Craig say in his victory lane interview that he had found something in a new motor. 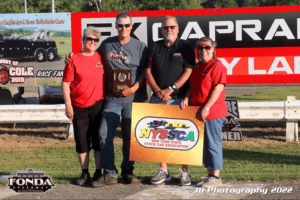 Prior to opening ceremonies NYSSCA handed out special awards.  Rocky Warner and Ronnie Johnson received the 2021 NYSSCA Outstanding Performance Award as the first ever Modified division co-champions in the 70-year history of the Fonda Speedway.  Also winning a 2021 NYSSCA Outstanding Performance Award was Jessica Friesen for her win on July 10, 2021, as the first woman to ever win a Modified feature at the track.

NYSSCA handed out two 2021 Dedication to Racing Awards to Craig Hanson and Cliff Haslun. Hanson runs the family business, Hanson Paving, runs the grader and does track prep at Fonda during the week and on race nights, races his self-owned No.20C Modified, and assists as a Short Track Super Series Official when time allows. Hanson has a career total of eight Modified wins at Fonda, the first one coming on 7/30/2005 and his most recent on Saturday night.

Cliff Haslun has always been a driver who does what he can with what he has.  It might be his self-owned #13 Street Stock or the Dennis Joslin owned Pro Stock, making a lot of parts for the race car himself and getting to the track in any way possible.  This makes him a great candidate for the NYSSCA Dedication to Racing Award. Haslun has a total of five Street Stock victories at Fonda. 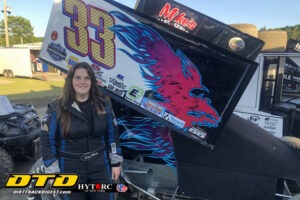 When the ESS Sprints raced at Albany-Saratoga a week ago, we talked with Lacey Hanson from Orwell, Vt.  When not racing and to help support racing efforts, Lacey is a product engineer at Hubbardton Forge and currently is traveling with the ESS from track to track.  Sponsors on her No. 33 are Carl Durfee Clothing Store and Whitt’s Auto.  Her pit crew consist of her mom, Jane and dad, Dean.  Her favorite tracks are Albany-Saratoga and Granby.

After talking with Lacey, we found that although she was not one to talk about her accomplishments, this young lady had actually done quite a bit of racing in her career has had several wins at multiply tracks.  She raced Mini Sprints with the Sprint Cars of New England (SCONE) and has had wins at Bear Ridge, Devil’s Bowl, and Legion Raceway.  On September 9, 2016, at Devil’s Bowl she became the first female to win a SCONE event.  This past Saturday, June 11 she recorded her career best finish with the ESS, a ninth place finish at Genesee Speedway in Western New York.

When the ESS canceled their 2020 season due to COVID, Lacey tried her talent behind the wheel of a Limited Sportsman at Devil’s Bowl.  It was quite a season for the rookie, she had one win, seven top fives and ten top tens.