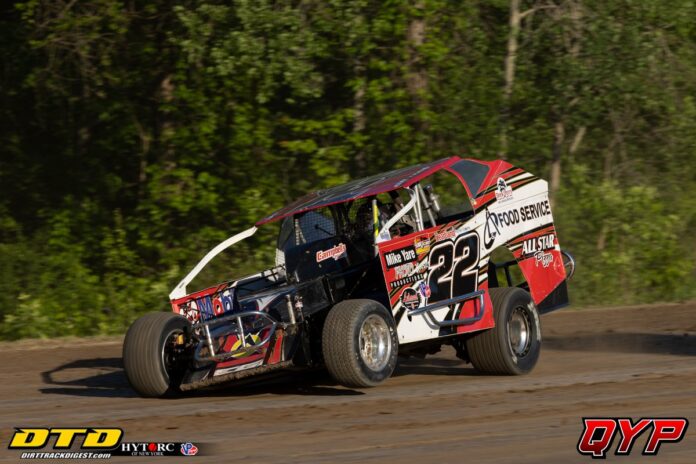 Last week at Brewerton Speedway Gil Tegg suffered through something that every driver dreads.  His No. 22 was cradled off the speedway after a hard hit.  It was by far the low point of the season for the soon to be 51-year-old driver.

The team worked hard all week in the shop repairing his Bicknell for action on Friday night.  The hard work immediately paid dividends as the Rochester, N.Y., driver was able to have a career best finish on Friday night when he led a good portion of the race before getting passed by Larry Wight late to finish in second.

“We needed it after last week,” said a smiling Tegg.  “We got cradled off the track last week after a pretty good wreck. We thrashed on the car all week.  This is a car we switched over about three weeks ago, we thrashed on it back then so we’ve been working non-stop on this thing.  Our Canandaigua car isn’t much better, issues with the brakes, but we think we figured that one out this morning while working on it.  Hopefully we’ll come back tomorrow night and have a good run there too.”

Tegg’s car was on point Friday night.  He could utilize any lane on the speedway.  He wrestled the lead away from Andy Noto on lap 12 and led until a lap 25 restart when Wight went on by him on the outside of the speedway.

“My car, I could go anywhere with it,” he said.  “The top, bottom or through the middle.  Before Larry got me, I was going into turn three three-quarters of the way up and driving back across the track.  In one and two I was easing in in the middle and letting the car drift up.  I don’t know, maybe I could have run the top all the way around and held him off.  Just to have a good run after the season we had here so far felt good.”

Friday night’s racing surface fit into Tegg’s profile.  He loves a hard and slick track, unlike the one that teams competed on one week prior where it was filled with bite.  Slower was faster on the traditional Brewerton slick.  It’s the slickest it’s been all season to date.

“The track was real racey (early in the season), probably too fast for what I like,” commented Tegg. “Tonight, it was right in my wheelhouse.  It was nice and slippery, smooth and the car handled like a dream.”

Tegg was a regular at Brewerton Speedway back in the early 2000’s before switching to Ransomville Speedway.  He elected to come back to Brewerton last year and remained for the 2022 campaign.

“We were struggling there (Ransomville),” cited Tegg.  “There is a tough field of cars there.  The money was a little better here and it wasn’t that much further.  It’s probably a 15 minute longer drive and a little racier.  Ransomville has always been a tough track for me.  I always like going there, but the results, I didn’t come up with real good runs there.”

Tegg hopes this is a sign of better things to come as the team hopes to turn the corner for continued success at Brewerton and his Saturday night home Land of Legends Raceway.

If there is a high-side at any track that Larry Wight competes at, every knows he’ll find it.  That was the case Friday as Wight road the high-line to his second Brewerton Speedway victory of 2022.  While everyone else was trying to navigate the bottom and middle of the track, Wight planted his No. 99L on the top edge all the way around the third-mile.  It paid off with a win.

“I saw them put water up there when we went for the autograph session,” commented Wight.  “I knew the Mod-Lites weren’t going to run up there.  It’s just too far around for them.  The first couple of laps everyone was fighting for the bottom and left the top open.  There was just enough grip that I was able to get by six cars really quick.  I didn’t see it going anywhere so I was able to stay up there the whole race.”

Wight, like Tegg, feels like he’s turned a corner with his car.  The car felt the best it has all season long Friday.

“The car was spot on,” he said.  “I think we finally got it back to where it was at the beginning of the year.  It’s the same chassis we’ve been running all year, but we were missing something.  We were always just a little too loose.  I finally got the tightness back to it.  Hopefully it keeps going and this wasn’t a fluke.”

Wight had a great battle going with Tegg in traffic before a lap 25 caution.  Wight worked mostly high, but was able to go low and through the middle when he had to as he tried to navigate through the slower cars while closing the gap to get by Tegg.

“He definitely wasn’t going to let me by easy,” Wight said of the battle with Tegg.  “He raced me hard, but he raced me clean.  We never touched or anything.  We got damn close a couple times.  I’ve always been able to race with Gil no problem whether it’s here or Canandaigua.  It was good to see him running well, especially after last week when his car got cradled.  It’s one of them deals where sometimes after wreck like that your car is better.  Hopefully he’s all good there.  We really enjoy seeing him here.”

Last Saturday night Wight elected to forgo big-block competition to run at Fulton Speedway.  In chatting with Wight it looks like that is going to be the plan moving forward after he competed at Orange County Fair Speedway to start the season and more recently at Land of Legends Raceway on Saturday nights.

“We are just floating around right now, but I’ll probably finish year out at Fulton,” commented Wight.  “We were thinking about doing Orange County deal, but after they changed the rules once I’m nervous if they are going to change the rules again.  It’s 800 dollars in fuel just to go down and back with the truck.  That big payday is great to get it, but if you look at the law of averages of actually getting the extra money, it’s tough.  Right now it’s just me and Ryan Dolbear working on the car and Brooke and the girls help with washing the car.  To do that and work all week, I just think we are better off staying at Fulton.  It’s a mile down the road, plus we can run the Sprint Car there too.”

Tim Sears has been the dominant force in Central New York to start the 2022 campaign.  Friday night he was in the mix as he advanced from 14th to third.  Unlike Wight, he wasn’t able to get bunches of cars at a time making it a grind to get to the front of the field.

“He (Wight) started right in front of me,” stated Sears.  “He got through traffic pretty good.  He was second and I was still 10th.  He just got a really good jump on us.  We just couldn’t get through traffic as good.  You had to catch guys at the right time to be able to get a run on them to get by.  You couldn’t out motor anyone on that.  It was hard fought.  It was a tough race track.  Takes too long pass so it makes it tough to get to the front.”

Only two cautions slowed the 35-lap feature for minor incidents…