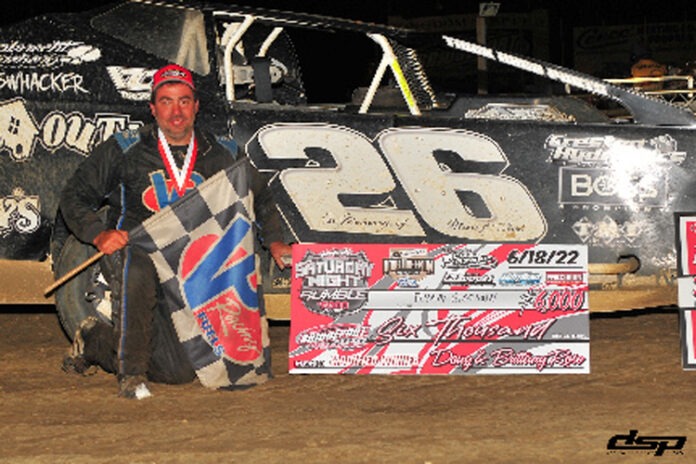 When it comes to dirt racing, what is it the most that we all want to see? The answer is obvious, side by side racing and non-stop action. There is a reason why most people consider USAC Midget and USAC Wingless sprint racing some of the best racing you can watch. Constant action with slide jobs, three and four wide racing throughout the field. If that’s what you are looking for, then Bridgeport Motorsports Park is the place to be.

Any division that takes to the track at Bridgeport Motorsports Park offers the same exciting brand of racing from the street stocks to the mighty Modifieds. It is exciting and intense to say the least.

If anyone knows me, I am old school and loved the Bridgeport 5/8’s mile track. The roar of those big-block Modifieds would make the hair on your arms stand up and there were some outstanding races put on by some of the best drivers modified racing had to offer but the racing on the new 4/10’s high banked oval is like that every lap. It might not always be for the lead, but you can bet somewhere in the field that drivers are going at three and four wide with slide jobs aplenty.

I understand that this style of racing does not appeal to everyone especially some of the dyed in the wool 5/8’s diehards and that of course is their prerogative. But no one can deny that the racing at Bridgeport Motorsports Park has made the fans take notice of what these drivers are capable of. The first year in 2020 made you hold your breath on occasion as the competitors sliced and diced over the wide surface and wrecks were more commonplace but as the drivers learned how to drive the new track layout, the yellow flags diminished greatly as witnessed last season with the amount of feature events that went green to checkered with no yellows.

One driver who has mastered the new layout is Ryan Godown. In 2020, the first year of the new track configuration, Godown won three races. Last season was Godown’s breakout season at BMP when he won a total of nine races along with the 2021 track championship. In 2022 Godown picked up right where he left off at BMP, so far this season the “Ringoes Rocket ” has won five feature events at BMP including his first Super DIRTcar Series win. Due to some unfortunate bad luck including a hard crash on opening night, Godown currently sits second in points trailing Billy Pauch Jr.

This past Saturday night, track promoter Doug Rose had scheduled one of the two “Rumble Races” which doubled as the “Doug Hoffman Memorial Race” which was postponed from March. Godown wasted little time showing the field that he was the driver to beat as he blasted through the field to take the lead from Dominick Buffalino on lap 22 when Buffalino hit a hole causing his No. 126 to bounce hard allowing Godown to scoot by. Once in front, it was all Godown as soared to victory in the 40-lap main event to return to BMP victory lane after a couple of weeks that saw Godown encounter some troubles.

“Two weeks ago we got clipped on the quarter panel and the body was rubbing the right rear tire and sometimes that is going to happen,” said Godown as his crew was loading the No. 26 modified back into the hauler. “Last week we got a pinhole in the tire and had to come off and change it but you know we have been so good and perfect here that sooner or later luck would not go our way, but you just have to keep your head down and don’t panic and just keep doing what we do and go from there.”

It was a different kind of Saturday for Godown who instead of working on his car during the early part of the day attended his daughter Savannah’s dance recital which is something very new for Godown as a father of a young girl.

“It is very different being a dad of a girl,” said the jovial Godown. “I can tell you what, little girls are very different from little boys. I can’t tell you how many times she said Happy Birthday to me and I love in the last week. I don’t know, maybe it is because I am older now and had Ryan (Godown Jr.) when I was much younger, but you learn to appreciate it more and you never know what can happen tomorrow. It’s been a good week for sure with Ryan Jr’s birthday, my birthday and Savannah’s dance recital and getting the win tonight, it will definitely be a good Father’s Day tomorrow.”

The only worry for Godown after he took the lead from Buffalino was lapped traffic. As the leaders would run up on the back of the field Buffalino would be able to cut the distance between himself and the leader. Godown patiently worked the lapped cars and was able to use them to his advantage to widen his lead over a very fast Buffalino.

“They were getting the move over flag, but they just didn’t move over,” commented Godown. “As long as they hold their lane, you can slide them but I kind of had to wait on a couple of them to be able to slide them. My car was pretty balanced so when I hit the ruts, it would get tight but not too crazy tight. Look, Dominick (Buffalino) was very good, but he just hit that hole in turn three and I was able to get by him. What’s weird is that I tried the bottom in the beginning, and I hit one of the holes and probably fell back a straightaway and I think it was him (Buffaliino) and Krachun and I was able to run them back down and at that point I just wanted it to stay green. I knew I had a good car; listen we had a good car the past two weeks as well but had problems. I knew I had a car that could win, I just needed to keep it together.

“The last two or three laps it started to take rubber and I didn’t know where he was at the time so I figured if I stayed in the rubber, I would be okay. Once I was in front, I didn’t want to push and just wanted to navigate the tricky track and get to where we need to get to. In this business you are only as good as your last race, and we have been pretty lousy the past couple of weeks but hey you are gong to endure during the year. Sometimes the crew gets down, but I try to keep them from doing that because we have had a fantastic year so far.”

The competition at BMP is fierce and Godown knows it is getting harder and harder each week to win.

“The drivers are getting faster and faster here, ” Godown mentioned. “They are also getting more aggressive which is good and bad but if we can just keep doing what we are doing, and the driver doesn’t make mistakes we should be okay. We have a new car all ready to go, but we really don’t want to bring it out yet. This car is so good right now that we don’t have to push it and bring it out yet, but we will once the track gets situated. The car we are running now is about a year old and has a lot of races on it and a lot of wins on it and until people start passing us in the feature, we’ll just keep on using it and not change anything. We also have a new motor coming from Billy the Kid and I am excited about that. Our second half of the year looks stellar.”