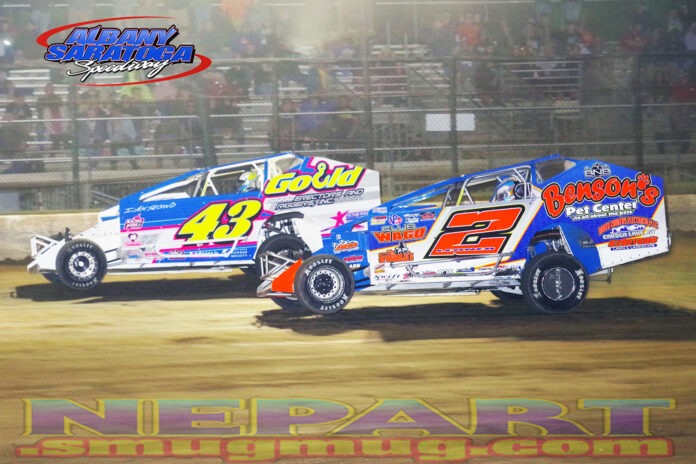 It’s about 140 miles to Elizabethtown, N.Y., from Ravena. 26-year-old Connor Marvin is working hard these days for Keith Flach and his No. 43 big-block Modified team as his new crew chief. Marvin, a native of Elizabethtown, has gained a pile of experience in his short tenure in the world of Modified racing. Prior to joining up with Keith Flach in the early spring of this year, Marvin cut his teeth for Mike Mahaney and with Mike Maresca.

“I feel like this is the best situation for me I’ve ever been in,” said Marvin over lunch last week. “The Flach’s are great people. I applied here for the job and I told them what I needed which was a job, a certain dollar amount and most importantly good health insurance. They checked all the boxes.”

In the last few weeks Marvin has experienced some highs and some lows in the racing ranks. He had terminal engine woes with the Flach 43 at the Memorial Day Super DIRTcar Series race at Lebanon Valley, only to rebound a few weeks later with the same engine and car with a win at Albany Saratoga. “We changed everything on that car while we were at the Valley and we couldn’t get it to go, but when we got it home we dug a little deeper only to find the distributor had gone south. We had changed the cap, rotor, wires, plugs at the track and even put a new fuel pump on it too and that didn’t help either.”

What’s most impressive about Connor is that as a child he, his brother and his mother all had heart transplants. “I had an enlarged heart and one day while I was in high school playing sports I had an implantable defibrillator and it went off about nine times in a row and I knew I was in real trouble. I ended up in Children’s Hospital in Boston and had a heart transplant after waiting several months for a donor to become available.”

A heart transplant is the most terrifying thing you can probably have done to you. “I’ll admit, I was scared deep down inside. Nothing could take my mind off what was going to happen to me” Marvin said.

The transplant gave him a new lease on life. An opportunity to live out his dreams of being involved in racing. However, the deeply emotional topic revealed that on the other side of him going forward someone had to stop going forward and give up their heart for whatever reason that may have been.

“I know who my donor was. Its a gift that keeps on giving, but I never forgot or forget that someone else gave up their life or had their life end so I could keep going. It’s the ultimate gift and I have not or will not ever be thankful enough for being able to have this opportunity,” said Marvin.

While growing up in Elizabethtown, Marvin was interested in fishing, hunting, some skiing and other related outdoors items but it was being at the race track and seeing the cars and the aural and visual effects that cars have on people that hooked him at an early age. “I was a really good golfer and had an opportunity to go to college on a golf scholarship and gave it up to go racing,” said Marvin.

“When people talk about planting roots somewhere, I feel like I can plant roots here with Keith and his family. They treat me like a member of their family. I feel included here. I’m given total control over the race car and its preparation. I don’t have to be constricted or wait for parts or things, they trust me to make the right choices to get the car race ready every week. There isn’t a lot of pressure put on me to produce results. I put my own pressure on to get to be successful. I want people to see that I was ready for this job and all that it entails. I have things to prove to people who may have doubted me in the past”.

One of the people who Marvin has impressed with his work ethic and knowledge is former Mr. DIRT Champion Tim Fuller. Fuller said Sunday at Devils Bowl when asked about Marvin he said, “that’s a guy that wants to do this type of thing. Wash panels, prep tires, scale cars, work on them everything to do with the car. There isn’t anyone like him anymore. He’s what we use to see about 25 years ago when people wanted to get into racing. Now no one wants to do this stuff or lifestyle anymore”.

With two cars to maintain weekly for two different race tracks, Marvin has his work cut out for him weekly. “I may take Sunday off to just recoup from the weekend of racing but come Monday I’m right back in the shop around 8 a.m. and I wash the cars, sweep out the trailer and organize things and then as the week goes along I get my maintenance done and any repairs and then on Friday morning I reload the Malta car and off to the track we go. Saturday I load up the Valley car and then its time to go to the Valley and then the cycle repeats itself all over again. There is always something to do.”