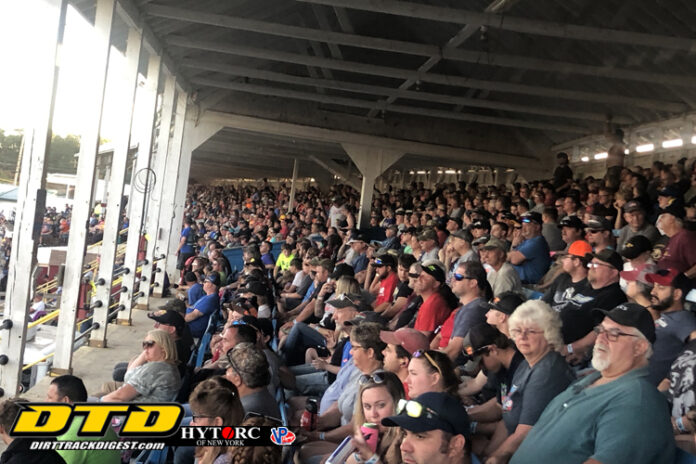 To start our Independence Day weekend on Friday we made the trip to Utica-Rome for the Thruway Series and enjoyed our time with Gene and Gloria Cole who were in one of the towers for the evening.  Gene is a big race fan and still enjoys visiting the track on many occasions.

We ran into Bobby Hackel IV who has made the Vernon oval his Friday night home this season and said he is looking at coming to Fonda on Saturdays now that he has parted ways with the Sharpe Motorsports team.  We caught up with him at the Schilling pit area 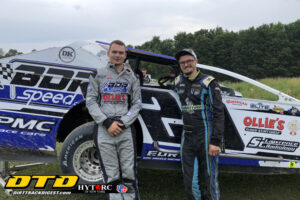 and snapped a photo of the two young stars as they talked over the nights qualifying events that had just taken place.  David Schilling is now sporting the BDR Speed Shop sponsor logo on his No. 20 and the Ollie’s (Good Stuff Cheap) also a new sponsor that he will carry more prominently when BD Motorsports travels south for the Cajun Series.  Unfortunately for Hackel on Friday he suffered mechanical difficulties in the feature meaning more work for the crew on the No. 97.  By Sunday, the Hackel team had recovered and came to Fonda with their small block, which proved to be a good choice for the Firecracker 50 event.  Hackel ran with the top ten most of the 50 laps but lost a couple spots in the waning laps to finish 12th.  The team is waiting for a motor, currently in transit. 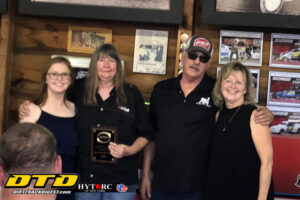 Matt Sheppard suffered engine issues in his heat on Friday and was able to secure a ride for the feature from Justin Wright; he started in the final starting position and made his way to tenth.

Saturday was Hall of Fame night at Fonda and the 3:00 pm induction ceremony was very well attended.  There were some very interesting stories that came out of the induction presentations for all of the inductees, Tim Clemons, A. J. Romano and Steve Welch.  During the presentation of the Bruce Dostal Dedication to the Museum award Jackie Lape made the announcement that recipients, Alton and Carole have official permanently donated the No. 12a to the museum, the final car that Jack Johnson drove.  Also given the Bruce Dostal award was the Canajoharie Eagles Club who had given a PA system to the museum and came Saturday with a $500 check for the Fonda Kids’ Club. 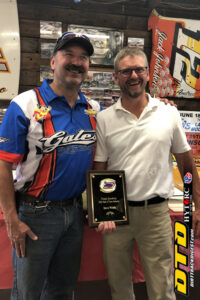 Steve Welch.  During his reception of the award, Welch had many tales to tell about his times at Fonda and the lessons he learned in racing.

John Lakata reminisced about his times with A. J. Romano and crew and later the crew members on hand got together for a photo outside the museum.

When the racing began we noticed two throwback packages on two in the Modified ranks, Rocky Warner was driving an A. J. Romano No. 16 retro paint job on his car and Demetrios Drellos came with the Drellos No. 111 retro tin, red and white from the early days of Fonda when his grandfather owned the No. 111 driven by Kenny Shoemaker, Paul Marshall, Jeep Herbert and Pete Corey. 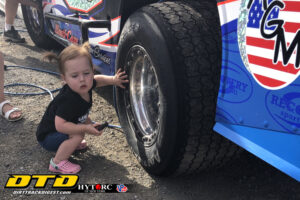 Found a very cute member of the Gleason/DeLorenzo pit crew, Isla Gleason missed her dad’s first win a week ago but came on Saturday to lend a hand in the pits and as you can tell by the look on her face, she is very serious about her work.

The Mohawk Valley Vintage Dirt Modified Series was on hand on Saturday at Fonda and Jack Miller won the Vintage Modified event.  According to Miller when we saw him the next day, the win was 49 years since his last win at Fonda, July 7, 1973, when he won a rained out feature, the regular feature plus a heat race.  The MVVDMS has developed quite a following and has gained popularity wherever they go. 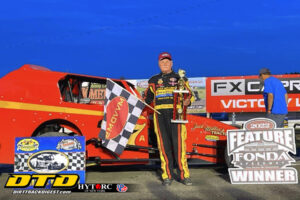 On Saturday the MVVDMS announcer, “Denim Dan” Haslun was being tutored by veteran or we could call him “vintage” announcer, Jim King, who had made the trip north from his home in Florida, to celebrate his 50th year as an announcer in motorsports.  Jim was presented with a plaque by the Fonda Museum and some kind words from current Fonda announcer, Chris Moore, during the Hall of Fame ceremonies.

By Sunday, the weather was beautiful and the fans came out in full force to enjoy the Firecracker 50, many of them happy to see Stewart Friesen take the win and a few that weren’t happy.  Rocky Warner won the 602 Crate Sportsman event with the Brian Calabrese, No 21C.

We know for sure, there was a large crowd of fans that enjoyed both Saturday and Sunday’s events. And we know many of them were first time fans to Fonda because of all the Fonda Speedway merchandise we saw moving out of the Fonda souvenir store. 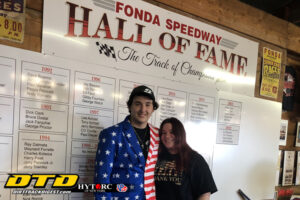 One first-time fan to Fonda was Austin Thomas who we found in the museum before the racing on Sunday.  Austin was ready to celebrate the July 4th holiday and his first trip to Fonda with his friend, Jocelyn Meade.

And we also give a shout out to Denise Page and her concession crew for the great food as always and the excellent service in getting things out to feed the huge number of people standing in the food lines.

We also need to commend the 50/50 sellers at Fonda both Saturday and Sunday, they do a tremendous job and some lucky fans went home both days with a pocket full of money, $3096 on Saturday and $4209 on Sunday. 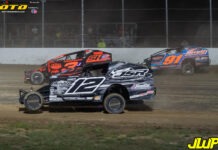 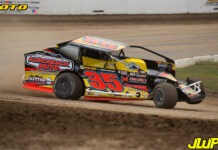 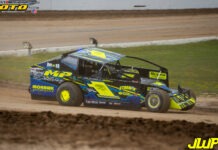