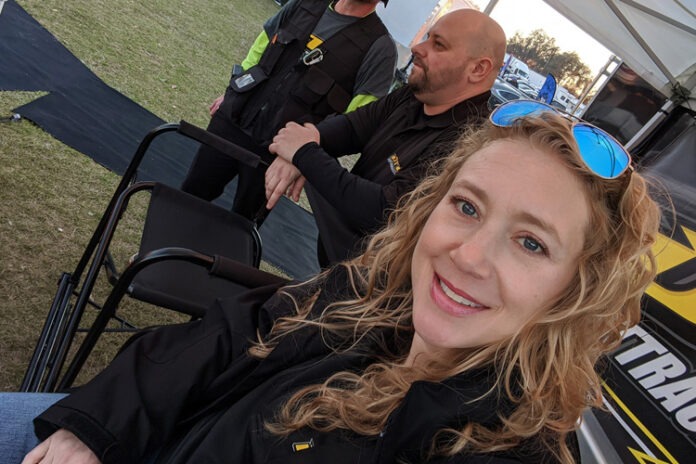 On Wednesday, July 20th, Melissa “Mimi” Lazzaro will be honored for her commitment to motorsports as recipient of the Outstanding Woman in Racing Award. It is part of the Northeast Dirt Modified Hall of Fame ceremonies at the Hall of Fame Museum located on the grounds of Weedsport Speedway in New York.

Many in the racing community remember Mimi long before she remembers any of us. Her mom, Sheila, would have the infant trackside, watching her dad, four-time Fonda Speedway champion Lou Lazzaro, compete every week. Before children were commonplace at speedways, everybody knew Mimi, the youngest of his six.

Unfortunately, Mimi’s memories of her dad’s glory years are nonexistent—by the time she was born, Lou was well into his forties; his storied racing career was already winding down.

“When I was growing up he was definitely past his prime and not traveling as much,” recalled Lazzaro. “He was always a low-budget guy but I feel like he struggled more in the later years when I was around.”

Growing up, Mimi loved hearing about her father’s exploits and those of his contemporaries.

“I’ve heard all the stories,” said Mimi, who hung on every word as a kid wanting to know more. “Guys like Steve Danish and Ernie Gahan were long gone by the time I was born but I knew who they were! My father’s best friend, Junior Bianco, is still alive. He tells me stories all the time, and talks about guys from back in the day. That helps me have an appreciation for where they came from.”

Lou Lazzaro passed away in 2000, in competition right until the end. Mimi was 19 years old.

With her dad’s death leaving a huge hole in the sport and in her heart, it all didn’t feel the same to Mimi. For a time, she drifted away from the tracks.

Ultimately, she met with Ric Lucia, then the promoter at Fonda and a big fan of her father, proposing the idea of mounting a memorial event in honor of Lou. She organized the event and Lucia was impressed enough that he offered Mimi a steady gig: starting off each race night singing the national anthem, and ending each event handling victory lane interviews with the race winners.

Lazzaro has a bubbly personality, is enthusiastic about the sport and understands the people, so she was a natural fit for the role. She knew it was her calling in 2010, when she got a chance to announce a national event. Mimi was at the Chili Bowl with her uncle, who entered her in a fan auction to announce a qualifying race. She won that opportunity to take the microphone—and the rest is history.

The local FOX news affiliate was airing a weekly racing segment—“FOX23 Fast Track,” produced by Scott Morlock. “I wanted to make a demo tape of interviews to send out with the goal of working for MAVTV,” Mimi explained. “So Scott was going around videoing me doing interviews and singing the national anthem.”

She began working with the team at Race Pro Weekly, and kept trying to get her name out there.

Then in 2018, rising racing promoter Brett Deyo was taking over the reins at Fonda Speedway and held a meeting open to all who wanted to be part of his new venture. Mimi was in attendance.

“I had never met Brett before and he walked up to me and said, ‘I want you back—I want you to do the victory lane interviews next year,’” recalled Mimi. “I was floored that he asked and told him I would think about it.”

It took a quick minute and she was questioning her noncommittal.

“What was I thinking about? This was my passion! This is what I love to do,” said Lazzaro, who considered, “I’m getting older and I’m not going to have much more time to do this because younger people are coming up.”

And you know Mimi: she has her hands in everything at the track.

She will help cook food, if needed. Has been seen selling 50/50 tickets. She put up a bounty [“Mimi’s Bounty”] on Stewart Friesen’s head a few years back which raised money for autism. She volunteers her time at the Fonda Museum, and she also does pit reporting and color commentary with the broadcast team at DirtTrackDigest.TV, which airs on Flo Racing and MAVTV.

In a perfect world Mimi would be chasing racing—traveling as a roving reporter on Deyo’s Short Track Super Series with the DTDTV group. But the reality of needing health benefits keeps her tied to a full-time occupation locally.

Forging on, Mimi has been taping behind-the-scenes segments featuring women racers and personalities in the sport.

“I would love to be like Jamie Little in NASCAR or Wendy Venturini—those are two woman I really look up to in the racing community,” said Lazzaro, one of the only woman announcers currently covering the dirt Modified division.

“My goal is to be as informative as I can without sounding like a stuffy statistic person. I’d really like to keep my personality involved with all of that,” she said of her end goal. “I think some people like that and some people dislike that. So it’s about trying to find that happy medium.”

But she admits it is not easy. “It is tough being a woman in a male-dominated sport—I’m not sure a lot of people see that,” Mimi conceded. “I’m trying to bring more awareness to that.

“I try to be knowledgeable in what I’m doing—and hope people get it.”